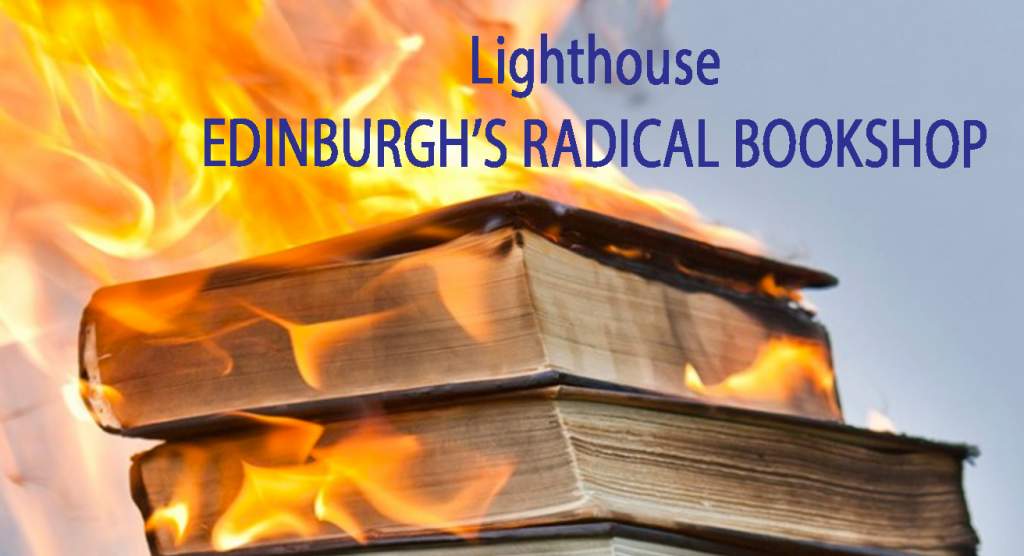 If Edinburgh is the Athens of the North, it deserves an Athenian bookshop rather than a Jerusalemite crematorium.

For some days now I’ve been feeling a little bored because my new book Being in Time didn’t seem to be attracting any real opposition. My arch-enemy Alan Dershowitz declined calls to disrupt my USA tour which, in fact, was a great success and all-in-all, the launch of the book seemed to be going smoothly, on the verge of going snooze-ly.

But seemingly everything changed.

Yesterday, on my way to the event in Cluny, Newcastle I learned that the music venue had capitulated to the Zionist lobby’s pressure. Cluny’s manager, Joel Thomson, told me over the phone that they had received two emails and had decided to withdraw. It took a local friend around five minutes to trace a new location. However, when I arrived at The Cluny around 6.30 PM (to divert the traffic to the new location), I ran into some appalling behaviour by staff members and the owner.

But the Cluny wasn’t a big surprise. Two days ahead of our Edinburgh literary event, David Scott and myself received a cancelation email from Mairi, the owner of the Lighthouse ~ Edinburgh’s Radical Bookshop.

Now, before I go on, let me assure you, we are still, as planned, meeting this evening at 7.30PM near the Lighthouse ~ Edinburgh’s Radical Bookshop. From there, we will then walk to a new venue that tolerates intellectual exchange – something contemporary ‘radicals’ seem to struggle with.

In her email, and later in her official statement, ‘radical’ Mairi tells us all we need to know about the level of her argumentation. It is an insult to the notion of intelligence.

“It was only brought to my attention today that the event would coincide with the beginning of Shavuot,” Mairi writes,  “and as a result many Jewish individuals who might have wanted to attend to challenge Gilad, would not be able to do so. To exclude members of the Jewish community from a controversial discussion on Jewish identity and politics instinctively felt wrong.”

Leaving aside that my new book doesn’t focus on Jewish ID politics or Judaism per-se, I found myself wondering whether ‘radical’ Mairi would be as insistent on ‘Nazis’ attending a literary event that was critical of Adolf Hitler and his ideas. Would ‘radical’ Mairi similarly insist on inviting Isis enthusiasts to events that were critical of the Islamic State? Or is it only Jewish sensitivities that concern ‘radical’ Mairi?

My guess is that this most ‘radical’ owner of this most ‘radical’ bookshop must adhere to the most extreme form of Zionist privilege – something of a happy coincidence since my new book, Being in Time actually identifies the roots of this exact same Zionist bent at the very core of New Left ‘radical’ thought.

“Gilad”, she writes in her email,  “although I do not believe that you are a hate speaker, I have no doubt that in affiliating yourself with some far right speakers who are openly holocaust deniers, you have undermined your ability to engage in a productive debate about current politics.”

You know, you’d think that the owner of a radical political bookstore would know that in the real world there are no Holocaust deniers: no one with half a brain has ever denied  that Hitler opposed the Jews and wanted them out of Germany and Europe. No one has ever denied that Jews suffered hugely under Nazi occupation and no one denies that Jews, because of the Holocaust, succeeded in stealing Palestine.  Some people, however, do indeed question the technicality, practicality, factuality and the meaning of Hitler’s anti-Jewish measures. Zionists often refer to these people as Holocaust deniers’ but in practice, the intellectual field in which those ‘deniers’ are submerged is  historical revisionism.

I am proud that I have argued forcefully in support of revisionism. I argue that if history is the attempt to narrate the past as we move along, then making history into a meaningful adventure must entail re-visiting, re-writing and, in practice, revising the past. True history, therefore, is always a revisionist adventure. This applies not just to the Holocaust but to every single event in the past including slavery, the Nakba, the Holodomor and so on.  Unlike ‘radical’ Mairi I oppose the Holocaust being reduced to a religion. If the Holocaust is our new Western religion then I for one insist upon being an atheist!

Marie adds “I believe that your views lend credibility to far-right anti-semitic groups even if you do not consider yourself an antisemite.”  But my writing and my thoughts are published and endorsed by many of the most respected intellectuals and humanists  along the entire political spectrum. Being in Time’ is, as it says on the cover, a post-political manifesto. It suggests that the political dichotomy between Left and Right is dated, meaningless and irrelevant and in my universe, thinkers are divided by the merits of their arguments and not by their left/right political affiliations. I don’t ‘denounce’ people as some leftists insist I should. I engage in scholarly dialogue with  people of all political persuasions and if I don’t agree with someone, I do not denounce, I criticise. For me, humanity is that which crosses the divide rather than hiding behind ghetto walls.

But it gets worse. Mairi also claims to have been harassed by people who support my work. But the cancelation of the event was posted on the bookshop’s site on Saturday night when the shop was closed. There was no reason for anyone to assume that our event was cancelled, or about to be cancelled. Moreover, in my entire career, neither myself nor any of my followers have ever been associated with a single violent or unsavoury incident to do with my work. So Mairi is lying and this shouldn’t take us by surprise. Within Left circles, lying for the ‘cause’ is an entirely kosher procedure. Again, this tendency is studied closely in ‘Being in Time.’

But to be fair to Mairi, she was indeed subjected to some intense pressure – but the pressure came, not from any supporter of mine, but from the notoriously tyrannical Mick Napier.  Napier opposes anyone who points out the obvious fact that if Israel defines itself as the ‘Jewish state,’ then we’d better ask ourselves what the ‘J word’ stands for. It is so for years, the ever-marginal Napier and his miniature SPSC, have been desperate to disrupt my events in Scotland (music as well as intellectual) – and, of course, always in the name of ‘Palestinian solidarity’.

It is almost funny the way Napier campaigns for free speech on Israel whilst working 24/7 suppressing free speech here – especially if it should focus on Jewish power. Who really is he working for? Again, ‘Being in Time’ offers a theoretical foundation to help us to grasp this type of activity and all other forms of controlled opposition.

So what do ‘radicals’ like Mairi and Mick Napier mean by ‘free discourse’? Our ‘radical’ bookshop owner offers an answer: “We are a platform for open discourse, but I intend to give a platform to speakers I support who might not otherwise have a venue, that is my choice and my right.”  So, ‘radicals’ allow free speech – but only to those with whom they agree. This is not exactly a plan for popular resistance, more a guide to ghetto building. But at least we now know why the revolution never happened.

And finally, if you’re wondering what is it that has, within Left and radical circles, led to such intellectual regression and how come a radical bookshop so easily transforms itself into a book-burning pyre?  Again, my new book provides the answer. It is the suppression of Athens and the invasive power of Jerusalem that has murdered Left tolerance and all revolutionary thinking.

If Edinburgh is the Athens of the North, it deserves an Athenian bookshop rather than a Jerusalemite crematorium.