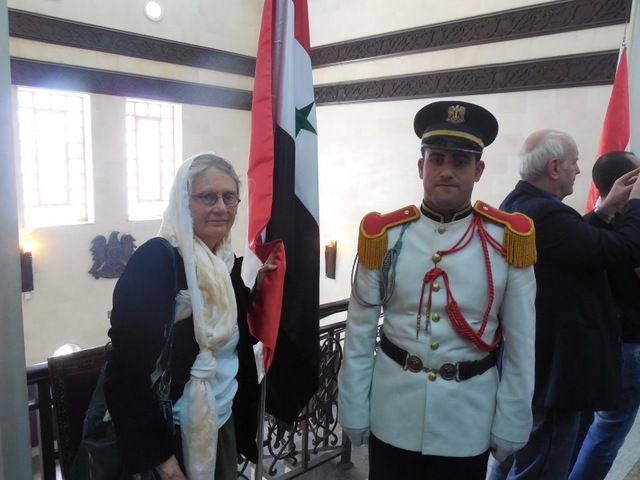 [ Editor’s Note: Jane Stillwater is a trip, literally, and one hell of a lady. She seems to be an old hippie that never bothered to blend in with the crowd, and thank god for that, as she is one of a kind. She was part of our ten-person US crew invited to be election monitors (35 worldwide) for the 2014 Syrian elections, my first trip.

One day we were crowd-watching in the huge lobby of the Dama Rose Hotel in Damascus, a modern version of “Rick’s Cafe” out of Bogart’s Casablanca movie, including the cigarette smoke. I did not hear how it got started, but her passport was being passed around, with people thumbing through the pages, which took a while.

Jane had been like everywhere, and I don’t mean touristy-type places, but REALLY out-of-the-way places, some of them that I was not even aware they were countries. She traveled light, too…less than a backpacker. And she had photos to prove it, of places you and I will never see. But National Geographic photos were not enough for this lady. She had to be there.

She even went to Iraq during the war, and got out to the troop base areas. She has a knack for getting into places, despite whatever the rules are. People are taken with the grandmother and bag over her shoulder going around the world and doing some interviews now and then. She has her book list at her block link.

Needless to say, she has some people skills, and was destined to be a blogger to share not only her trips but her wit, which is why I am posting this one. Enjoy Miss Jane. I hope I see her one day again, maybe on the road somewhere in a backwater place. That would be cool… Jim W. Dean ]

– First published … May 27,  2017 –
–
In 2001, all we ever heard about in the media was how America was going to “free Afghanistan for democracy.”  Sixteen years and several trillion dollars later, Afghanistan should be as free as a bird now, right? So I went to Expedia.com and clicked on “flight + hotel” to Kabul.  Nothing came up.  Afghanistan is so very free these days that American tourists can’t even go there.  Hell, even war correspondents can’t get in there either.  Hmmm.

But what about Iraq, the country that America spent approximately five trillion dollars freeing from that evil dictator what’s-his-name. Plus when I was a kid, I had always dreamed about being an archeologist when I grew up and going to see places like Babylon and Ur.

Now was my chance! So I went on Travelosity.com and clicked on “flight + hotel” to Baghdad. Sorry but American tourists aren’t free to travel to Iraq either.

Libya? Same old story. America spent a trillion or so dollars on liberating Libya from Qaddafi “for humanitarian reasons”. Well, things are so humane over there right now that not even CheapTickets.com can get you a “flight + hotel” to Tripoli. Where else has America been liberating stuff? Ukraine? Let’s plug that one into Kayak.com and see what comes up. Nope, Nothing there either.

Yemen? America just sold the Saudis billions and billions of dollars worth of deadly weapons in order to “liberate” Yemen’s oil. But Priceline.com wouldn’t touch Yemen with a ten-foot pole. The Saudis have already dropped 90,000 bombs on Yemen so far. Yemenis are resisting the Saudis’ offer of “freedom” just as hard as George Washington resisted the British during the American Revolution. But then King George III hadn’t dropped 90,000 bombs on Betsy Ross’s head either. No nice hotel in Sanaa for me.

How about Palestine? America is paying 30 billion bucks a year to help Israeli neo-colonialists “free” Gaza. But if you type “Gaza” into Hipmunk.com, your whole computer might just blow up. No freedom in Gaza either. They are not even letting reporters into Gaza. “Closed military zone.” Being a war correspondent sucks eggs these days — let alone being a tourist.

Syria? Let’s click on Trivago.com. The only place we can safely go there is to Damascus and Aleppo, where Syria’s so-called “evil dictator” is still in charge. But no one can go to the parts of Syria freed up by the freedom-loving USA and their allies ISIS and al Qaeda.

And now the American Deep State and its puppets in Washington are talking about “liberating” Russia, China, North Korea and Venezuela. Pretty soon American tourists will consider themselves lucky if they can even safely travel to Tijuana.

PS:  According to William Engdahl’s new book, The Gods of Money, World War I and World War II were welcomed and even encouraged by the US corporatocracy in order to weaken Europe.  “American leading circles around the Rockefellers and Wall Street had resolved among themselves that all potential European rivals for power would have to grind themselves down in a mutual slaughter.”
–
Now that same corporatocracy is currently plotting World War 3 in order to weaken Russia and China. “Hey, it worked before. Let’s try it again.” And you know what this means, don’t you? After Russia and China are finally as “free” as Iraq, Afghanistan, Gaza, Honduras, Somalia and Libya, there will be no more trips on the Orient Express railway for American tourists either.
–
PPS:  I’m going to be an American tourist myself this week — going to New York City, staying at the legendary Jane Hotel, eating rice pudding at B&H Dairy on Second Avenue and attending the 2017 BEA Book Expo.  https://www.bookexpoamerica.com/About-Us/
–
And guess who will be speaking at the Book Expo? Hillary Rodham Clinton! Yes, the darling of the Deep State herself will be telling us in her very own words about how “free” Libya became on her watch and just how much she would love to bomb Russia.