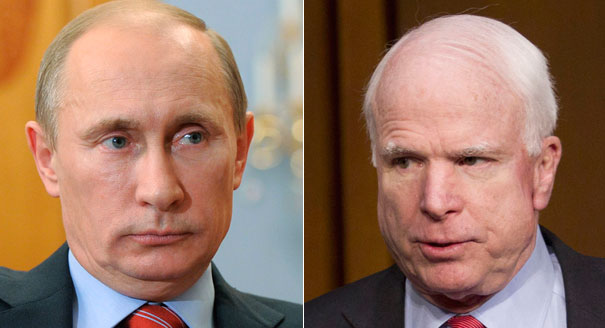 Who is the real opportunist here?


We all know that John McCain is not morally and intellectually sober. He has been struggling mightily to construct reasonable policies for years, but he is still a pawn in a diabolical matrix largely because he has been told what to think and what to say.

As we have already noted in previous articles, McCain received at least 1 million dollars from Saudi Arabia. He was also in cahoots with the Rothschilds, one of the most powerful families in the history of social and political engineering in the West. We argued last February that the Rothschilds own John McCain.

So, you can sign McCain a check for a million dollars, and you can be sure that he will say just about any crazy or dumb thing in the media. In fact, he has been doing that for years.

But it seems that McCain is destined to use the New World Order ideology to perversely attack Vladimir Putin. This is McCain at his best:

“I think ISIS can do terrible things. But it’s the Russians who tried to destroy the fundamental of democracy and that is to change the outcome of an American election. So I view Vladimir Putin — who has dismembered Ukraine, a sovereign nation, who is putting pressure on the Baltics — I view the Russians as the far greatest challenge that we have.”

Read the statement again and ask yourself this question: Where is the proof that Putin is “the greatest challenge” that America has? Did McCain offer any evidence?

McCain perversely postulated that there is a “need for us to win in Mosul, to win in Afghanistan, win in Raqqa and beat back this threat to our nations’ national security, which we just saw a manifestation of the problem in Manchester.”

Translation: “There is a need for us to create more chaos in the Middle East, to bludgeon decent American soldiers to death, and to send another six-trillion dollar bill to taxpayers. I don’t give a damn about what the vast majority of Americans think. I don’t give a damn about a Yemeni child who was killed as he tried to flee a navy seal raid.[1] I just care about fulfilling the desires of the Israeli regime and the Neoconservatives in America.”

If you don’t think that this is what McCain is basically saying, then keep in mind that six years after the debacle in Iraq, it was reported that “up to 360,000 Iraq and Afghanistan veterans may have suffered brain injuries. Among them are 45,000 to 90,000 veterans whose symptoms persist and warrant specialized care.”[2] That doesn’t even include countless deaths in the Middle East at all.[3] That doesn’t include Sodomy in places like Abu Ghraib.

One final point. It was estimated that 26,000 people were sexually assaulted in 2012. 19,000 were assaulted in 2010.[4] These figures could be higher, since many victims fail to report that they were assaulted.[5] When the facts became widespread, McCain said that women should avoid the military.[6]

McCain couldn’t address the real issue because that would have ruined his entire diabolical enterprise. Obviously this man needs to be behind padded cells for the rest of his natural life.

[4] Nick Schwellenbach, “Fear of Reprisal: The Quiet Accomplice in the Military’s Sexual-Assault Epidemic,” Time, May 9, 2013; Elspeth Reeve, “The Military’s Rape Problem is a Lot Like Everyone’s Rape Problem,” Atlantic, May 7, 2013.