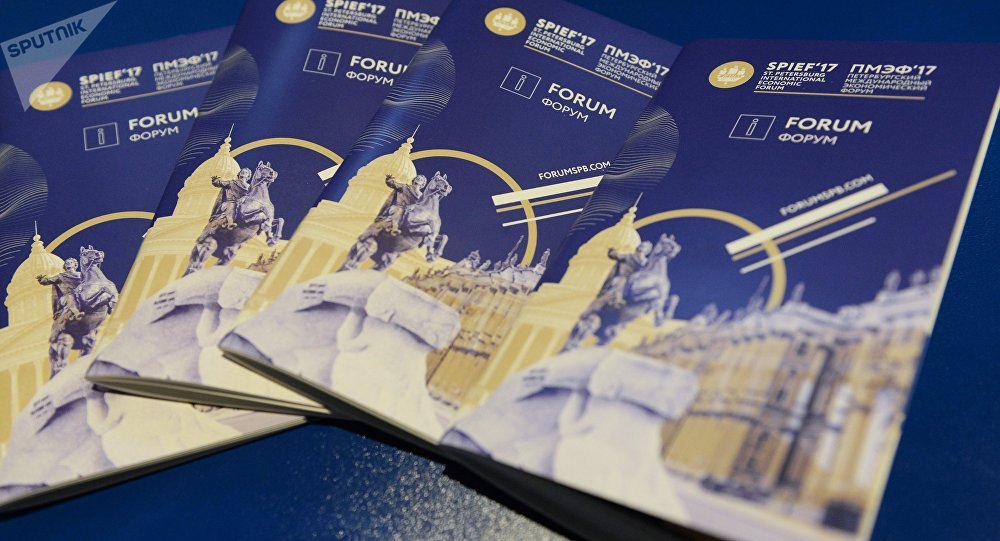 [ Editor’s Note: Once again we have Putin at another major Russian world forum where he can talk without a teleprompter to a diverse audience in the style of Roosevelt’s fireside chats, minus how they were written for an eight grade education level. Putin’s style is, if you cannot understand it at a reasonable intellectual level then you can never really be part of a solution so you don’t matter. You are just along for the ride.

No world leader can discuss geopolitics or the “fake” military threat scams better than Putin, and you will see below how he explains, politely, that it does not take a genius to figure this out. We have a long post-Soviet track record to look at  both the East and the West, and who the real aggressor has always been is a slam dunk.

The shame here is how the huge fortune in Western education seems to have been wasted when preparing people to see even obvious long running scams by their respective governments, including the age old “divide and conquer” tool so loved in allegedly democratic countries.

Western Press only covers these Putin events lightly as they don’t want their constituencies to seen the obvious comparison with Putin and their own leaders. The idea of our having a free press any more is a joke anyway. Any that exist are anomalies and in the cross hairs constantly, such as VT who continues to have a total blackout in the US and Europe.

Putin’s cruncher below is his statement that if North Korea were to de-nuclearize, the US missile defense system would still remain as a new justification for it would be invented. What I love most about Putin his his ability to deliver a “white paper” on a topic in one sentence. He does not waste his or our time.

The comparison between Putin and Trump in terms of geopolitical talent would be comparable to Galileo and an amoeba. Yes, it is that bad. We have Politico this week reporting how down in the dumps Trump is after his European trip, that it was too long, and it has become obvious even to him that he is in way over this head, and being president is not going to be one bit of fun. It really isn’t like being a reality TV show host … Jim W. Dean ]

Russian President Vladimir Putin says the expansion of US missile systems across the world is a “challenge” to his country and necessitates Moscow’s response in the form of a military build-up in the region.

Speaking to reporters on the sidelines of St. Petersburg International Economic Forum on Thursday, Putin said Russia cannot stand idly by while others increase their military capabilities along its borders in the Far East and Europe.

“They have elements in their ABM (anti-ballistic missile) system in Alaska and now in South Korea. Do we have to look at this helplessly and do the same in Eastern Europe? Of course not. We contemplate our response to this challenge,” Putin said.

He further noted that Moscow’s build-up in the Russian Far East, particularly the Kuril Islands in the Pacific Ocean, was not “Russia’s initiative,” but rather caused by concerns about the US military presence in the region.

The US used to justify the deployment of its missile systems in Europe using the alleged threat posed by Iran as a pretext, but the 2015 nuclear deal removed that excuse, Putin said.

Iran’s nuclear agreement, known as Joint Comprehensive Plan of Action (JCPOA), was signed between the Islamic Republic and the five permanent members of the United Nations Security Council — the US, France, Britain, Russia and China plus Germany — on July 14, 2015. Under the JCPOA, Iran undertook to put limitations on its nuclear program in exchange for the removal of nuclear-related sanctions imposed against Tehran.

Elsewhere in his remarks, the Russian president said the US was using the North Korea threat as a pretext to justify its missile deployment in Asia-Pacific.

“It’s not about North Korea. If tomorrow North Korea declares it is stopping nuclear tests and canceling its rocket program, the US will continue building its ABM system under some new pretext or without one at all,” Putin said, adding, “This issue (the US military build-up) is a major concern for us and we have been constantly voicing it for decades. This disrupts the strategic balance in the world. But the world is silent and nobody listens to us.”

Elsewhere in his remarks, the Russian president said Russophobia in the West was related to the “emergence of a multi-polar world, which the monopolists dislike.”

He also expressed hope that the anti-Russian sentiment would “not last for too long, not forever, if only because the understanding has to come that it is counterproductive and harms everyone.”

Putin further emphasized that attempts to deter Russia don’t work. Some countries have been taking measures against Russia such as economic restrictions aimed at “holding it back from defending its legitimate national interests…. And now they see that this practice doesn’t work. It is counter-productive and has no effect at all,” he said.

‘Russia not involved in hacking’

Putin also stated that the Russian government had never been involved in hacking activities, saying, “We don’t engage in that at the state level.” He said “no hackers can influence election campaigns in any country of Europe, Asia or America.”

The US government has accused Russia of hacking Democratic party emails to help the campaign of Republican President Donald Trump. Russian officials have repeatedly denied the claims that Moscow tried to influence the 2016 US presidential election.