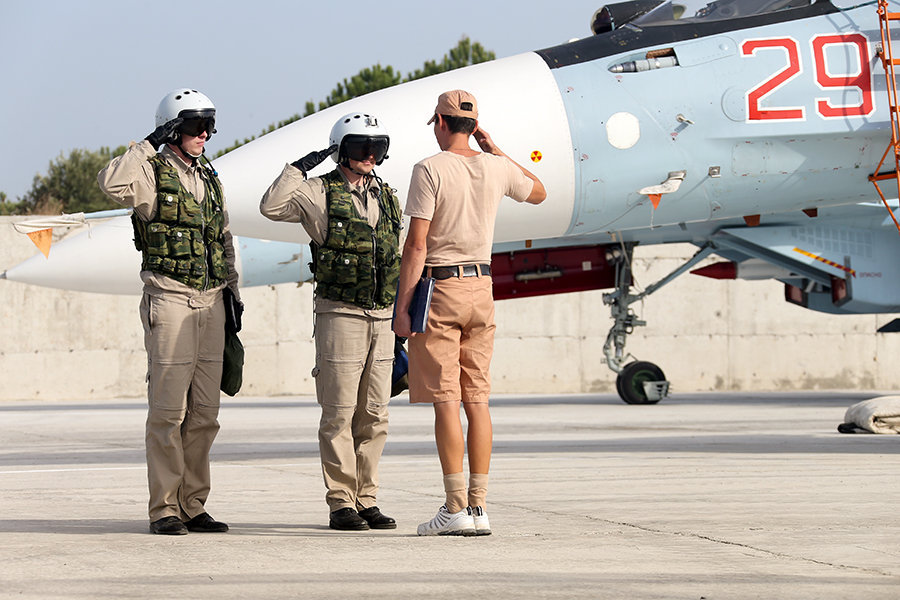 [ Editor’s Note: There has been no professional appraisal in Western media as to the efficiency and effectiveness of the relatively small Russian air contingent it has in Syria. Remember that Putin had downsized it after the “safe zone” deal was announced, as a de-escalating gesture.

Typically this can only be done by have multiple crews for each plane. While one is flying back from a mission, new pilots can be standing by with a new sortie already selected for them to strike. The ground turnaround time is basically getting the plane refueled and rearmed.

Long buried in the news months ago is the Russians publicizing that virtually their entire fighter pilot list was could not be considered combat experience pilots. This has always been considered a force multiplier, but primarily so for air combat experience. But that said, drills are drills and live mission experience is the real deal where building confidence comes from, and things like air gunnery experience for the helicopter pilots.

ISIS may have felt that splitting up into three convoys would get two of them through, but they were wrong. Even two had gotten out they would have been bombed wherever they had staged themselves at. The Russians have had total surveillance over the battlefields for some time now, as has the US coalition, which has also been getting some live fire experience.

And lastly, we have the report from the FSA jihadis that attacked the SAA troops in the SE Syrian desert that they attack failed due to six Russian planes bombing them in the middle of their attack. That is what you call a ready reaction force, because these US militants tipped their hand with their night time grad missile attack.

The big part of the story is that US planes did not intercept the Russian strike.  Was this due to a “de-confliction” agreement between the two for the SE Syrian theater?  We will be watching closely how this develops, as one big mistake could spin the current war off its axis onto a totally new one, like widening the war... Jim W. Dean ]

Russian warplanes have destroyed three ISIS convoys fleeing Raqqa, the Russian Ministry of Defense (MoD) claimed in a statement on Thursday. According to the MoD, the convoys were attempting to escape from Raqqah in the southern direction on Monday but this was prevented by the Russian Aerospace Forces.

As a result 80 ISIS terrorists were killed and 36 vehicles, 8 fuel trucks and 17 pick ups equipped with mortars and machine guns were destroyed.

“The Command of the Russian Air Force group in Syrian Arab Republic warned that any efforts of ISIS’ insurgents to leave Raqqa through the open corridor to Palmyra will be suppressed.

The first insurgents’ convoy which was heading from Raqqa to Palmyra Russian aviation eliminated on the 25th of May.

On the night of 29 30 May militants took another shot to advance to Palmyra. Three mechanized convoys full with insurgents in the darkness left Raqqa and headed to the South on several routes.

Our intelligence revealed this movement in due time. The Russian Aerospace Forces stroke detected targets,” the statement reads.

The Russian ministary added that the US-led coalition and US-backed forces are maintaining an open corridor for terrorists south of the city of Raqqa.

“The city is cut off from the north. In the meantime, SDF stopped its advance and it resulted in leaving breaches in defense lines south off Raqqa. Using that, terrorists are freely crossing Euphrates and trying to redeploy their units to the Southern Syria.

The Command of the Russian Air Force group in Syrian Arab Republic will continue to take all necessary measured in order to prevent any ISIS’ forces to leave Raqqa and move to Homs and Hama provinces.“