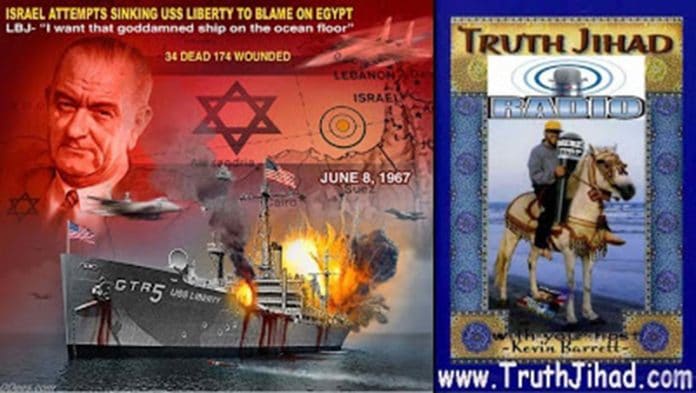 “This is dedicated to my fallen shipmates and to all patriotic Americans who, when they read this book, come away shocked and dismayed as to how the U.S. government lied to the American people about the cold-blooded murder of Americans on the high-seas, a cover-up perpetrated not just by them but by the government of Israel as well. Fifty years is far too long. From LBJ to Barack Obama to all the congressmen and women who bow down to Israel first and could care less about taking care of America—which they took an oath to do—all have become bootlickers to the Zionist state of Israel.”

Second hour: Ian Greenhalgh joins us from the UK to discuss the likely Manchester false flag, whose perp/patsy, Salman Abedi, has been linked to the British Intelligence (MI6) mercenary outfit “Libyan Islamic Fighting Group” (LIFG). Was the Manchester bombing designed to stop 9/11 truth supporter Jeremy Corbyn’s surge, and deliver the upcoming UK elections to Theresa May? It sure looks that way…

We also discuss related issues, including Zionist power in the US and UK; the Israelis’ and others’ use of miniature nuclear weapons; and the 9/11 nuclear demolition hypothesis, as explained in the VT Nuclear Education Series.