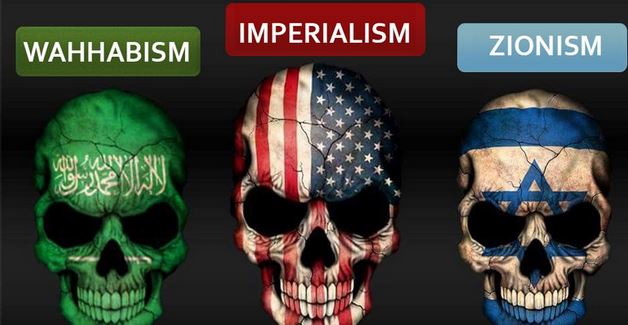 Some ideas are so dumb that only a politician and Israeli puppet in Washington could believe them, for no ordinary man could be so dumb. Get this: Donald Trump has recently asked the U.S. Supreme Court to revive the president’s controversial executive order that intended to temporarily ban travelers from six Muslim-majority countries.[1]

What were the countries that Trump wanted to ban? Iraq, Syria, Iran, Libya, Somalia, Sudan and Yemen. Those are the countries that America destroyed or helped destroy. Iraq was literally obliterated in 2003; America is still supporting the Syrian rebels/ISIS in Syria; Iran was overthrown in 1953 by an Anglo-American coup; Libya was completely destroyed in 2011; Yemen is being destroyed by America’s terrorist ally, Saudi Arabia; and we just don’t need to talk about Somalia and Sudan.

“We have asked the Supreme Court to hear this important case and are confident that President Trump’s executive order is well within his lawful authority to keep the nation safe and protect our communities from terrorism. The president is not required to admit people from countries that sponsor or shelter terrorism, until he determines that they can be properly vetted and do not pose a security risk to the United States.”[2]

Flores is not a dummy. She graduated from Harvard Law School (J.D.) and then “clerked for Chief Judge Edith Jones of the United States Court of Appeals for the Fifth Circuit.” But she cannot see that Trump’s plan here is morally and politically incoherent and worthless.

Does the administration really want to ignore the fact that Saudi Arabia is still involved in covert operations in the United States?[3] Didn’t Trump himself unequivocally declare throughout the presidential campaign that Saudi Arabia was involved in 9/11?[4] Trump said in February of last year:

“Who blew up the World Trade Center? It wasn’t the Iraqis, it was Saudi — take a look at Saudi Arabia, open the documents.”[5]

On the same day, Trump reiterated:

“It wasn’t the Iraqis. You will find out who really knocked down the World Trade Center, ‘cuz they have papers in there that are very secret. You may find it’s the Saudis, okay? But you will find out.”[6]

In 2012, former senator Bob Graham of Florida, who headed the 9/11 inquiry, declared in an affidavit, “I am convinced that there was a direct line between at least some of the terrorists who carried out the September 11th attacks and the government of Saudi Arabia.”[7] There are more devastating reports:

“An accused al-Qaida bomb-maker who went to college in Arizona told military officials at the U.S. base in Guantanamo Bay, Cuba, that he believed an unnamed member of the Saudi royal family was part of an effort to recruit him for violent extremist acts before the Sept. 11, 2001, attacks, according to a newly released transcript.”[8]

Numerous scholarly reports indicate that Saudi Arabia was involved in the 9/11 attack.[9] But the interesting thing is that Trump did not only exclude Saudi Arabia from his travel ban. In fact, he ended up making an essentially diabolical deal with the terrorist state. Does Trump really want people to take him seriously? Will he ever stop listening to the Neocons? Will he ever come to his senses and start firing the warmongers and terrorist apologists who have overtaken America? If Trump continues to shoot himself in the toes, then we can’t help him.

[3]  See Ali al-Ahmed and Mohamed Dhamen, “From American College Campuses to ISIS Camps: How Hundreds of Saudis Joined ISIS in the US,” Institute for Gulf Affairs, May 30, 2017.