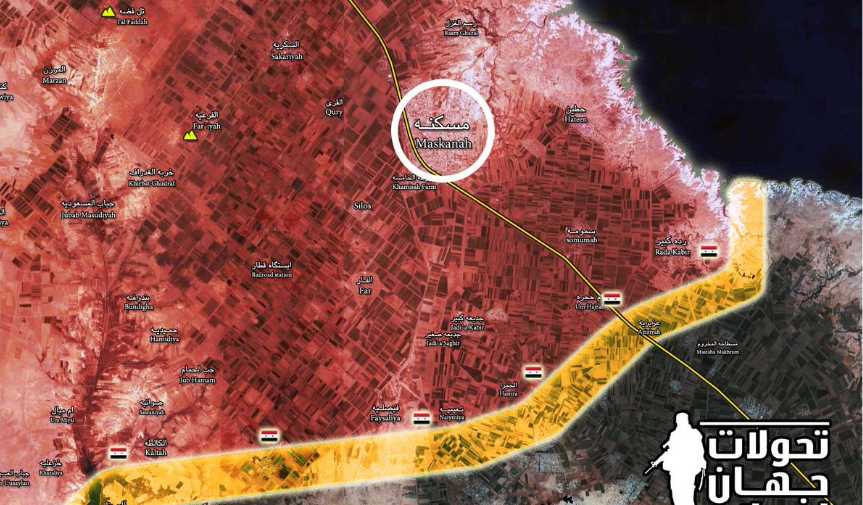 [ Editor’s Note: Well this is a big surprise. We had a report yesterday that there had been earlier withdrawals by ISIS from Maskanah and a fight to the death delaying force left to inflict as much damage on the Tiger forces as possible in their final assault.

It appears now like nobody was there, which begs the question how did they get out with transportation and not get bombed by the highly efficient Russian and Syrian air forces.

Do we have a flip on this situation of their being allowed to escape on the hopes that they would join the defense of Raqqa somehow so the Kurds would have to deal with them?

I posed the question yesterday, where would this retreating ISIS force go with maybe only half full tanks of gas?  And why would they risk getting slaughtered on the roads when they could inflict a lot of carnage on the SSA in a drawn out street fighting battle for Maskanah from well defended positions?

Did ISIS withdraw because the town was bombed into the Stone Age? And why have we not heard a word, even today, about what happened to the civilians there, when ISIS has always used them as human shields. If we learn more today I will be updating.

But despite all the questions that remain, this is a huge victory for the SAA and the Tiger Forces. They have taken this area with modest casualties, really hurt ISIS, and can now keep moving south, liberating more territory as the battle to control as much of the country as possible before the political talks resume … Jim W. Dean ]

The last ISIS stronghold in the province of Aleppo, the town of Maskanah, felt into hands of the Syrian Arab Army (SAA) last night. The liberation of Maskanah is an important victory for the Syrian military.

[ Note: Below is one of the best combat videos of the war, showing us a lot of what the combat conditions were like in this battle for East Aleppo. ]

Now, government forces, led by the SAA Tiger Forces, will be able to reach the province of Raqqah and too expand a buffer zone alongside the strategic Ithriyah-Khanasir-Aleppo road. This also opens additional opportunities for operations against ISIS in the provinces of Homs and Deir Ezzor.