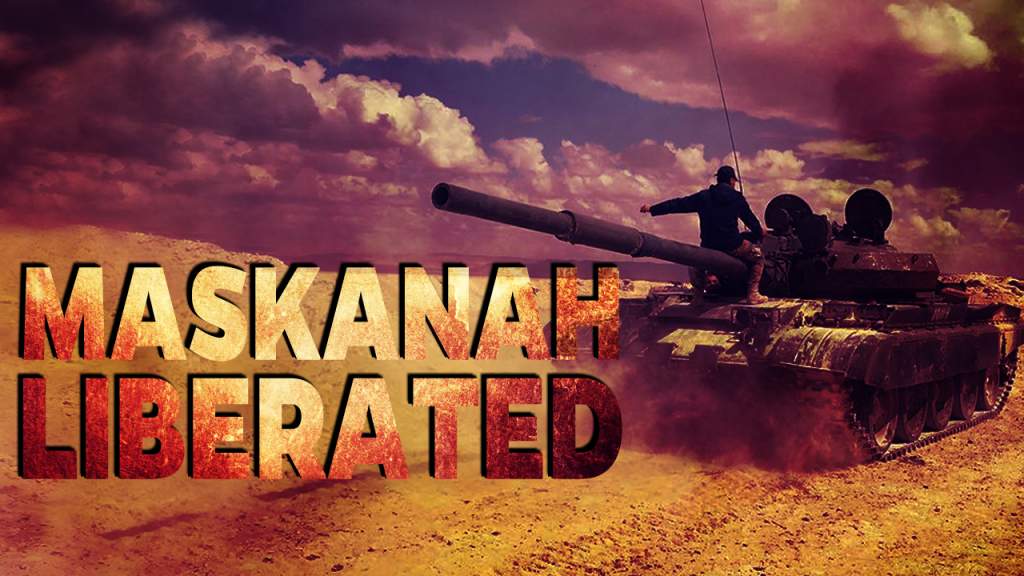 Syrian government forces, led by the Syrian Arab Army (SAA) Tiger Forces, have achieved a major victory in the battle against ISIS in eastern Aleppo. Late on Friday, the Tiger Forces encircled the ISIS stronghold of Maskanah and took control over the N4 highway. On Saturday, army troops liberated Maskanah itself and started removing mines and IEDs set up by terrorists in the area. A majority of ISIS terrorists had withdrew from the town in the direction of Palmyra, according to local sources.

Separately, units of Liwa al-Quds and the Republican Guard advanced east of Khansser and captured the Alam hill and the nearby points.

A contact line between government forces and the US-backed Syrian Democratic Forces will likely be established south of Dibsi Afnan. Then, the SAA may continue developing advance expanding a buffer zone along the Ithriyah-Khanasser-Aleppo road.

The liberation of Maskanah also opens additional opportunities for operations against ISIS in the provinces of Homs and Deir Ezzor.

ISIS responded to this with a large advance against the SAA in the city of Deir Ezzor. ISIS units operating had received additional reinforcements, including artillery pieces and military equipment. This allowed them to capture the Panorama roundabout and the Panorama School in the area of the 137th Base. A fierce fighting is ongoing in Tal Umm Abboud and Tal SyriaTel. If the 137th Base falls into hands of ISIS, this may lead to a collapse of government forces defenses in a large part of Deir Ezzor. The situation is critical.

In turn, ISIS has invested a large number of its resources in this operation and if it fails, this may open a road for the government advance on al-Sukhna on the Palmyra-Deir Ezzor highway.

Deir Ezzor and al-Bukamal are located at a strategic highway linking Raqqa and Mosul. If ISIS wants to keep at least some presence in the Syrian-Iraqi battleground and to get some freedom of operations, it desperately needs to capture the city of Deir Ezzor. This is why many militants redeployed from other fronts, including the ISIS-held area of Iraq and Raqqa are involved in this effort.

Since June 3, it has liberated more than 1400 square kilometers east of Palmyra city. The operation involves large forces of the SAA and its allies armed with dozens of armored vehicles and battle tanks, including modern T-90A battle tanks. The Russian Aerospace Forces and the Syrian Air Force support the operation.

ISIS claimed that 21 Syrian soldiers were killed by a VBIED attack in the Abbasiya area. 14 Syrian soldiers were reportedly killed in a suicide attack in Al-Gharb hills. ISIS destroyed a battle tank of the SAA near Al-Mahaor with an ATGM, and targeted a gathering of soldiers there with an ATGM, allegedly killing five soldiers. The casualties of ISIS forces in the area are unknown.

The US-led coalition has set up a new military base in at the Syrian-Iraqi border. The base is located at Al-Zkuf, 70 km northeast of Al-Tanf and 130 km south of the ISIS-held town of Al-Bukamal. The declared goal is to assist US-backed militant groups, like Jaysh Maghawir al-Thawra, in their battle against ISIS.

Meanwhile, US-backed militants have continued their attacks against government troops in the southeastern desert. However, they have achieved no notable results. The SAA maintains positions in about 40-45 kilometers from Al-Tanf.

The situation is also escalating in the city of Daraa as government forces have deployed reinforcements in order to prevent further militant advances in the provincial capital. The army has launched an intense bombing campaign against Hayat Tahrir al-Sham and its allies in the area. Government forces also conducted few counter-attacks. According to some pro-government sources, the army may launch a military operation in order to liberate the whole city. However, this looks too optimistic, considering the situation in Deir Ezzor and near Palmyra.