Today, a particularly unpleasant dollop of disinformation landed in my inbox, it had issued forth from the black propaganda orifice that is Russia Insider.

We had long ago identified Russia Insider as yet another of the myriad of similar fronts operating within Russia, purporting to be authentic Russian media outlets but in reality, they are owned and operated by foreign intelligence services.

Now it is time to call them out for what they are – foreign assets operating within Russia to the detriment of Russia itself and by extension, the whole world.

Other examples include The Moscow Times, a CIA-run English language newspaper and website. We should also mention once again, our very strong suspicions regarding infiltration of Russia Today and Sputnik by CIA/Israeli assets.

Note that this begging letter from Russia Insider namechecks Drudge, Alex Jones, and Zerohedge, all of which are also disinformation operations, fronts for intelligence agencies.

As for the anti-Clinton nonsense contained in this letter, it barely warrants comment, just file it alongside all the other nonsense such as Pizzagate, Hillary eating babies, Mena drug running and all the other manufactured Fake News about the Clintons.

I’m letting you know about this important investigative article we published today, which we put a lot of resources into:

The Lawsuit That Could Sink the Clintons: A 30-Year Murder Cover-up Is Going to Court

Let me tell you how we stumbled on it.

To bring you cutting edge insight that is ahead of the curve, we spend a lot of time on the fringes of the internet, sniffing around, mostly for Russia stuff – on message boards, forums, obscure websites, and social media.  Not long ago we were doing just that, and we stumbled on this story.

At first we thought it was another anti-Clinton conspiracy nothing-burger, but there was something about the humanity of the mom crusading against a corrupt government that tugged on our heartstrings, so we took a closer look.

And we realized this was potentially very important.

The timing couldn’t be worse for Clinton, with the Seth Rich affair setting a certain backdrop and raising questions.  In contrast to the Rich story, this one has a mountain of facts, evidence, and what appears to clearly be criminal behavior, multiple government agency cover-ups, and shady dealings from the Clintons, and an ongoing trial.

Worse for the Clintons, Netflix released the 5th season of House of Cards a week ago.  Its scheming, murderous and hopelessly cynical husband and wife team clawing their way to power has grabbed the American imagination.

The twists and turns of the story we dug up read like a subplot in the series.

This article has nothing to do with Russia, but every now and then we pursue a story like this if we think it is interesting and not getting enough coverage.

Digging into the foibles of the Clintons is a favorite.  Some of our most influential articles have been about this:

Best Available Evidence: Hillary Clinton Has Parkinson’s,  – September 2016 – 30,000 views, followed up with our exclusive interview with the MD who had been digging into the obvious clues that something is seriously wrong with Hillary’s health.

We were ahead of the pack on both topics – how Clinton stole the nomination from Bernie, especially the election fraud angle, and Hillary’s health.  Our work was picked up by Drudge, Alex Jones, and Zerohedge.  An Alex Jones video using video we created about Hillary’s health got 160,000 views on Youtube, was reproduced widely and went viral, going into the millions of views.  The video on our channel got 50,000 views.

It is our hard work, and hundreds of alternative media outlets like us, that kept Hillary out of the White House – so I guess, in a sense, she is right – The Russian DID do it!  The Russia Insiders, that is.

All this excellent journalism is made possible by your donations, so if you think what we do is worthwhile and important, please make a donation today.

The more you give, the faster we can take down our lying, fake-news media.

Thank you for your support! 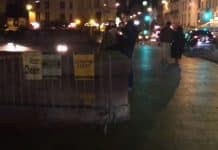