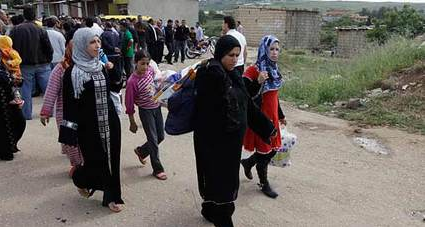 The number of the Syrian refugees from the territories controlled by the Islamic State has increased at the checkpoints located to the north-eastern part of the Aleppo province.

In particular, a group of men of up to 40 people engaged the attention among the refugee stream at the checkpoint near Al Taiarah village, approximately 50 km to the north-east from Aleppo. Most of them answered the questions only in monosyllables. The men claimed they had never had a gun in their hand, but had dug trenches or loaded ammunition under the threat of being shot. “Jihadists forced us to cooperate with them, and in case of disobedience they threatened to cut out the whole family, they whipped to death those who refused to help them,” one refugee states.

The representative of the Baath party in Aleppo, Yusef Rana, says that the increase in the number of refugees is primarily due to the extension of the amnesty-law signed by B. Assad up to the end of June. “Many of people decided to take this opportunity and start a new life,” Y. Rana told. He noted that one of the main aims of the local authorities is to make sure that as many people as possible could rectify, correct or improve their previous way of life.

A refugee-woman saved herself from ISIS

In the regional office of the Baath party were noted that the people incoming are registered and sent by the buses to the collection point. Men and women then are checked for several days, and if there is no evidence of their participation in the murders of servicemen and civilians, they are amnestied by a court decision.

To be mentioned is that B. Assad issued a decree on the amnesty of militants involved in military operations against government troops last July. The decision was prolonged several times. The decree is an effective way to avoid the fate of being killed or convicted for helping militants. Refugees, therefore, have a real chance to end the war and begin a peaceful life.