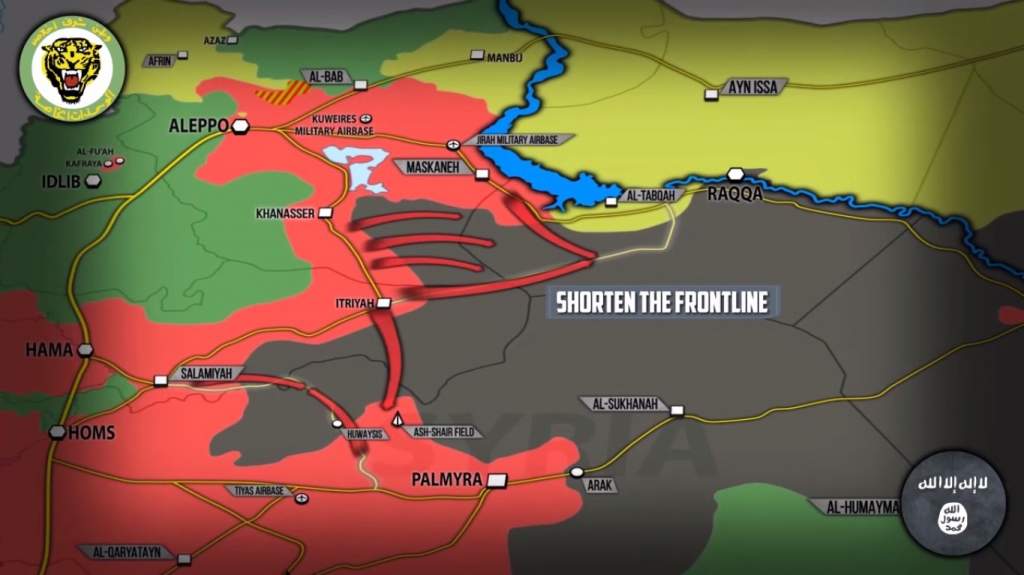 ISIS terrorists have lost large chunks of territories to Syrian government forces in the provinces of Raqqa and Homs.

In the province of Raqqa, the Syrian Army’s Tiger Forces reached the area controlled by the US-backed Syrian Democratic Forces (SDF) west of Tabqa after liberating about two dozens of villages, including Rumthan, Bir Mulayhan, Shatnah, al-Qusur, al-Muhaddad, Jubb al-Khafi and Husayn al-Mikhallaf, south of Maskanah.

The government forces made this advance after a full withdrawal of ISIS members from the area. Now, the Tiger Forces are able to develop momentum in the direction of the Ithriyah-Tabqa road, further clearing areas east of Khanasir. This will allow to shorten the frontline and to set a foothold for the operation against ISIS at the Salamiyah-Palmyra road.

The army expansion in the Raqqa province may also push the SDF to encircle the ISIS-held provincial capital from the southern direction, preventing ISIS from fleeing the besieged city.

In the province of Homs, the army liberated the al Abbasiyah area, the Hamamt Zenobia area and the Olayanieh village south of Palmyra. The army advance was massively supported by airstrikes from the Russian and Syrian air forces.

In the Damascus desert, government forces took control over the Dawka area, creating conditions for an advance on Bir Qassab and al-Safa controlled by US-backed militants.

On Thursday, the US-led coalition once again bombed the army and its allies near the area of at-Tanf. The airstrikes destroyed technical vehicles in the Khibrat al-Shami area at the Damascus – Baghdad highway, 40 km away from the US garrison.

According to the statement, coalition warplanes also downed a medium-sized unmanned aerial vehicle that had targeted area near the US-led forces positions. The drone appears to be an Iranian-made Shahhed-129.

Meanwhile, the SDF captured the 17th Division base north of Raqqa and continued developing momentum in the city. According to the US-led coalition, there are about 2,500 ISIS members inside the city.