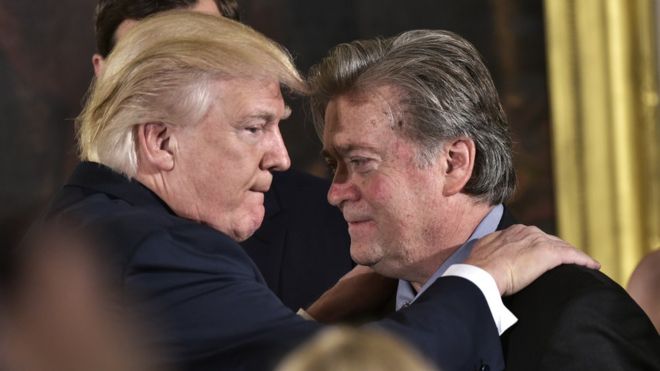 Now that Trump has abdicated his leadership of the free world ~ by scuttling the Paris climate accords ~ we may well be witnessing the next self- destructive step in the Bannon/Trump long range agenda which Bannon once described as “We want to bring everything crashing down and destroy all of today’s establishment”  which is now one step closer including the Trump administration ~ as Global warming and the search for truth march on. The Cloud over the White House has now become a full fledge thunder storm if not a hurricane named Mueller: Allen L Roland, PhD

“Antonio Gramsci wrote his “Prison Notebooks” at a time not dissimilar to our own. The political parties led by the liberal class, because they had detached themselves from the working class, were weak or irrelevant. The radical left had been neutered and had failed to articulate a coherent alternative vision to capitalism. There was a “crisis of authority.” Fascism was ascendant and a state repression was becoming steadily more severe and totalitarian”  Chris Hedges

A decision to leave the Paris agreement doesn’t fundamentally change any of the Paris Accord but Trump wasn’t planning to aggressively tackle global warming before, and he still won’t ~ for Trump has not only damaged his world leadership role but has gone rogue and isolated himself in the process as he continues to self-destruct.

But Frank Rich, the New Yorker, hits the nail on its head;

“I was elected to represent the citizens of Pittsburgh, not Paris,” Trump declared when he marked his reckless decision with a bizarre Rose Garden celebration (complete with a military band playing jazz).

It’s not certain that he even understood that the pact was no more a Parisian invention than Freedom Fries. But facts were always beside the point in making this move: his only goal was to pander to a political base that buys Steve Bannon’s brand of America First populism. In the process Trump alienated virtually the entire world, all of America’s key allies included; the majority of Americans who (polls show) support the Paris accord; corporate leaders from nearly every sector of American business (from Google to Goldman Sachs to GE); and the governmental and civic leaders of every state and municipality eager to protect the citizenry from climate change and/or to cash in on the expanding green economy.  What could possibly go wrong?

Not to minimize Trump’s threat to the planet but leadership outside of Washington is now finally energized to fill the vacuum he’s left behind, and the elections of 2018 and 2020 are likely to further hinder this administration’s assault on environmental regulation.

Meanwhile, the Trump base is once again being played for the patsies they are.  As Richard Painter, the former chief ethics lawyer in the George W. Bush White House, tweeted last night: “This White House is creating more jobs for criminal defense lawyers in Washington than it will ever create for steelworkers in Pittsburgh.”

Regarding Donald Trump, we are all watching a known falsifier of facts and deeply insecure President being slowly dissembled by the truth ~ in real time and in true citizen Kane fashion much as Richard Nixon was in the early 1970’s.

In that regard, Mark Z Barabak, LA Times, interviews John Dean on June 1st ~ regarding the current Trump cover up in the in comparison to the Nixon administration;

“John Dean is a connoisseur of cover-ups, a savant of scandal, so he can more than imagine what it’s like inside the Trump White House right now.

“It’s a nightmare,” he said, presiding in a high-backed leather wing chair off the lobby of the Beverly Hills Hotel. “Not just for those in the headlines ~ political strategist Stephen K. Bannon, jack-of-many-duties Jared Kushner ~ but for their unsung assistants and secretaries as well.”

Dean was careful to say he has no inside information on the Trump administration, no Deep Throat, the famous Watergate leaker, funneling him tales of intrigue from 1600 Pennsylvania Ave. But, he said, he knows the odor of malfeasance, even from 3,000 miles away.

“I’ve been inside a cover-up. I know why we could make certain things go away and other things not go away. And that’s because some things, you just couldn’t make them disappear,” he said. He might have been roughing out a verbal draft of “Scandal Containment for Dummies.”   See LA Times article ~

Here are some facts about the Paris climate accords ~

4.This isn’t really about climate policy. It’s all about asserting Trump power !

Leaving the Paris accords, however, would give Trump a big symbolic victory, burnishing his credentials as America’s true defender against the out-of-touch concerns of the global elite ~ but it was in reality an empty symbolic victory.

TAKE A CLOSER NOTE AT MENTAL STABILITY OF PRESIDENT TRUMP

We are now also witnessing the sad spectacle of our President exhibiting many of the classic traits of NPD (Narcissistic Personality Disorder) whereas his need for excessive admiration as well as his inability to accept criticism and deal with failure are cause for genuine global concern.

It appears that Donald Trump’s late night tweets are taking its toll on his mental balance as the Moeller Probe closes in on the Trump administration ~ for example Trump’s recent early morning Tweet ~ COVFETTE ~ could well be his subliminal awareness of his cover up in his tired late night state. (See keyboard and note how close E and F as well as R ~ where he perhaps tried to write Cover up / Fed up, before he succumbed to sleep.

Experts have been writing letters making this claim to a number of publications. One letter was published by the Huffington Post claiming that Trump’s grandiosity and impulsivity suggests that he may have a mental illness, while another psychologist who wrote to U.S. News and World Report said Trump may have malignant narcissism.

And a letter to the New York Times that was signed by several psychologists says that “the grave emotional instability indicated by Mr. Trump’s speech and actions makes him incapable of serving safely as president.”

“We are writing to express our grave concern regarding the mental stability of our President-Elect,” reads the letter submitted to then-President Obama by three psychologists and published in the Huffington Post.

“Professional standards do not permit us to venture a diagnosis for a public figure whom we have not evaluated personally. Nevertheless, his widely reported symptoms of mental instability ~ including grandiosity, impulsivity, hypersensitivity to slights or criticism, and an apparent inability to distinguish between fantasy and reality ~ lead us to question his fitness for the immense responsibilities of the office. We strongly recommend that, in preparation for assuming these responsibilities, he receive a full medical and neuropsychiatric evaluation by an impartial team of investigators.”   See APA criteria ~

“I’m a Leninist,” Bannon once told the Daily Beast. “Lenin wanted to destroy the state, and that’s my goal, too. I want to bring everything crashing down and destroy all of today’s establishment.”

Whether speaking to supporters of former Alaska Gov. Sarah Palin or to listeners on his former radio show, Bannon has long employed the revolutionary language of a political insurgent.

And like political insurgents through history, including Lenin, Bannon and other like-minded ideologues in the Trump White House view disruption and polarization as means of pressing ahead with their agenda and rallying their core supporters.

But Bannon’s radical approach carries big risks and amounts to a high-stakes gamble that Trump can deliver sufficiently on his ambitious promises to satisfy both his loyal supporters and those ready to roll the dice who voted him into office.

The result has been chaotic and often disorganized, prompting satiric television sketches and accusations from veteran Washington hands that the administration is amateurish and inept Trump’s approval ratings fall by the day.

But what by conventional measures looks like a string of setbacks and misfires could to an ideologue like Bannon be proof that the administration is on the right track to achieving its goal ~ destroying what he calls the Washington “establishment.”

What’s less clear is what might take its place.

It will not be a stretch to witness a false flag event or war to utilize the media to reinforce more lies, similar to Iraq ~ which will then cost even more unnecessary lives. See Amy Goodman video ~ YouTube Video ~ 3 minutes ~