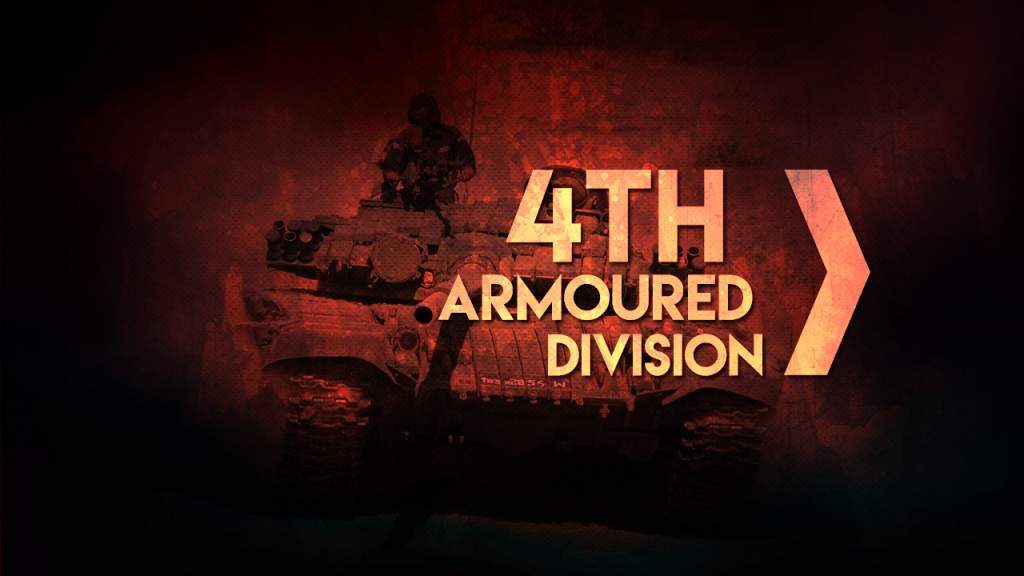 The division mainly dependents on volunteers from Homs and the Syrian coast in addition to conscripts spanning all Syrian provinces. Almost all of the 4th Armored Division’s troops are career soldiers in contrast to the conscripts who comprise a majority of other SAA units. Since its inception, the 4th Armoured Division had had superior financial and material support compared to the rest of the Syrian Arab Army (SAA) as well as gaining access to some of the most advanced weapons. The division served first and foremost as the government protection force, and was oriented against both internal and external threats.

The 4th Armoured Division consists now of three armored brigades (40th, 41st, 42nd armoured brigades), one mechanized brigade (138th mechanized brigade) and an artillery regiment (154th artillery regiment). The organizational and staff structure of the SAA provides that the tank brigade should have 2,500 men, 105 tanks and 31 infantry fighting vehicles. Mechanized brigade should consist of 3,500 people, 105 infantry fighting vehicles, 31 tanks. Proceeding from the fact that the structure of the SAA is similar to the structure of the USSR Armed Forces, one can assume the following structure of the artillery regiment, armed with self-propelled howitzers 2S1. The battalion of 2S1 howitzers of the Soviet Army of the 1970s-1980s consisted of 228 men and 18 self-propelled guns. Three battalions constitute the regiment. Consequently, the order of the artillery regiment should be about 800 people and 54 SPG. However, one should keep in mind that it is not known how many battalions are armed with SPG, and how many with MLRS. During the conflict, an additional Special Forces regiment (555th Special Forces regiment) was attached to the division, making it larger than conventional armoured divisions. It is, for the most part, based in small groups north and west of Damascus, likely for security reasons. In this system, the regiment of special operations forces should be 1500 people. Thus, the 4th Armored Division must number at least 13,000 men, 350 tanks, 200 infantry fighting vehicles, 54 self-propelled guns, not including air defense units, engineer troops, signal corps units, intelligence and logistics units. This number is more or less constant, given the importance of the tasks assigned to the division in the course of the Syrian armed conflict.

The 4th Armoured Division is mainly armed with T-72AV, T-72M1, and T-55MV battle tanks with reactive armor and the ability to launch guided missiles. The force is also equipped with the T-72 Sniper, an advanced Italian version with the TURMS-T Fire Control System which is considered the most modern in the Syrian land force. The above complexes of weapons and protection make this tank the most advanced in the SAA and allow it to successfully carry out the assigned tasks.

The 4th Armoured Division also has a large variety of artillery systems along with some 2S1 Gvozdika self-propelled howitzers. Positive qualities of this self-propelled artillery system include high maneuverability and a relatively small mass. In contrast to the self-propelled howitzers of NATO countries, the 2S1 has a direct aiming sight, and the ammunition includes cumulative ammunition to fight with enemy armored vehicles. The shortcomings of this artillery system include weak armor booking, which allows the crew to be protected only from light weapons and shell fragments, as well as separately loaded shells that limit the rate of fire of the gun.

The 4th Armored Division also uses the Soviet UR-77 mine-clearing machine to destroy the terrorist’s positions. The charge of this machine weighing 600-700 kg throws at a range of 250-500 meters. In addition to demining or destroying well-fortified positions, the use of UR-77 produces a strong psychological effect: the roar and flame of rocket engines, the sea of fire, the roar of a powerful explosion does not leave the slightest chance for armed terrorists.

The 4th Armoured Division has performed as an indispensable elite unit supporting the Bashar Assad government since the start of the ongoing Syrian crisis. It was the 4th Armoured Division that entered Dara’a in 2011 as well as the towns of Rastan an Talbiseh in Homs to restore order. The main unit that decided the outcome of the situation was the 42nd armoured brigade. 154th artillery regiment and 555th Special Forces regiment took part in the siege of Homs. This siege lasted three years from May 2011 to May 2014, and resulted in an opposition withdrawal from the city. As the events developed and the crisis escalated to all-out warfare, the division began fighting its first battles and suffering its first losses. It was ordered to re-enter Dara’a in the beginning of 2012; however, this time it faced fierce resistance and suffered heavy losses.

Nevertheless, it succeeded in recapturing large parts of Dara’a and its countryside as well as recapturing Hama with the support of other formations of the Syrian Special Forces. In that operation, there were almost no or very low civilian or military losses. A reconciliation treaty was forced onto the city, and all weapons were confiscated.

The next mission was in Idlib where the division (and especially 555th special forces regiment) was able to recapture the city in the span of a week with virtually no civilian or infrastructure damage. However, it failed to restore order to the city’s countryside even when supported by other armored formations. The 4th Armoured Division suffered massive losses as it attempted to recapture Idlib’s eastern countryside. The Battle for Idlib in 2012 was the last major deployment of the 4th Armoured Division outside of Damascus since the militants launched the major assault on the capital in 2012 that was repelled by the Republican Guard.The need for a powerful force in the western fringes of the Syrian capital proved significant. The division began expanding its operations in western Damascus as well as regions north of the capital so as to isolate rebel gatherings and strongholds from each other like what happened in Wadi Barada, Jimraya, al-Tal, and Western Ghouta. Sieges were laid for years to paralyze the jihadist expansion near the capital. One of the 4th Armoured Division’s most significant achievements was its siege of Darayya, a city west of Damascus and south of the Mazzeh Airbase as well as encircling Moadamiyah and separating it from Darayya. Between 2013 and 2014, the battle-hardened division managed to secure the surroundings of Sayedda Zainab Shrine with the support of the the Brigade of Abu al-Fadl al-Abbas south of Damascus advancing onto Babbila and Yalda and forcing them to the reconciliation table. This development allowed the Syrian Armed Forces to strengthen the siege on the remnants of Al-Qaeda and ISIS in the Yarmouk and Tadamon districts. With the beginning of the Russian intervention in 2015, the 4th Armoured Division began the process of emptying the pockets it had successfully isolated since 2012.

Due to the special training and maintenance of the Ghaith Forces, they were able to capture Moadamiyah, Khan Al-Sheh, Wadi Barada, and Darayya.

The jihadist rebels of Jabhat Fateh Al-Sham (formerly Al-Nusra Front) surrendered Khan Al-Sheih to the Syrian Arab Army after more than four years of battle in this key West Ghouta town near the Syrian capital. With over 3,700 soldiers from the 4th and 7th Armored divisions surrounding Khan Al-Sheih for months, the Syrian Arab Army has received a major boost in terms of manpower to the strategic Golan Heights front in the Al-Quneitra Governorate. Then the 4th Armoured Division’s 42nd Brigade was free to be redeployed. The Golan Heights front became the new battle-zone in southern Syria, as the government aimed to isolate the jihadist rebels near the Israeli border.

The Syrian Arab Army’s 42nd Brigade of the 4th Armoured Division has been redeployed to the Wadi Barada area of rural Damascus after a short stint in the Golan Heights. The 42nd Brigade has been involved in several important battles in the past, including the capture of Yabroud in the Qalamoun Mountains, Darayya, and Khan Al-Sheih. Unlike the other Syrian Arab Army units involved in this offensive at Wadi Barada, the 42nd Brigade was under the direct command of General Maher Al-Assad and his appointed officers. With their impressive track record in battle and technologically advanced weaponry, the 42nd Brigade lead the charge to expel the remaining jihadist rebels from the Wadi Barada area. The Wadi Barada offensive ended January 28, 2017 through a decisive Syrian Army victory.

The 4th Armoured Division and 105th Brigade of the Republican Guard proved too much for rebel forces in Al-Qaboun to handle, forcing them to settle for a truce and swift departure to Idlib province following a nearly three-month long battle.

The followed liberation of Barzeh area was another success that had become possible thanks to the division’s victory in Qaboun.

The Syrian Arab Army’s 42nd Brigade of the 4th Armoured Division was redeploying from the Al-Qaboun District to the Beit Jinn pocket near the Golan Heights border. The 42nd Brigade has begun to transport their soldiers from the Al-Qaboun and Tishreen districts to Beit Jinn. No official date has been set for this Beit Jinn offensive. The capture of Beit Jinn is very important to the Syrian Army’s High Command because it is the last town under the control of Hay’at Tahrir Al-Sham in west Damascus.

Today, the 4th Armoured Division is considered one of the most experienced divisions in urban warfare among its counterpart divisions in the SAA and takes a large share of credit in the improvement of the security status in Damascus and its countryside. It is also one of the few divisions that did not suffer from the large waves of defections that took place in 2011 and 2012.

Syria’s government can have no doubt regarding the professionalism and loyalty of this division. No matter to which part of the front its units are sent, the 4th Armoured Division brilliantly accomplishes their task.