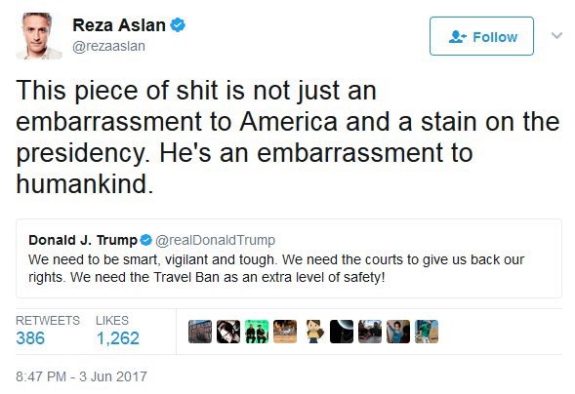 The Fecal Pride Alliance (FPA) has issued a statement condemning Reza Aslan for calling Trump “a piece of sh*t.”  The FPA claims Aslan’s tweet “is deeply offensive, as it helps perpetuate negative stereotypes about feces.”

The FPA, which receives taxpayer subsidies and regularly conducts diversity training exercises in the public restrooms of American colleges and universities, argues that pervasive negative images and rhetoric associated with human excrement can have a harmful effect on the self-esteem of those who identify as turds, feces, or poop (TFP).

“Comparing sh*t to Donald Trump is deeply demeaning, utterly offensive, and completely indefensible,” argued Jack Schitt, FPA co-director. “Feces don’t lie. They don’t have narcissistic personality disorder. Feces are just normal people like you and me, except that they’re turds.”

Reza Aslan responded that he “should have used better language to express my shock and frustration at the president’s lack of decorum and sympathy. I offer, from the deepest bowels of my being, my sincere apologies to the TFP community for the pain my thoughtless tweet may have caused. As for Donald Trump, he can kiss my Muslim ass.”