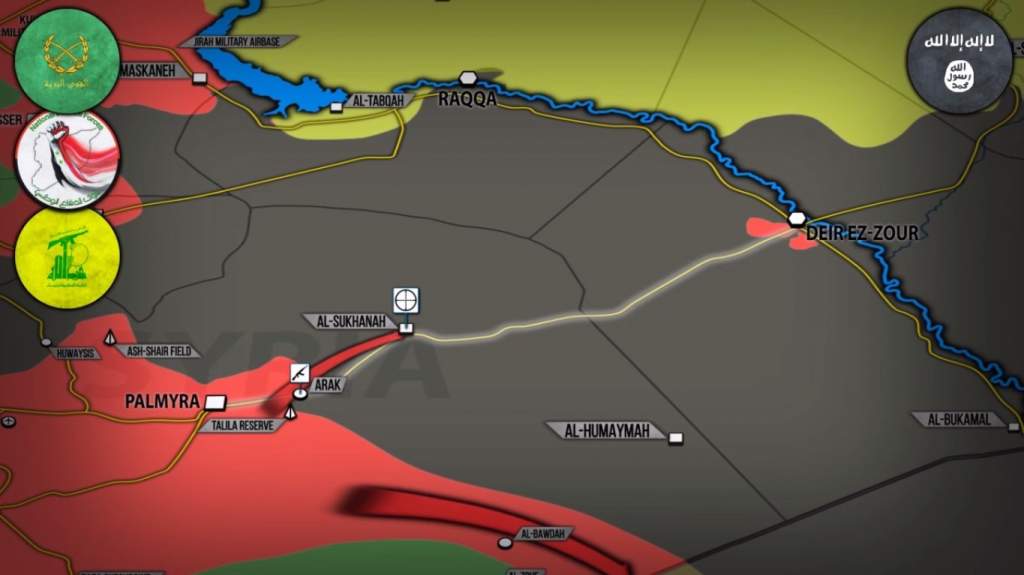 On June 9, the Syrian Arab Army (SAA) and its allied militia groups reached the border with Iraq in the area north of the US-led coalition garrisons at the village of At Tanf and Al Zquf. This advance dramatically changed the strategic situation in southeastern Syria and de-facto allowed the Syrian-Iranian-Russian alliance to win the race for the border with Iraq.

The key goal of the US-led coalition actions near the border was to prevent the SAA from linking up with the allied Popular Mobilization Units (PMU) operating in Iraq and to build a buffer zone controlled by Western-backed militant groups between the two countries.

The PMU is a major power in Iraq and an official part of the Iraqi Armed Forces. It’s currently conducting a large-scale operating against ISIS terrorists at own side of the border. The June 9 advance destroyed the US-led coalition’s plans.

The government forces deployed north of At Tanf also prevent US-backed proxies from advancing on the ISIS-held border town of al-Bukamal. While the US-led forces in southeastern Syria have never had enough manpower and capabilities to do this, the declared aim to retake al-Bukamal from ISIS was an important part of the US propaganda campaign to justify its illegal presence in the area.

Now, government forces in southeastern Syrian forces will likely coordinate its efforts with the PMU in order to clear the Syrian-Iraqi border area and to move to al-Bukamal and Qaim. Iran will also be able to incease supplies to the Syrian government via a land route. Some PMU member groups are already participating in the operations in Syria on the side of the SAA. Now, this number will likely be increased.

Meanwhile, Jordanian border guards clashed with a convoy consisting 9 cars and 2 motorcycles trying to enter Jordanian territory from the direction of At Tanf. The border guards destroyed 2 cars and 2 motorcycles. The rest of the vehicles retreated. At Tanf town is under a full control of the US-led Coalition and militant groups affiliated with the US-backed Free Syrian Army (FSA).

The people who attempted to infiltrate into Jordanian territory may be a group of FSA who decided to withdraw to Jordan for an unknown reason. It is almost impossible for anyone to move in Al Tanaf without the US-led coalition approval. However, it is also possible that these people were local smugglers.

Following a success at the border with Iraq, the SAA and its allies intensified operations against ISIS in the countryside of Palmyra, retook some points east of the city and attacked ISIS in the Arak area. The mid-term goal of the government operation is to capture the strategic Sukhna town located on the road to Deir Ezzor. The SAA, Hezbollah and other groups had sent reinforcements to the area in order to speed up the operation.

According to reports, ISIS had deployed a large force for another attempt to retake Deir Ezzor from the SAA. The government forces push to Sukhna may be a response to this situation.

The Syrian Democratic Forces (SDF), backed up by the US-led coalition’s airpower and artillery units, are storming the ISIS-held city of Raqqah. A fierce fighting is ongoing in the 17th Division Base, Husaywah and the industrial district near Mashlab.