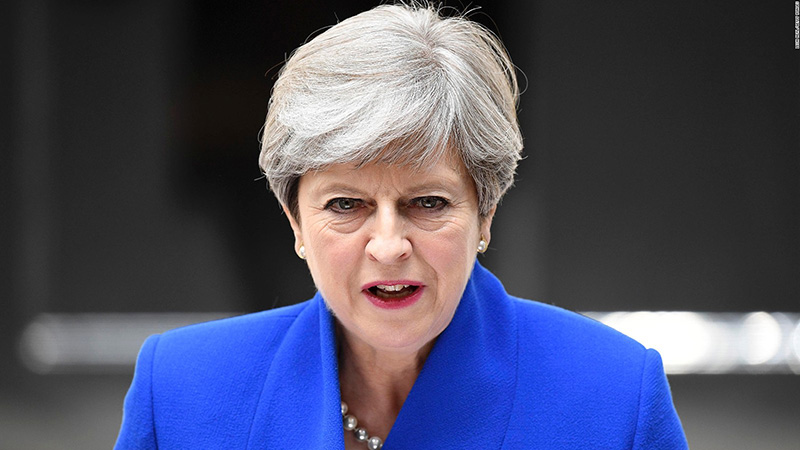 Former Conservative Chancellor George Osborne, now editor of the London Evening Standard, calls Theresa May “dead woman walking”. Another former minister Anna Soubry says: “She is in a desperate position. It is untenable….”, while according to former Education Secretary Nicky Morgan she cannot lead us into another election and a leadership challenge is possible during the summer.

While stunned Conservatives try to recover their composure, the rest of us can amuse ourselves speculating on whether it’ll be messed-up May or her nemesis the charismatic lefty Jeremy Corbyn who’ll be leading the UK to the sunny uplands of post-Brexit opportunity in three months’ time.

For now, though, May seems to have soothed her furious Conservative backbenchers enough to gain breathing space. She told those who survived her reckless general election performance: “I got us into this mess, and I’m going to get us out.”

With the help of some new-found but very dodgy friends.

A deal apparently struck between May and the DUP (Democratic Unionist Party in Northern Ireland) has stoked widespread anger. With their 10 seats they might prop her up for the timebeing. But this will not be a formal coalition like the one agreed between David Cameron and the Liberal Democrats after the 2010 election. Instead, May has in mind a ‘confidence and supply’ arrangement in which the DUP guarantees to protect her from a ‘no confidence’ vote and to back her budget, but anything else will have to be thrashed out on a case by case basis.

What we’re not told is the DUP’s price for coming to her rescue. When you consider that the DUP are a deeply unpleasant gang of Protestant fundamentalists supported by the bothersome Orange Order and with links to paramilitary groups, you can be sure that this is a pact with the Devil. Their views on climate change and LGBT are unpalatable and they vehemently oppose abortion (in Northern Ireland it is still an offence for women to procure a termination, the penalty being life imprisonment). They also don’t want the sort of ‘hard’ border with the Irish Republic that a ‘hard’ Brexit would bring.

As if that wasn’t bad news enough, they oppose power-sharing with Irish Nationalists. May’s willingness to romp with them is therefore seen as a breach of the Good Friday accord which requires the UK government to show rigorous impartiality towards the different political factions in Northern Ireland. Favours to the DUP would be viewed as a grave threat to the hard-won peace.

So May’s selfish ambition could have fatal consequences. In any case, could a flimsy ‘confidence and supply’ deal ever provide the stability and certainty the UK needs for its Brexit negotiations and re-emergence into the wider world?

We saw earlier her poor judgement when as Home Secretary she presided over soaring immigration and cuts to police and other agencies which undermined national security. We can now add her lack of common sense in anything to do with foreign affairs.

The media endlessly pumps pout images of May and her husband entering and leaving their local church. She’s the daughter of an Anglican priest after all. But do her high principles extend to concern for her Christian brothers and sisters in the Holy Land abused and oppressed for decades by the illegal Israeli occupation? Hell no, she praises Israel for being “a thriving democracy, a beacon of tolerance” when it clearly is neither. Then there’s her truly offensive belief that we share “common values” with Israel which was recently branded an apartheid state by the UN.

And who hurriedly declared the Shai Masot affair “closed” after Masot, employed by the Israeli embassy and probably a Mossad asset, plotted with gullible British MPs and political hangers-on to “take down” senior government figures?

She even attacked the successful BDS [boycott, divestment and sanctions] campaign calling it unacceptable and warning that her government would “have no truck with those who subscribe to it”.  200 legal scholars and practising lawyers from 15 European countries promptly put her in her place by pointing out that BDS is a lawful exercise of freedom of expression and outlawing it undermines a basic human right protected by international convention. Furthermore BDS is civil society’s response to the international community’s irresponsible failure to act. Her efforts to repress it amounted to support for Israel’s violations of international law and a failure to honour the solemn pledge by states to ‘strictly respect the aims and principles of the Charter of the United Nations’.

In a speech to Conservative Friends of Israel she said the British government will be marking the centenary of the Balfour Declaration later this year “with pride”. The Declaration was the infamous letter by the British foreign secretary to Lord Rothschild in 1917 that betrayed the Arabs and started a running sore in the Middle East lasting a hundred years. Britain’s failure to make amends continues to endanger the whole region and cause grief for millions. By coincidence this year also marks 50 years of brutal Israeli occupation of Palestine. To add insult to injury May has invited Israel’s chief criminal Netanyahu to join her government in whooping it up at the Balfour celebrations.

Eager to fuel old hostilities, Theresa May accuses Iran of working with Hezbollah, interfering in Iraq, sending fighters to Syria to help Assad, and supporting the Houthis in the conflict in Yemen. At the same time Britain expects to meddle in the Middle East anytime it pleases and with whoever it wants. And despite growing opposition at home the British government recently concluded another huge arms deal with the Saudis which, according to Mrs May, is for the sake of long-term security in the Gulf. She argues that the same extremists who plot terror in the Gulf states are also targeting the streets of Europe: “Gulf security is our security.”

And who can forget how she left the British public cringing in embarrassment after inviting Trump on a state visit to the UK when he’d been in office only five minutes and clearly ought to have been on probation? Let’s not even mention the photo of the pair holding hands.

So what price should we pay – if any – to the DUP for keeping Theresa May in her job?

As for Brexit, am I alone in wondering why we need to get bogged down for two years negotiating our freedom? What is wrong with stating our terms (which should be as near as dammit the same as existing arrangements and safeguards, minus the free movement of people) to Europe’s principal industrial, commercial, financial, research and security interests, and leaving them to argue with their bureaucrats? I doubt if VW, Audi, Mercedes, Bosch, Renault, Fiat, AEG, Peugeot-Citroen and so on wish to say goodbye to lucrative business or see the UK importing all it needs from the Far East and America.