Obligatory disclaimer: I am not calling this tragic event a false flag.

But one of my best sources, who has been right before, has raised concerns that deserve to be passed on. He writes:

#4 : Connection to prior false flags :
A. A “coating” was sprayed on the wall and inside stairwells during recent renovation. (Some kind of fire accelerant? This inferno blazed with unnatural ferocity and it appears to be the stairwells that were engulfed in flame so as to spell out the numeral 11. -ed.)
B. Ideation of “collapse of steel building by fire because the structure is weakened” is put forward by Pressitute. (Steel framed high rises do NOT collapse from fire. Never have, never will. 9/11 featured three controlled demolitions, not “collapses.” And last January’s 1/19 (9/11 in reverse) Plasco building “fire and collapse” in Tehran was also a deceptive demolition, not a fire-induced collapse, as shown by evidence cited by Architects and Engineers for 9/11 Truth in their special report. The Plasco fire/demolition was presumably orchestrated by the same forces behind 9/11, in an attempt to create the impression that high-rises can collapse from fire. -ed.)
#5 : “Eyewitness” making “expert” statements :
“….Tim Downie, another eyewitness, told the BBC part of the building was “completely burned away”. “It has burned through to its very CORE,” he said. “It looks very bad, very very bad. I’ve never seen anything like this. It’s just such a big fire.” “The whole building is just crumbling. It’s just billowing black smoke.”….”.
Shades of the 9/11 crisis actor “Harley Guy.”
Note that a resident said “there was no fire alarm at all.” This is one heck of a big fire to be a zero-alarm blaze.
Redditors claim that news of the fire was “accidentally” released 23 hours early. Personally I suspect a Google error, but for what it’s worth: 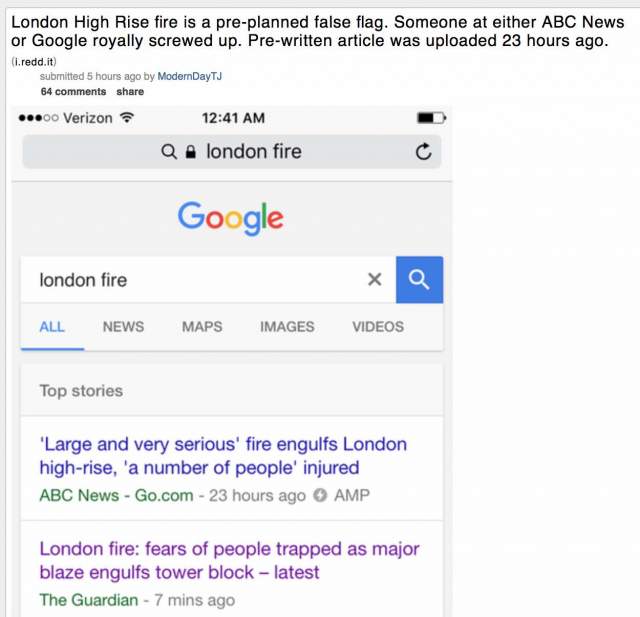 The MSM’s repeated references to “possible collapse” are odd, given the fact that steel-frame high-rises never collapse from fire. (If relatively minor office fires like those of 9/11 could cause highrises to collapse, no firefighters would ever dream of entering a building that has been totally engulfed in a blazing inferno!)

Just as people in the burning Twin Towers on 9/11 were told by a PA announcement to “remain where you are, do not attempt to leave,” residents of the London high rise were instructed ahead of time to “‘stay put’ during a fire.” 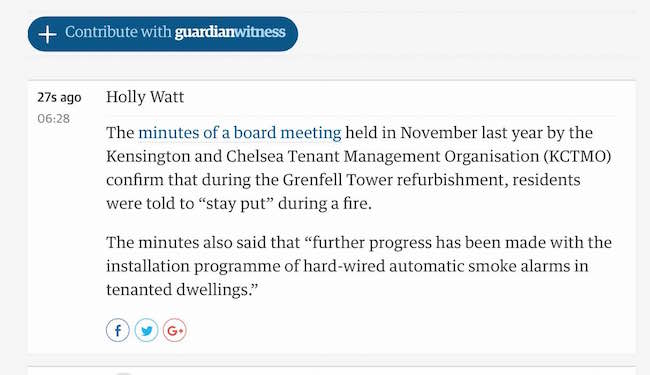