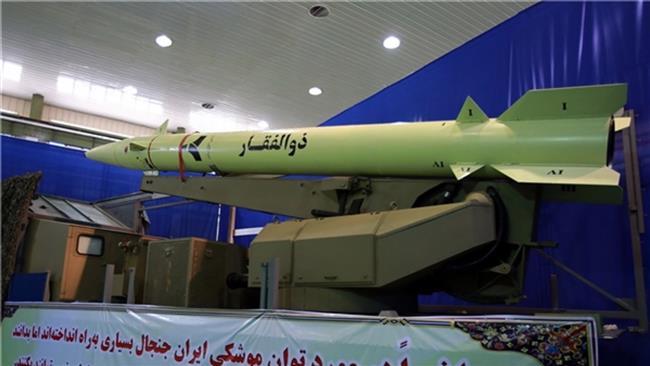 “Our enemies must know that Tehran is not London and Paris. This was a small job and if they put another foot wrong, more deadly blows will come down on their heads,” Hajizadeh said.

[ Editor’s Note: This “six-pack” strike of medium range missiles by Iran on ISIS targets in Deir-Ezzor was a surprise, and then not, for two reasons. Looking backwards, it shows that Iran has demonstrated great restraint not to use these before. And doing so, after the major terror attack it recently had, gave them the perfect opportunity to demonstrate the accuracy of their medium range missiles.

Left out of the story is that Iran can produce these at a fraction of similar Western missiles, where defense contracts make sure the price of everything they produce is sky high – a form of corporate welfare which has a long history.

The US has a special version of this, always including technology that is not yet perfected into new weapons systems to insure cost overruns, with the latest example being the endless fixes for the F-35. Another way costs are run up is to spread parts subcontractors all over the country, which makes all of those Congressional districts love cost overruns.

Iran also got some live-fire testing, using a variety of missiles from their arsenal. As has happened with the Russian weapons systems during real combat use, glitches and quirks are discovered which can be fixed and improved. I suspect the Iranians are borrowing on the Russian design of modular construction of its weapons systems, where parts can be upgraded by swapping them out without a whole new weapons system design, something the Western defense industry prefers for the higher cost.

I suspect we will see more missile firings coming out of Iran, and maybe even getting the US Congress to wake up and abide by the Iran nuclear agreement, and not re-interpreting it to suit their wishes. This has made any agreement that the US now signs as not worth the paper it is printed on.

Those in the know will understand that if the US does breach the agreement, and if Iran were to begin producing weapons grade material and combine that with mini-nuke technology, Iran would have parity with the West’s ability to arm itself with a lot of tactical mini-nuke missiles, just like the major Western countries have, but don’t like to discuss it… Jim W. Dean ]

“According to reliable information, the missile operation against Daesh has been successful,” he said. The attack, he said, was “only a fraction of Iran’s punitive power against terrorists and other enemies.”

Amir Ali Hajizadeh, commander of the IRGC’s Aerospace Force, said the missiles were fired from the Iranian provinces of Kermanshah and Kurdistan and flew over Iraq before landing in Syria.

“The UAVs which had been flown from around Damascus to Dayr al-Zawr transmitted the moments of impact to us in Iran,” he said, adding “the missiles precisely hit their targets.”

According to Fars news agency, which is close to the IRGC, preliminary evidence showed a large number of terrorists had been killed and their weapons destroyed. The IRGC said the attack, the first of its kind in Iran, was in response to a terrorist operation which claimed the lives of 18 Iranians in Tehran earlier this month.

“Our enemies must know that Tehran is not London and Paris. This was a small job and if they put another foot wrong, more deadly blows will come down on their heads,” Hajizadeh said.

Expert examinations of the footage broadcast on state television of the attack identified at least one of the projectiles as the Zolfaqar missile. Among Iran’s medium-range missiles, Shahab 2 and Qiam can fly as far as 700 and 800 kilometers respectively.

Zolfaqar is a solid-fueled medium-range ballistic missile (SRBM) that can reach 700 to 750 kilometers and is accurate within 5 to 10 meters. It is Iran’s latest variant of the Fateh-110 missile series — a family of solid-fueled SRBMs that Tehran has refined since the 1990s.

The projectile uses a multiple reentry vehicle payload, featuring a cluster warhead that can shower an area with sub-munitions. That explains why the missile was used against multiple targets in Sunday’s attack, including Daesh’s command center, gathering points and ammunition depots.

Other features include the missile’s radar-evading and anti-jamming properties and operation with mobile and self-propelled light tactical launchers.

“Identifying terrorist bases and possessing intelligence command in this regard is a world of issues. Firing missiles from a 600-700 km range and landing it over a small building carries a message, meaning they would realize where Iran’s fineness is,” Hajizadeh said.