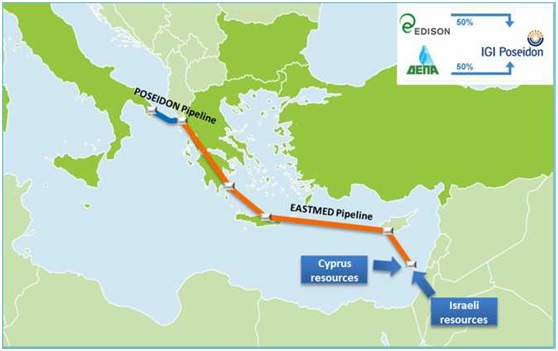 How did this came about? How did the Cypriots, who are known to support the Palestinian cause, become a province of the Israeli empire?

An Israel-Europe gas pipeline deal is the answer.

In the beginning of April we learned about a proposed 2,000 kilometer subsea pipeline connecting gas fields located offshore in Gaza and Cyprus with Greece and possibly Italy.

The pipeline agreement among Israel, Italy, Cyprus and Greece leaves both the Turks and the Palestinians out. While Gaza faces a critical energy crisis with electricity reduced to less than three hours a day; Israel aims to collect billions of dollars from a significant natural gas reserve located off the Gaza shore and well within Palestinian territorial water (assuming such a term exist).

Yuval Steinitz, Israel’s energy minister,  hailed the pipeline project expected to be in operation in 2025 as the “beginning of a wonderful friendship between four Mediterranean countries.” Of course, not all related Mediterranean nations are included in the deal. We can foresee that this is a recipe for disaster: the pipeline and the gas installation are soft targets. The region is volatile. Cyprus is putting its sovereignty at risk. It may, within a short time, God forbid, become a battle ground for some merciless global operators.

Cyprus leadership realises that it has to become an Israeli province if it wants an oil pipeline that dispatches plundered Palestinian natural gas. And as the video reveals, Cyprus is now protected by its Israelite big brother. The Israeli-Cypriot joint military drill was performed to deliver a message to Turkey and other regional players: any attempt to interfere with their gas theft project will be met by Israeli military brutality.