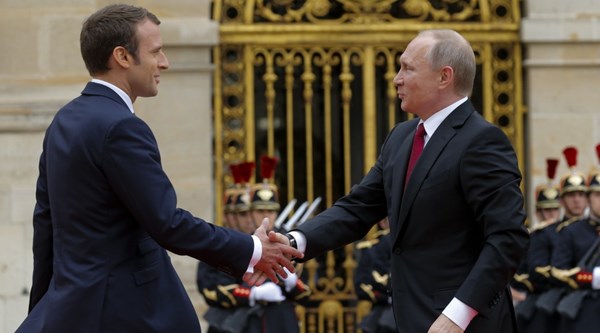 “Brother, why can’t we be friends?”


Warmongers and New World Order agents are obviously having a bad day. French president Emmanuel Macron has recently ruined their ideological worldview by saying that the West must stand with Russia in Syria in order to eradicate terrorist cells and organizations in Syria.

Jim W. Dean has recently reported: “Macron is rocking the boat even more than on the Syrian controversy. He is coming out swinging again against US Neo-Conservatism, which he does not want in France.  And he has shown his independence also from Israel with both this and his Assad stance.” Macron has argued quite frankly:

“The new perspective that I have had on this subject is that I have not stated that Bashar al-Assad’s departure is a precondition for everything, because nobody has shown me a legitimate successor.

“My lines are clear: Firstly, a complete fight against all the terrorist groups. They are our enemies. We need everybody’s cooperation, especially Russia, to eradicate them.”[1]

This must be really disappointing for Neocons like Max Boot, who thought that Macron was anti-Putin.[2] National Review, a Neocon flagship, declared last May that Macron “is no friend of Putin,” therefore “American Conservatives should support Macron.”[3] Similarly, Bloomberg declared in the same month that “Macron Win Is Bad for Putin, Good for Team Merkel on World Stage.”[4]

Well, Macron seems to betray the Neoconservatives. He shows that he has some political backbones, for we all know that it takes courage to stand against the New World Order ideology in Syria and warmongers in the United States. Keep also in mind that Macron radically overturned France’s position in Syria.

Former French President Francois Hollande told the UN in 2015: “Assad is the origin of this problem, and cannot be part of the solution.”[5] Hollande is gone, and Assad is still in power.

Macron added something that obviously makes him an enemy of the Neoconservatives in America and England—the same people who are spreading perpetual wars in the Middle East in the first place. Macron was reported to have said that he

“will not allow US ‘neo-conservatism’ to seep into France, and that the focus of French policy will be aimed at achieving ‘stability’ in Syria, rather than getting dragged into a Libya-style conflict.”[6]

Macron moved on to say: “What was the outcome of these interventions? Failed states in which terrorist groups flourished. I do not want that in Syria.”[7]

Macron, of course, disagrees with Vladimir Putin on certain issues, and that is understandable. But that does not mean that two grown men cannot sit down and rationally talk about important issues in the Middle East.

Both Putin and Macron have many things in common. And the fact that Macron sides with Russia on the issues in Syria means that puppets and marionettes like John McCain and Lindsey Graham are becoming obsolete. Granted, they are still roaring like hungry lions, but their political teeth are falling by the numbers. Macron declared:

“My deep conviction is that there needs to be a diplomatic and political roadmap. We won’t solve the question only with military force. That is a collective error we have made.”[8]

Well, a diplomatic and political roadmap is not congruent with what the Neoconservatives have been doing in the Middle East at all. The Neocons want to use force to bludgeon men, women and children to death. They don’t care about the cost; they don’t care about blowback. They want to establish an essentially Talmudic kingdom in the Middle East. In order for that to happen, they have to kill, steal, and destroy anything or anyone who stands in their way.

If that sounds farfetched, perhaps we should bring in Daniel Pipes in our discussion. He wrote unequivocally that the West needs to support both the Syrian rebels/terrorists AND the Assad government so that they could end up killing each other in the process.

Pipes is not a complete idiot. He knew that this is diabolical and that no rational human being would come up with such a pernicious plan. But he had to say that because he is working with an ideology that does not allow sound reasoning and sober thought. He said: “This policy recommendation of ‘helping whichever side is losing’ sounds odd, I admit, but it is strategic.”[9]

Translation: “This policy recommendation of ‘helping whichever side is losing’ sound satanic or Talmudic, I admit, but the Israeli regime or the Talmud does not allow me to think things clearly. Sorry.”

How many of those “stupid animals” people like Kissinger have killed for Israel? In 2014, it was reported that at least 4,486 American soldiers died in Iraq alone.[11] In January of the same year, at least 500,000 Iraqis lost their precious lives.[12] And how much will the war cost again? Six trillion dollars![13]

[4] Marc Champion and Nick Wadhams, “Macron Win Is Bad for Putin, Good for Team Merkel on World Stage,” Bloomberg, May 9, 2017.