The  52nd edition of the International Paris Air Show, officially Le Salon International de l’Aéronautique et de l’Espace , the oldest and most popular show in the industry,  dating from 1909 is being held from June 19-25 at  Le Bourget Airport. The first three days were  reserved for professionals and the press while the general public can attend from June 23-25.  During the professional days, there were many deals made some of which were for billions of US dollars.  During the public days there are 30,000 square meters of lan reserved for viewing  the airplanes shows from the sky.  For the most comfort visitors can pay for grandstand seats ( of which there are more than 3,000).

Each day there is a program of between 2 and 3 hours for the air shows. 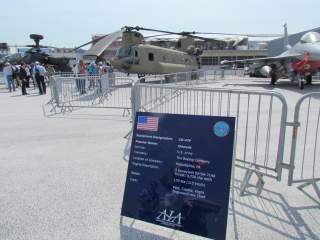 The entry ticket gives free entry to the Musée Air + Espace  (Air and Space Museum) located at the Bourget Airport. It has more than 150 aircrafts on display and a planetarium.

For  a fee of 10 Euros the general public can tour the Concorde and a Boeing 747 airplane.

This area is for conferences with leading professionals to discuss and debate current major evolutions and those in the near future;

I found this the most interesting because of the virtual reality. Six themes included

in the cockpit, in flight, exploring space,  becoming an astronaut, a Constellium Experience and Accenture Hololens;

I met Sami Guillermet the creative director feim VR Connection  which is the first hub for French Virtual Reality.  VR Connnection brigngs more than 50 companies togethe  using their experience of the French know-how in virtual reality; VR  Connection finds innovative solutions to problems. VR Connection’s lab is showing a virtual reality prototype for a helicopter pilot simulator. It  is exclusively for the Air Show.

A flying car named Pegasus from Vaylon which flew from Calais in France to Dover in England using  its paragliding sail and large fan glued to its rear, was presented for the first time at Paris Air Show.

A octocopter  Surefly, manufactured by Workhorse is on display. It is a VTOL ( vertical take off and landing) and features a 2 seat cabin , an automobile chasis and 8 single blade propellers. At a cost of $US 200,000 it is  thought to be used for agriculture and military.