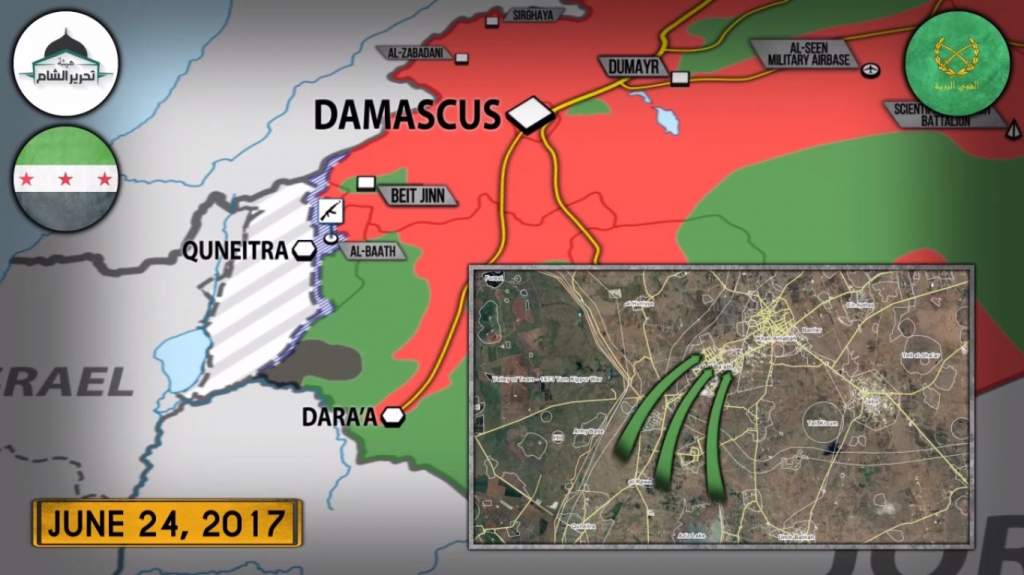 Last weekend, Hayat Tahrir al-Sham (HTS) and allied groups from the so-called Free Syrian Army (FSA) launched a large-scale advance against the Syrian Arab Army (SAA) in the province of Quneitra. The militants had formed an operation room named Jaysh Muhammad for the purpose and said that their aim was to capture al-Baath town and to reach the countryside of Damascus.

On Saturday, the joint militant forces made some gains against the SAA and even claimed that they seized over a half of al-Baath. However, further clashes showed that HTS and their allies were not able to break the government defenses.

Following a fail of the militant advance, the Israeli Air Force conducted airstrikes on government positions in the province claiming that some projectiles landed in the Israeli-occupied part of the Golan Heights. The airstrikes targeted undefined number of artillery pieces and two battle tanks of the SAA.

On Sunday, the Israeli Air Force carried out airstrikes on the SAA in Al-Baath in Quneitra province for the second day in a row under the same pretext. According to the Israeli military, the airstrikes hit artillery positions and an ammunitions truck.

Following the Israeli strikes, militants launched the second large-scale attempt to break government defense lines in al-Baath but failed to achieve any gains.

At the same time, reports appeared HTS and its allies once again launched an attack against the SAA in al-Baath.

Syrian experts describe the Israeli actions as a clear assistance to the terrorist group fighting the legitimate Syrian government in the border area. According to them, Tel Aviv is deeply concerned over successful SAA operations against ISIS and other militants across Syria. Thus, it takes measures to undermine the Syrian war on terror.

Meanwhile, the SAA Tiger Forces have successfully advanced against ISIS at the Ithriyah-Resafa road. They liberated Bir Abu Alaj, the Syriatel checkpoint and some nearby points, becoming close to a full liberation of the road. This advance is an important step aimed at securing the whole area east of Khanasir.

The US-backed Syrian Democratic Forces (SDF) have continued storming the ISIS-held city of Raqqah. They encircled the city from the southern flank and clashing with ISIS inside it, including the southern part of the 17th Army Base.

ISIS terrorists used at least 3 VBIEDs against SDF units in Al-Jazra and Al-Idikhar districts of the city. Clashes are also ongoing in Al-Qadisiya and Al-Yarmouk districts.