US President Donald Trump ignored reports from US intelligence that said they had no evidence Syria had used sarin to attack a rebel-held town, Pulitzer-winning investigative journalist Seymour Hersh says.

Hersh is most famous for exposing the My Lai Massacre and its cover-up during the Vietnam War. He also uncovered the abuse of prisoners by US personnel at the Abu Ghraib prison in Iraq. In a report published by the German newspaper Die Welt on Sunday, he describes how the Trump administration mishandled the media frenzy after the Syrian bombing of the rebel-held town Khan Sheikhoun in April.

Trump chose to ignore reports compiled by American intelligence and the military that contradicted the prevailing media narrative accusing Damascus of using sarin gas to kill civilians, the report says, citing accounts by anonymous US military advisers. Instead, he ordered his military to prepare options for a response, which they did.

The subsequent Tomahawk attack on the Syrian Shayrat Air Base did less damage that the White House claimed, as was apparently intended by the military planners of the operation, Hersh said. The US mainstream media failed to question the government’s narrative of the situation, instead giving Trump what appears to be the pinnacle achievement of his presidency so far.

“None of this makes any sense,” one US officer told colleagues upon learning of the White House decision to retaliate against Syria. “We KNOW that there was no chemical attack… the Russians are furious. Claiming we have the real intel and know the truth… I guess it didn’t matter whether we elected Clinton or Trump.”

Hersh’s report is based on interviews with several US advisers and evidence they provided, including transcripts of real-time communications that immediately followed the Syrian attack on April 4. According to the advisers, the Syrian Air Force’s attack on Khan Sheikhoun targeted a meeting of several high-value leaders of jihadist groups, including Ahrar al-Sham and Al-Nusra Front, which has changed its name to Jabhat al-Nusra. 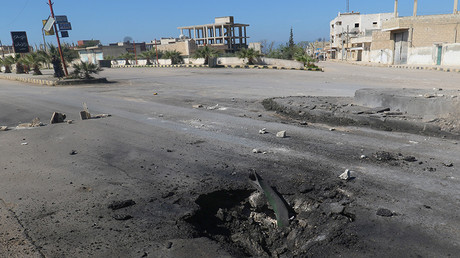 The US was informed of the operation in detail beforehand as part of a conflict prevention arrangement with Russia. The two-way information sharing in place in Syria at the time helped the US-led coalition and Russia-backed Damascus to avoid accidental encounters in the air, protect intelligence assets on the ground, and coordinate with each other when planning missions.

“They were playing the game right,” a senior US adviser is cited by Hersh as saying regarding the pre-mission notice from Russia.

“It was a red-hot change. The mission was out of the ordinary – scrub the sked,” the adviser said. “Every operations officer in the region” – in the Army, Marine Corps, Air Force, CIA, and NSA – “had to know there was something going on. The Russians gave the Syrian Air Force a guided bomb and that was a rarity. They’re skimpy with their guided bombs and rarely share them with the Syrian Air Force. And the Syrians assigned their best pilot to the mission, with the best wingman.”

The special weapon used in the bombing was mentioned in Syrian communications collected before the attack by a US ally. The interception was widely reported in the Western media as an indication that Damascus had used a chemical weapon.

“If you’ve already decided it was a gas attack, you will then inevitably read the talk about a special weapon as involving a sarin bomb,” the adviser told Hersh. “Did the Syrians plan the attack on Khan Sheikhoun? Absolutely. Do we have intercepts to prove it? Absolutely. Did they plan to use sarin? No. But the president did not say: ‘We have a problem and let’s look into it.’ He wanted to bomb the shit out of Syria.”

The target of the Syrian bombing was described as a two-story cinder-block building. According to Russian intelligence, the jihadists used the second floor as a command and control center. The first floor housed a grocery store and other businesses. The basement was used as a warehouse for weapons, ammunition, and goods, including chlorine-based decontaminants and fertilizers.

“The rebels control the population by controlling the distribution of goods that people need to live – food, water, cooking oil, propane gas, fertilizers for growing their crops, and insecticides to protect the crops,” a senior adviser to the American intelligence community told Hersh. 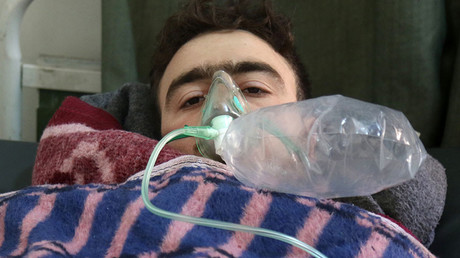 According to a US assessment of the morning airstrike cited by Hersh, the 500-pound Russian bomb triggered secondary explosions.

The heat could have evaporated the chemical products in the basement, producing a toxic cloud that spread over the town, pressed close to the ground by the dense morning air.

The scenario is consistent with the accounts of patients who reported a chlorine odor in interviews with Medecins Sans Frontieres. It could also explain the symptoms of nerve agent poisoning that were attributed to sarin, but may have been caused by organophosphates used in many fertilizers, Hersh said.

Meanwhile, US intelligence had no evidence to indicate the presence of sarin gas at or near the Shayrat Air Base, from which the bombing mission was launched.

“This was not a chemical weapons strike,” the journalist cites a source as saying. “That’s a fairy tale. If so, everyone involved in transferring, loading and arming the weapon – you’ve got to make it appear like a regular 500-pound conventional bomb – would be wearing Hazmat protective clothing in case of a leak. There would be very little chance of survival without such gear.”

“Military grade sarin includes additives designed to increase toxicity and lethality. Every batch that comes out is maximized for death. That is why it is made. It is odorless and invisible and death can come within a minute. No cloud. Why produce a weapon that people can run away from?” the adviser added.

The Trump administration quickly adopted the rebel narrative, which accused President Bashar Assad’s government of conducting a sarin gas attack on Khan Sheikhoun. Top US officials went on to condemn Damascus and accuse Russia of complicity in the bombing. Trump ordered the national defense apparatus to prepare a response within hours of seeing photos of poisoned children on TV, Hersh’s report cites a senior adviser as saying.

“No one knew the provenance of the photographs. We didn’t know who the children were or how they got hurt,” the adviser said. “Sarin actually is very easy to detect because it penetrates paint, and all one would have to do is get a paint sample. We knew there was a cloud and we knew it hurt people. But you cannot jump from there to certainty that Assad had hidden sarin from the UN because he wanted to use it in Khan Sheikhoun.”

“The president saw the photographs of poisoned little girls and said it was an Assad atrocity,” he added. “It’s typical of human nature. You jump to the conclusion you want. Intelligence analysts do not argue with a president. They’re not going to tell the president, ‘if you interpret the data this way, I quit.’” 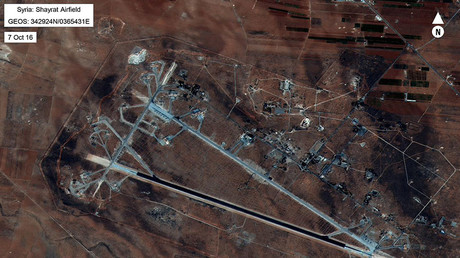 At a national security meeting at Mar-a-Lago on April 6, Trump was offered four options for responding to the Syrian incident, ranging from doing nothing and to assassinating President Assad, the report said. Eventually, the US president chose to attack the Syrian air base, which Hersh’s source described as “the ‘gorilla option’: America would glower and beat its chest to provoke fear and demonstrate resolve, but cause little significant damage.”

Of the 59 Tomahawk missiles fired at Shayrat, as many as 24 missed their targets because the initial strikes hit gasoline storage tanks, triggering a huge fire and a lot of smoke that interfered with the guidance systems of the following missies. Only a few actually penetrated the hangars, and these only destroyed nine aircraft that were apparently not operational and could not be moved during the window of opportunity between the US warning of the looming attack and the strike itself.

“It was a totally Trump show from beginning to end,” the senior adviser told Hersh. “A few of the president’s senior national security advisers viewed the mission as a minimized bad presidential decision, and one that they had an obligation to carry out. But I don’t think our national security people are going to allow themselves to be hustled into a bad decision again. If Trump had gone for option three [a massive attack on Syrian military facilities], there might have been some immediate resignations.”

Trump trapped by own mistake

The reaction to the show of force in the US media was probably everything the Trump administration could have hoped for. MSNBC anchorman Brian Williams described the sight of Tomahawks being launched at the Syrian base as “beautiful.” CNN host Fareed Zakaria reacted by saying that Trump finally “became president of the United States.”

According to Hersh, of the top 100 American newspapers, 39 published editorials supporting the bombing in its aftermath, including the New York Times, Washington Post, and Wall Street Journal. 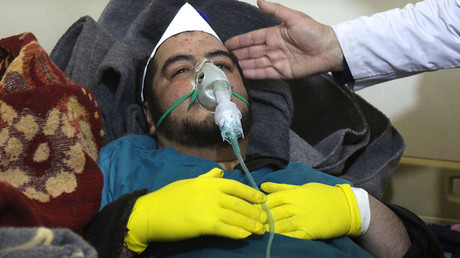 Five days later, the White House briefed the national media on the operation and the US response to Russia’s assertion that Syria has not used sarin gas. The Trump administration’s insistence that a chemical attack actually did happen was not challenged by any of the reporters present.

The following US coverage of the situation accused Russia of trying to cover up the alleged chemical attack, Hersh says. The New York Times described “declassified information” released during the press briefings as coming from a “declassified intelligence report,” though no formal report from US intelligence stated that Syria had used sarin, Hersh notes.

“The Salafists and jihadists got everything they wanted out of their hyped-up Syrian nerve gas ploy,” the senior adviser told him. “The issue is, what if there’s another false flag sarin attack credited to hated Syria? Trump has upped the ante and painted himself into a corner with his decision to bomb. And do not think these guys are not planning the next faked attack. Trump will have no choice but to bomb again, and harder. He’s incapable of saying he made a mistake.”