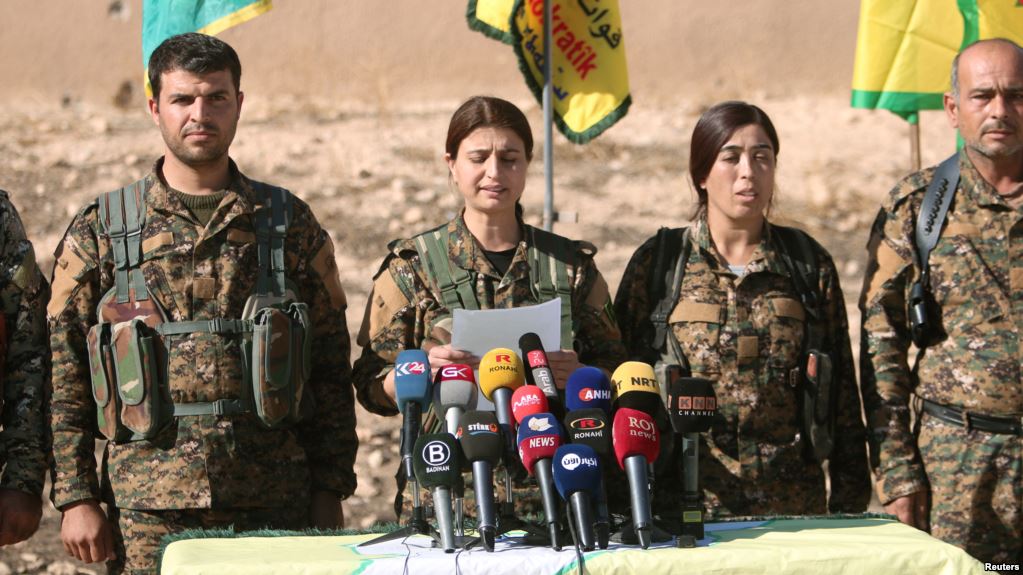 [ Editor’s Note: I had not written this NEO piece just for the Syrian shootdown coverage. I knew there would be others that would quickly submit articles, and NEO does not want “swarm” coverage on such events. So I focused on using the shootdown story as a stepping stone to a bigger one that would have more shelf-life.

And that was the US having pushed the Kurds into South Raqqa, not so much to cut off ISIS retreating south to fight the SAA, but to take as much Arab oil-producing land to be sitting on before the political talks really get down to the nitty-gritty details.

How much territory you are holding is the number one thing that counts in those negotiations. Number two is, do you have the ability to hold it? Uncle Sam is the SDF’s ace in the hole in that game.

As I had suspected, no one was really covering that angle. But the Pentagon must have read my NEO piece. Yes, they monitor what Gordon and I publish. There was a follow-up story, where the Pentagon said it had assured Turkey that it would collect up all of its arms from the SDF Kurds when Raqqa was taken. The “fake news” bells were ringing in my head like crazy, but Erdogan confirmed the story, adding that he was suspicious.

That was a good call by Erdo, as Secretary of Defense Mattis added the caveat that I had been expecting would fall – which was that the SDF arms would be collected, if another mission did not become available for their participation. I rest my case… JD ]

For advertisement-free reading, you can also read this post here. http://ntelvets.com/neo-the-syrian-coalition-must-end-us-kurdish-aggression-now/

The US plan for the Balkanization of Syria is now laid bare for all to see. The events of the past few weeks have removed any rose-colored glasses from all but the most blind American hegemony apologists. The shooting down of Syrian pilot Captain Ali Fahed’s plane was like a period at the end of a criminal confession.

Simply put, the phony US anti-terrorism coalition wants to push as much of the remaining ISIS forces out of Raqqa into combat with the Syrian-Arab Army (SAA) and replace the “liberated” territories with a new occupier. Who could that possibly be?

Well of course, it is the good old USA and its New Kurdish Army who are showing they never planned to push ISIS out of just their own Kurdish part of Syria, but to grab as much of the historically Arab populated areas as possible, particularly those with economic resources like water, agriculture and oil.

We have reports of a US 50-truck convoy crossing into Kurdish territory last week filled with more arms than were brought in to take Raqqa. Someone is planning a stage two that will be bigger than the Raqqa campaign, and in non-Kurdish areas. Who gave them permission to do that?

Exposure of this plan was spotlighted with the F-18 Hornet shoot-down of Captain Fahed’s aged SU-22 in a bushwhack manner, similar to the Turks’ shooting down the of Russian plane in NE Syria – attacking it after a bombing run from behind with an air-to-air missile. Veterans Today’s analysis concludes that the US triggered this event in an attempt to establish an occupier type red-line

The official Pentagon report states that the Syrian plane dropped bombs “near” Kurdish Syrian Democratic Forces, (SDF). Earlier reports had mentioned wounded, but no dead. The word “near” is critical, as it admits no proof of actual intent to strike SDF Kurdish forces.

All military professionals understand that a fast-moving battle campaign, which the Tiger Forces have been engaged in while clearing eastern Aleppo and then moving into South Raqqa, makes keeping track of battle lines difficult. There have been some behind-the-scenes de-confliction lines between the SDF and the Tiger Forces, but those seemed to be challenged now.

When Captain Fahed was exiting the strike area back toward Damascus, he was no longer a threat with empty bomb pods, yet the Navy F-18 was ordered to shoot him down under the guise of force protection. The proper response would have been to use the hotline to report the event, especially when there had been no strike “on” SDF forces. Whether he was bombing near the SDF as a warning to not impede the Syrian advance to Resafa, we do not know at this time. But remember that in southeast Syria a few weeks ago the US shot up a Syrian convoy 40 kms from al-Tanf, deeming it to be a threat.

So we have the US appointing itself the final judge of using air-power against the Syrian anti-terrorism coalition to protect its proxy forces, even while the US is operating inside Syria without permission and in violation of international law or UN precedent, and planning to take over much more of Syria. Does anyone see anything wrong with that?

The US replaces ISIS with the SDF to take Syrian territory

The US is establishing a new forward base in Tabqa city, an Arab town. Raqqa itself is not Kurdish territory, but has been Arabic for ages. Yet the US and the Kurds are openly challenging Syria for possession of its own territory. Calling the US actions an anti-terror campaign is one in name only. Syria is being carved up like a Christmas turkey.

The huge new arms shipment coming in when the battle for Raqqa is a forgone conclusion, coupled with the new US base at Tabqa, can mean only one thing. The US is planning a major move to grab the oil fields with the SDF forces and push east so as to take control of all those key natural assets of Syria. These will be addes to the planned Kurdish state, which will become totally dependent on US military power and Saudi cash as part of the de facto Balkanization that was originally planned for Syria.

Western media has completely air-brushed the South Raqqa oil fields economic issue from the war reporting, despite the Kurds pushing south in their attempt to block the Tiger Forces from capturing the strategic Resafa crossroads, which would block an important escape route for ISIS forces fleeing Raqqa.

Liberating Resafa also secures the important major supply road, the Ithyria highway, for the SAA advance into the remaining South Raqqa oil fields. SAA forces in Hama are attacking east along the highway to trap ISIS units to the north and cut off their supply lines, where they will then have a limited combat capability. Only Southfront has been publishing its daily combat maps of the battlefield showing the location of the oil fields.

As Syria clears these rear areas of ISIS units, that releases those SAA static defensive troops for the big offensive push to Deir-Ezzor. The Syrian coalition has to block the US coalition from advancing wherever it wishes. This is hardly aggression on the Syria’s part, but a duty to the Syrian people. That is why the US gambled on this SU-22 shoot down, which so far has backfired.

Missed in the initial reporting was that Russia had air cover in the vicinity of the shoot down, but did not fire on the F-18 as a “force protection” reaction. The Russians never bite on a quick trigger provocation, and the Navy pilot is still alive because of this. What Moscow has done, is effectively made the area west of the Euphrates a no-fly zone for the US Coalition, and the US has already re-positioned its air assets.

“Force protection” is a game two, or three, can play

The US has pulled back before. After the knee-jerk Trump missile strike after an alleged gas attack in Idlib that had not even been investigated, the US switched to only using drone attacks for Raqqa combat support missions and flew only F-35s as air cover, due to their enhanced stealth capability.

The New York Times agrees with my analysis, “The collision of the disparate forces has, in effect, created a war within a war. The latest escalation comes as competing forces converge on ungoverned swaths of Syria amid the country’s six-year civil war.”

If I were the Syrian coalition, I would extend the no-fly zone into a “no go” zone for the SDF, that it will be attacked if it advances any further into Syrian Arab territory, period. The Pentagon would have to back down, as the American people will not support the occupation of Syria under the guise of removing ISIS. Congress will, but not the people.

The big question now is, will Iraq play a key role in releasing a division or two of the Popular Militias to attack ISIS from the rear, up the Euphrates from the al-Bakumal crossing? ISIS would then have a major two-front war on its hands and the Syrians could advance much quicker from Palmyra to relieve their long-surrounded garrison at Deir-Ezzor. More important, ISIS would have no escape route where it could live to fight another day.

It is time to let the US coalition know that if it wants a war in Syria, all it has to do is try to take more Syrian territory using the SDF and their proxy forces, or impede the Syrian coalition from its liberation work. The US is not needed to defeat ISIS now. In a coalition, Syria, Russia, Iran and Iraq can defeat ISIS.

If they stand together, they can build some long-term security for themselves by fully controlling their borders and not allowing freedom of action by the US coalition, which with its proxies would just be replacing ISIS as the mortal threat to Syria and others.