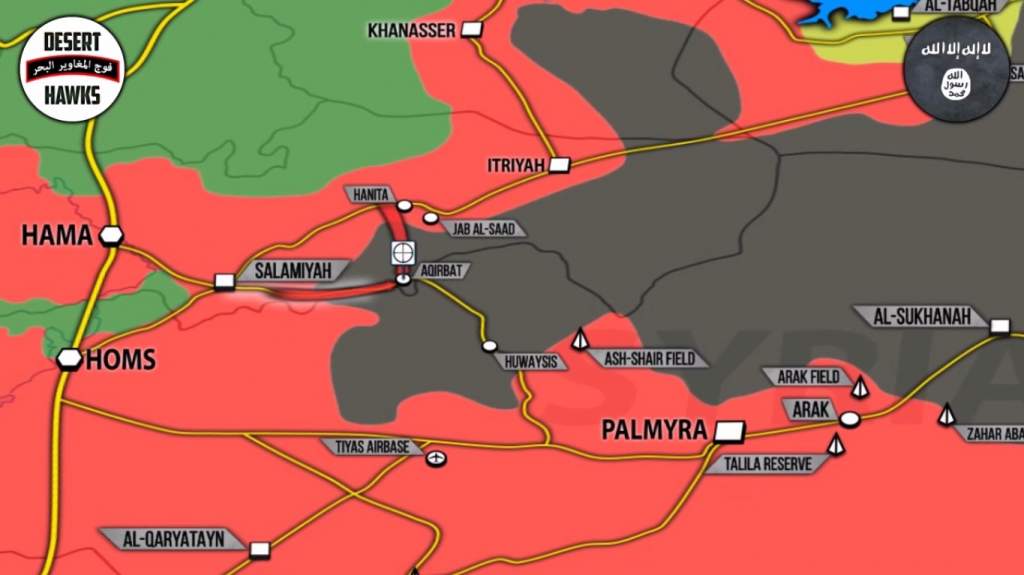 The Desert Hawks Brigade has deployed large reinforcements in order to support the expected Syrian army advance against ISIS in the Eastern Hama countryside.

A video showing a Desert Hawks Brigade military convoy appeared online showing two Shilka vehicles, 3 modified BMP-1 vehicles, 3 new BMP-2 vehicles, a T-72B1 battle tank, three T-90A battle tanks, and three Gvozdika self-propelled guns. According to sources from the brigade, this convoy is just a part of the force that will participate in the operation.

Government forces are aiming to liberate the strategic ISIS town of Aqirbat as well as secure the road heading to the Palmyra.

The Syrian Army and its allies set up a fortified military base south of the Zaza triangle at the Al Tanf road. The base includes fortifications, artillery pieces, and armored vehicles. The Syrian army aims to strengthen its presence in the area in order to be ready for any possible advance by US-backed militant groups.

Government forces have captured some positions from ISIS 10 km east of the Arak gas field in the countryside of Palmyra. The army also established control of nearly the entire road between the T2 and T3 pumping stations.

A battle is ongoing near the strategic Humaima village, located within 80 km from the ISIS-held town of al-Bukamal. Humaima and the T2 pumping station are mid-term goals of the Syrian military.

The Syrian Democratic Forces (SDF), backed up by the US-led coalition, have captured Hattin district and advanced on ISIS in the Nahda district of Raqqah city where an intense fight is ongoing.

Local sources report that the US-led coalition air force and military strikes by US Marines play a key role in the SDF strategy inside the city. The SDF simply calls in military strikes on any ISIS strong point that it sees in the nearby area. However, ISIS actively uses tunnels preventing SDF units from rapid advances.