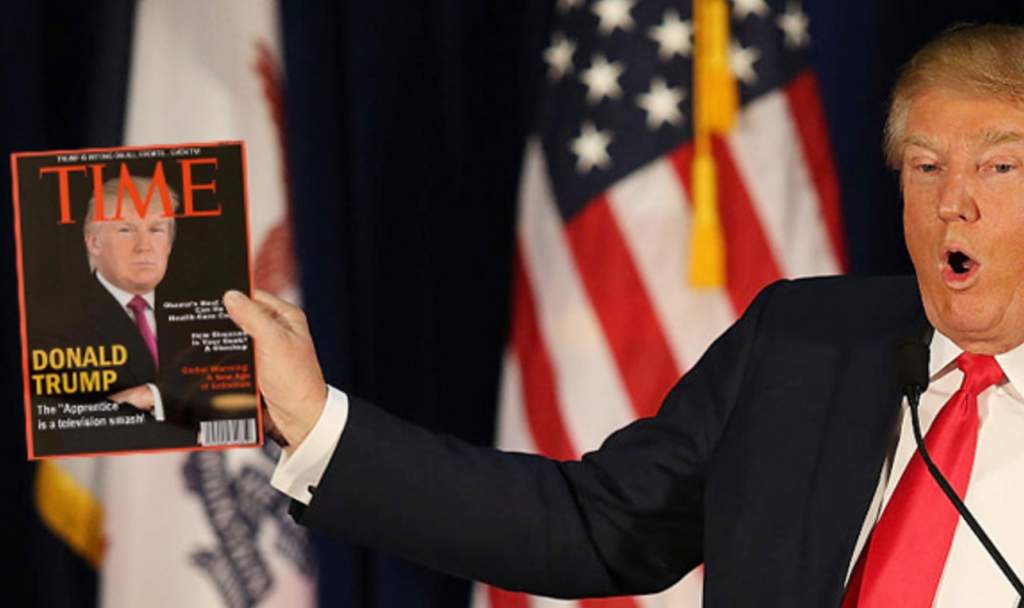 President Donald Trump has been asked to remove all fake “Time” magazine covers from his resorts, after it was revealed that a framed cover of the magazine hung in his resorts is not real. The cover, entitled, “Donald Trump: The ‘Apprentice’ is a television smash!” features a photo of Trump along with the claim, “Trump is hitting it on all fronts… even TV!”

The framed picture has been hung in at least seven of Trump’s golf resorts, including properties in Ireland, Scotland, Virginia, New Jersey and Florida.

It pointed to a number of inconsistencies with the fake, including the Trump-like use of exclamation points, the use of thicker lines and the incorrect positioning of secondary headlines.

You photoshopped yourself onto a cover of TIME. https://t.co/ANF1ME8xen

Another one! Reader J.P. Newport took this at @realDonaldTrump club in Hudson Valley, NY during a tournament last yr. Anybody else seen it? pic.twitter.com/hoX1VIuQ2i

The Trump Organization didn’t respond to requests for details about who created the cover and why.

“We couldn’t comment on the decor at Trump Golf clubs one way or another,” White House spokeswoman Sarah Huckabee Sanders told the Post.

Time confirmed there was no March 1, 2009 issue, but a March 2 issue had Kate Winslet on the front.

The copy of Time magazine was hung up in at least 5 of Trump’s clubs Filling the entire cover was a photo of Trump.but all are phony . pic.twitter.com/6URM4wnVDe

“I can confirm that this is not a real TIME cover,” Time spokesperson Kerri Chyka told the Post.

Trump tweeted an attack on Amazon, the company of the Washington Post’s owner, Jeff Bezos, on Wednesday. He accused the Post of being fake news and accused Amazon not paying internet taxes.

The #AmazonWashingtonPost, sometimes referred to as the guardian of Amazon not paying internet taxes (which they should) is FAKE NEWS!

If you want a REAL example of fake news, check the walls of your golf clubs. pic.twitter.com/qQGZcbUWWz

Also, T-ball, it’s too soon to start deflecting from the 5 Fake Time covers you displayed in your ‘resorts.’ Need a full 24 hrs THEN you go. pic.twitter.com/L3QXafH45v