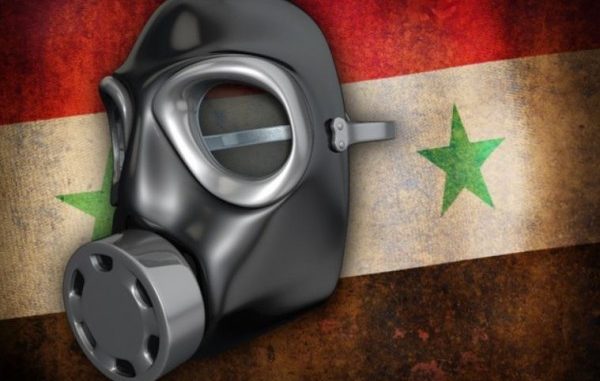 Nikki Haley: “Any further attacks done to the people of Syria will be blamed on Assad, but also on Russia & Iran who support him killing his own people.”

Studying history sometimes is not a pleasant enterprise. It can bring to light painful wounds and memories. Yet it is largely through a study of history that the present can make more sense. As George Santayana put it at the dawn of the twentieth century, “Those who cannot remember the past are condemned to repeat it.”[1]

If you are student of history, then you are going to see parallels between the past and the present. For example, both the New York Times and the BBC declared in 2014 that the international community removed any trace of chemical weapons in Syria.[2] The Times itself said then:

“After months of delay, Syria exported the last of its known supplies of chemical weapons components for destruction overseas, the Organization for the Prohibition of Chemical Weapons announced, calling it a major achievement in a country engulfed by war.”[3]

Though the Organization for the Prohibition of Chemical Weapons didn’t say that the job in Syria was complete, it was pretty well confirmed then that the Assad government was more than willing to comply with the international community with respect to chemical weapons.[4] Even this year, Russia has been saying that if the West sends independent experts in the region, they will discover that Assad never used chemical weapons in the region.

Now we are in 2017. The warmongers in Washington have repeatedly declared that Assad used chemical weapons without an iota of evidence. We know that Assad has everything to lose and the so-called Syrian rebels, as former CIA officer Philip Giraldi has recently pointed out, “have motive to use chemical weapons.”[5]

But let us grant the warmongers the silly premise again that Assad did use chemical weapons. Where did he get those chemical weapons? From Iran? Russia? China? Did Assad make them? Do those warmongers mean to tell us that the Organization for the Prohibition of Chemical Weapons didn’t do a good job when they inspected Assad’s facilities? Did Assad, the president of a small country, outsmart them?

You see, warmongers can never get to the bottom of these fundamental issues because they are operating with an essentially satanic ideology, which always seeks for fresh blood in the Middle East. The Organization for the Prohibition of Chemical Weapons has recently come out and declared that Assad probably used chemical weapons, but the government declared that the organization got the “evidence” from the so-called Syrian rebels and other terrorists,[6] an implicitly circular argument which makes no sense whatsoever.

Warmongers and Neocon puppets think that perpetual wars in the Middle East are just video games. They think they can kill people and destroy countries at will. They are never satisfied with destroying just one country. They are obsessed with destroying them all for the Greater Israel. They pretend to care for the Syrians; that’s why they keep reporting that thousands upon thousands of Syrians are dying and fleeing from their precious homes. The West must do something, they say.

But these people can never say that the West, particularly the United States and England, should stop supporting terrorist cells in the region. They can never report that at least “4,928 people were killed in Iraq” died in Iraq just last month. They can never report what happened to Iraq after the 2003 debacle. Just in case you didn’t know, here are some incontrovertible facts.

From 2003 to 2012, over two thousand doctors and nurses, and over four hundred academics, have been assassinated in Iraq. Others have emigrated due to violence in the region. In 1990, there were about thirty thousand registered doctors in Iraq. By 2008, more than fifteen thousand had already left the country. Then there is the high unemployment that has been ravaging sections of the region, combining with the fact that educational institutions have been in decline.[7]

This is the freedom that the Neocons have brought to Iraq; this is the sort of heaven these intellectual and political geniuses are seeking in the Middle East. And the ideological agenda of the Neoconservative movement progressively attacks Christian families and neighborhoods in the Middle East. Doug Bandow of the National Interest had the guts in 2010 to declare that “the historic Christian community has been largely destroyed” in Iraq after the war, where hundreds of Christians have been killed and exiled to other countries such as Syria and Lebanon.[8]

We are witnessing the same thing in Syria, where the Christian minority has been targeted by the Syrian rebels.[9] The rebels themselves have been known to support “senseless destruction, criminal behavior and the cold-blooded killing of prisoners.”[10]

By the end of November 2012, the Syrian war had caused at least 40,000 people to leave their homeland, and “1.2 million have been driven from their homes within the country, according to the United Nations refugee agency. Some 2.5 million people need humanitarian assistance, and the number keeps climbing.”

That particular month turned out to be a bad omen for the Syrians as well, as they faced “the onslaught of winter with inadequate shelter,” with many possessing “little more than a T-shirt and flip-flops.” With the temperature reaching zero degrees at night, 27-year old Mohamed Khair al-Oraiby lamented, “We already wake up early because it is so cold.”[11]