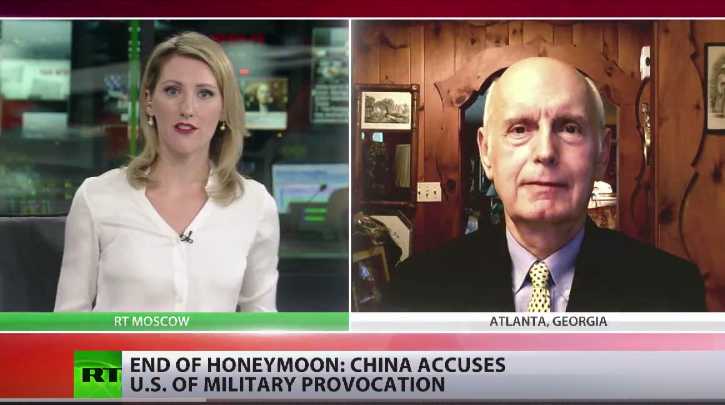 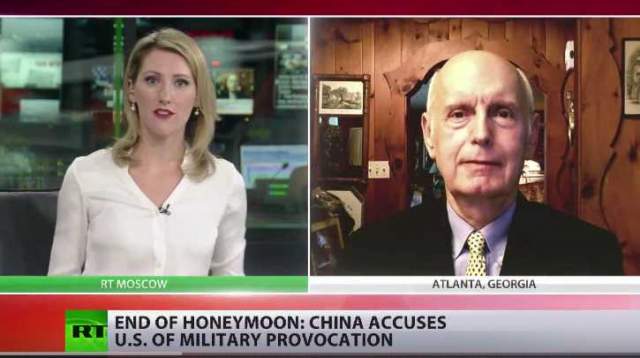 End of the Honeymoon: China accuses US of military provocation

[ Note: It’s summer time, and the news cycle can get slow, so what better than to do a billion-dollar plus arms deal with Taiwan, followed by a US missile destroyer “drive by” of one of China’s new fortified atolls. While RT picked a good title theme of the honeymoon being over, lots of married couples can tell you that does not mean the relationship is on the rocks.

China still holds a pile of US Treasury bonds, and has the largest long-term infrastructure plan in the world in motion, not the US. Its military expenditures are focused on defense, which is much cheaper than offense; and that leaves the saved money to go into infrastructure capital spending, which many would view as enhancing one’s defense even more by building a strong long term economy.

I took a gamble here with this RT interview, with my strong emphasis on the theatrical side of the US-China island spat, and even the N. Korea “threat” itself. But we have all been here before, with the puffed-up threat baloney, and I don’t see much commentary on it, even in alternative media. My point was not to trivialize the dispute, but to spotlight the US addiction to its bogeyman threat hustle of the American people.

N. Korea’s offer to end missile testing simply if the US and S. Korea ended their big joint maneuvers they hold every year, something that the NKs rightfully deem to be a major ongoing provocation. The offer was ignored not only by the US, but western media, also. When it was followed by the NKs saying they would begin talks with no qualifications at all, that also was ignored.

What we got instead was the age-old con of demanding something you know the other party cannot agree to, so the refusal can be spun to a distracted public as posing a threat. The NKs would be out of their minds to give away their missile testing card on the front end…for nothing.

But that is where Mr. “Art of the Deal” has put us, still not understanding that being President of the US is not a real estate deal that he can put into bankruptcy, or a reality TV show. I have been telling him this for some time, but unfortunately my record for presidents taking my advice has not been good.

However, I have put it on the record, as has Gordon so many times; so it is there to look back on in retrospect when the smoke clears and we can see what is still standing amid the ashes if the game playing spirals out of control… JD ]

China has sent military vessels and warplanes to “warn off” USS Stethem, a guided-missile destroyer, that sailed near a disputed island in the South China Sea, according to Chinese Foreign Ministry spokesperson Lu Kang.

“Under the pretext of ‘freedom of navigation,’ the US side once again sent a military vessel into China’s territorial waters off the Xisha Islands without China’s approval,” the spokesperson said in a statement, adding that such US behavior “violated Chinese law and relevant international law, infringed upon China’s sovereignty, and disrupted the peace, security and order of the relevant waters.”

“China dispatched military vessels and fighter planes in response to warn off the US vessel,” the statement reads.

“The Chinese side is dissatisfied with, and opposed to, the relevant behavior of the US side,” Lu added, calling the US warplane’s maneuvers a “serious political and military provocation.” He said that the US is “deliberately stirring up troubles in the South China Sea, as well as running in the opposite direction from countries in the region who aspire for stability, cooperation and development.”

The US Navy did not officially confirm the operation. The US Pacific Fleet spokesman, Lt. Cmdr. Matt Knight, told Fox News that the fleet conducts “routine and regular FONOPs, as we have done in the past and will continue to do in the future,” without specifically mentioning the Sunday incident.

However, an unidentified US Defense Department official earlier told Reuters that the US Navy destroyer USS Stethem came within 12 nautical miles of Triton Island, which is a part of the Paracel Islands located in the South China Sea between China and Vietnam.

The head of US Pacific Command, Admiral Harry Harris, recently criticized China’s activity in the region. “China is using its military and economic power to erode the rules-based international order,” he said in a speech delivered on Wednesday in Brisbane during the joint US-Australian military exercises. “Fake islands should not be believed by real people,” he added, as reported by Fox News.

The Center for Strategic and International Studies, a Washington-based think tank, said in its recent report that “Beijing has undertaken substantial upgrades of its military infrastructure in the Paracels” and particularly started building new facilities on Triton Island.

It was the second such operation conducted by the US during Donald Trump’s presidency. On May 24, the US Navy guided-missile destroyer, the USS Dewey, came within 12 miles of the Mischief Reef in the Spratly Islands – another disputed archipelago that lies in the southern part of the South China Sea.

At that time, the Chinese Defense Ministry also sent two frigates to “warn off” the US vessel and said that it was “firmly opposed to the US behavior of showing force and boosting regional militarization.”

The Paracel Islands are contested by China, Taiwan and Vietnam while the Spratlys are also additionally claimed by the Philippines, Malaysia and Brunei. China claims sovereignty over a large part of the South China Sea, a region crucial for China’s maritime trade.

China has already built runways, aircraft hangars, radar sites and hardened surface-to-air missile shelters on its artificially-created islands in the region, according to photos analyzed by the Washington-based Center for Strategic and International Studies (CSIS).

Beijing’s actions have sparked concerns in Washington and the US Navy, which is fiercely opposed to this Chinese initiative, has deployed additional warships in the disputed zone, conducted maneuvers near China’s artificial islands, and flown over them, claiming it has been done in the interest of the “freedom of navigation.”

In response, China called Washington’s involvement in the dispute the “greatest” threat to the region.

In early June, China and the US both held exercises involving air and navy forces, in another episode of confrontation over the disputed South China Sea. The US sent two B-1B Lancer supersonic bombers to fly a 10-hour mission from Andersen Air Force Base, Guam, which was conducted in conjunction with the US Navy’s Arleigh Burke-class guided-missile destroyer the USS Sterett.

A day earlier, the Chinese People’s Liberation Army (PLA) conducted its own air and navy exercise off Hong Kong. The patrol mission involved three helicopters and two Type 056 corvettes, the Qinzhou and the Huizhou, the Defense Ministry reported.

Jim Dean, managing editor at Veterans today, told RT he believes Washington is getting embroiled in a territorial dispute it has no part in as part of a PR game against China.

“This is a part of a sparring campaign that I think is going to go on for quite a while,” Dean said, adding that the latest incident, which comes on the heels of a US arms deal with Taiwan, is “a part of turning the screws” by the US administration.

“It [territorial dispute] really does not involve the United States, because it’s on the other side of the world, but the US likes to show the flag,” Dean noted, arguing that the US is inflaming tensions there “just to get the publicity that we can do it and we will continue doing it.”

The incident might be also a deliberate move intended to provoke China into deploying more forces in the South China Sea, in order to justify a US response, according to Dean.

“We really have some theater going on with this, and this all is going to go on for some time,” he said.