In it, I recounted how B’nai B’rith Canada launched a defamatory media campaign libeling me as a supposed “holocaust denier,” in connection with my appearance at Quds Day rallies targeted by the terrorist group Jewish Defense League (JDL). When I returned from those rallies to discover that my car no longer had functioning brakes, I naturally wondered whether the JDL did it.

As it turns out, the answer is almost certainly “no.” Some of my brake lines were old and rusty, and they coincidentally happened to start leaking while I was traveling to Chicago and Toronto and speaking at rallies targeted by the JDL.

I know what you’re thinking: “Barrett is a crazy coincidence theorist.” Well, go ahead and call me names, but my rusty old segment of brake line did not show visible signs of sabotage. It looked more like it had just rusted out.

It is always possible that some ultra-sneaky JDL terrorist crawled under my vehicle, found the not-yet-replaced and therefore rusty segment of brake lines, and somehow caused the leak in a manner indistinguishable from rust damage. But I’m not giving them that much credit.

So it looks like I owe the JDL terrorists an apology.

Sorry, JDL terrorists! I can’t imagine why I would ever think you guys were capable of violence. 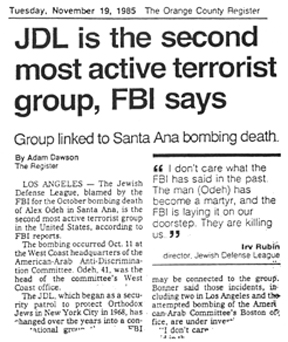 According to the FBI, the JDL has been involved in plotting and executing numerous acts of terrorism within the United States.