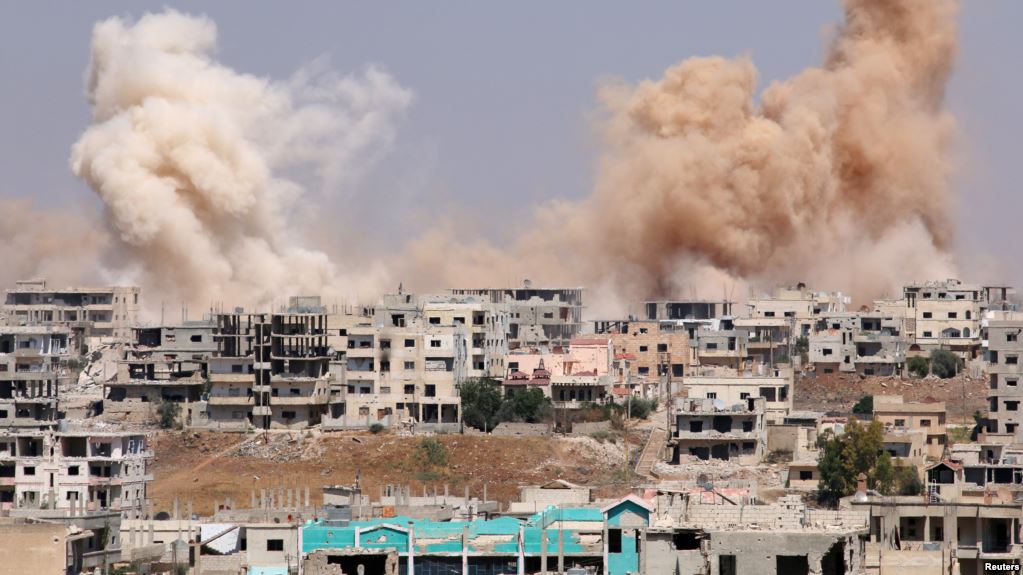 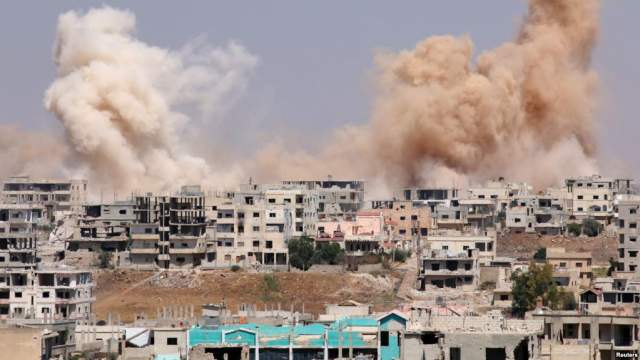 [ Editor’s Note: I must admit I was teased a bit with yesterday’s reporting that Israel was on board the south Syria ceasefire. It made practical sense in that, if the others complied and Israel continued on with its usual “we will attack anywhere, any time, for any reason we choose” foreign policy, it would make them look like fools.

Today it seems that they are so used to accepting that role that they see no reason to change. But this does show the public, with a bright spotlight on it, that Israel does have the power to maintain its rogue nation status, even with Russia, which has not said a peep about Israel’s air strikes on the Syrian Army in the south.

When Moscow was silent, that effectively gave Israel the green light to continue. The danger here is that, no matter what kind of peace deal is finally worked out, if Israel does not like it, then it will undermine the deal to its fullest ability, accompanied by silence from the UN Security council’s big military states.

I hope this is pushing the various publics in those states to start demanding answers as to why the free pass for Israel is so consistently applied. Tel Aviv cannot out bribe the Saudis monetarily, so is it blackmail that is the deep well from which Israeli veto power reigns? Inquiring minds would like to know, with me at the head of the line… Jim W. Dean ]

Israel has refused to abide by a ceasefire brokered by the United States and Russia which went into force in southwestern Syria on Sunday, saying it would act to protect its interests.

“Israel reserves its complete freedom of action, regardless of any understandings or developments,” minister of military affairs Avigdor Liberman said on Sunday.

Russia, the US and Jordan have agreed to back a ceasefire in southwestern Syria and to establish a de-escalation zone in Syrian provinces of Dara’a, Suwayda and Quneitra, which borders the Israeli-occupied Golan Heights. The truce came into force at noon Damascus time (0900 GMT) on Sunday.

The trilateral agreement on cessation of hostilities was announced on Friday after a meeting between Russian President Vladimir Putin and his American counterpart, Donald Trump, on the sidelines of the G20 summit in the German city of Hamburg.

Liberman said Tel Aviv is mulling the understandings reached between Trump and Putin regarding the truce. Israel has cited errant fire to launch several attacks on the Syrian territory, targeting civilians and military positions. Many observers believe militants backed by Israel are behind the fire, giving a pretext to Tel Aviv to attack Syrian military positions.

Prime Minister Benjamin Netanyahu also commented on the ceasefire on Sunday, saying Israel will carefully monitor the developments in Syria, “while strongly upholding our red lines.”

He cited alleged fears of Iranian or Hezbollah presence in Syria, particularly in the Golan Heights. Netanyahu said the truce must not “enable the establishment of a military presence by Iran and its proxies in Syria in general and in southern Syria in particular.”

Syria has been gripped by foreign-backed militancy since March 2011. The Syrian government says Tel Aviv and its Western and regional allies are aiding Takfiri militant groups wreaking havoc in the country. Israel regularly hits positions held by the Syrian army in the Golan Heights, describing the attacks as retaliatory. Syria says the raids aim to help Takfiri militants fighting against government forces.

On several occasions, the Syrian army has confiscated Israeli-made arms and military equipment from terrorists fighting the government forces. There are also reports that Israel has been providing medical treatment to the extremists wounded in Syria.

Last month, United Nations Secretary General Antonio Guterres expressed concerns about a spike in contacts between Israeli armed forces and Syria militants in recent months, saying it could lead to escalation and cause harm to UN observers deployed to the Golan Heights.

The Wall Street Journal recently said Israel has been providing Takfiri terrorists in Syria’s Golan Heights with a steady flow of funds and medical supplies.