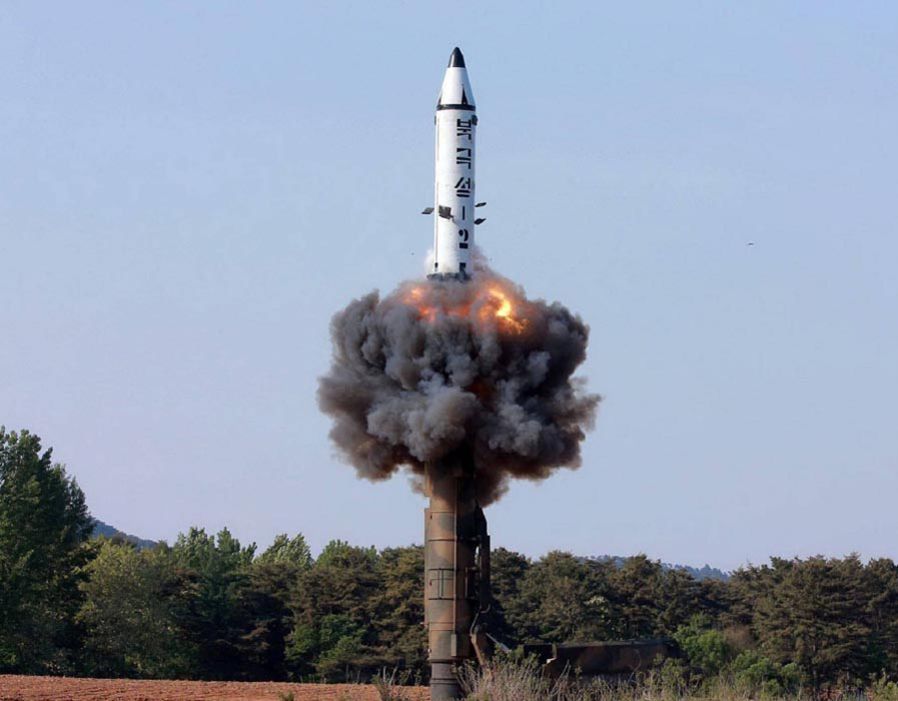 [ Editor’s Note: We smelled a hyped story right away on this alleged ICBM test launch. North Korea had obvious reasons to puff up its deterrent capability, but the US going along with it was just another case of lying to the American people to hype a threat.

So that now makes the story “why was the US doing that?”, and then also why did South Korea spill the beans on the US hype? The real threat here is to North and South Korea. They are the cannon fodder goats, as are the US military there, not mainland USA.

US reasons would be to liquor the public up, where we have more than a few sectors that love conflicts with small countries that are really no threat, or just a minor one, and to keep tensions stirred up that takes focus off other issues which are more important, like the log jam on our domestic politics, where we are funding our government with red ink with not much discussion of the long term consequences of that.

The key issue that South Korean Intel put on the table was the lack of “testing facilities”, which you have to have, in order to see if your hardware works. No one in the “fake news” media was asking this obvious question, nor did they ever ask it during the long term hoax about the Iran nuclear weapons program.

The diversion hustle there was to keep public focus on when Iran would have enough bomb grade material to make “da bomb”, with zero discussion of what their warhead design would be and how were they going to test it. We had the real background on it from our own nuke expert, Clinton Bastin, that the finished reprocessing product was in a “gaseous state”.

Clinton briefed us that you have to have a bomb design to then metallicize the nuke material into the form that you need, and that doing this was not like ordering a milk shake. All the top people in the nuke, military and Intel community were generally aware of this, but all went along with the scam for the same reasons as now – they think it promotes more defense spending, which they are ALWAYS for.

What they never consider is the risk the command structure is taking with its being found out to have massively lied to the American people, thinking they have the right to do it to control public opinion so the good folks can be more easily manipulated. VT readers know where we stand on that question, and why we have always had a 100% corporate media blackout. But, to that end, we have no regrets whatsoever … Jim W. Dean ] North Korea does not appear to have the technology to build intercontinental ballistic missiles (ICBMs) or have testing facilities for them, South Korean intelligence services said, referring to a recent long-range missile test Pyongyang claimed was successful.
–

“Although North Korea claimed that [the missile’s] heat resistance was verified, whether it re-entered [the atmosphere safely] was not confirmed and the country has no relevant test facility, making it look like it has not secured the technology,” South Korea’s National Intelligence Service (NIS) said in a report to the parliamentary intelligence committee, as cited by Yonhap news agency.

The NIS has not been able to confirm that the Hwasong-14 missile test was successful, Yi Wan-young, a member of the South Korean parliament’s intelligence committee, said, as cited by Reuters.

“Considering how North Korea does not have any testing facilities [for re-entry technology], the agency believes [North Korea] has not yet secured that technology,” he said.

The intelligence agency believes that the missile was a modified version of an intermediate-range missile that North Korea tested in May, Yi added. On Tuesday North Korean leader Kim Jong-Un joined a pop music concert devoted to the ICBM test launch.
‘Song of Hwasong Rocket’ and ‘Make Others Envy Us’  were performed at the celebrations, Pyongyang’s official Korean Central News Agency reported, as cited by AP.

Earlier in July, North Korea test-launched a Hwasong-14 missile which it said flew 933km in 39 minutes, reaching an altitude of 2,802km. However, the Russian Ministry of Defense assessed it was an intermediate-range missile (IRBM), saying it flew some 535km and reached an altitude of 510km.

The North Korean missile test was carried out despite a ban by the UN Security Council and once again caused serious concern among the international community.

Pyongyang has been under UN sanctions since 2006, when the Security Council demanded that it cease nuclear testing and banned the provision of large-scale arms, nuclear technology and related training to Pyongyang. North Korea, however, has continued its research and development in the nuclear area. Pyongyang claimed to have successfully tested Pukguksong-2 Hwasong-12 IRBMs in May.

The US also said it had tested an ICBM interceptor missile of its own in May. A Ground-based Midcourse Defense (GMD) interceptor was fired from Vandenberg Air Force Base in California, while the target vehicle, designed to resemble an ICBM, took off from Kwajalein Atoll in the Marshall Islands. The intercept took place above the Pacific Ocean, the US Missile Defense Agency said.