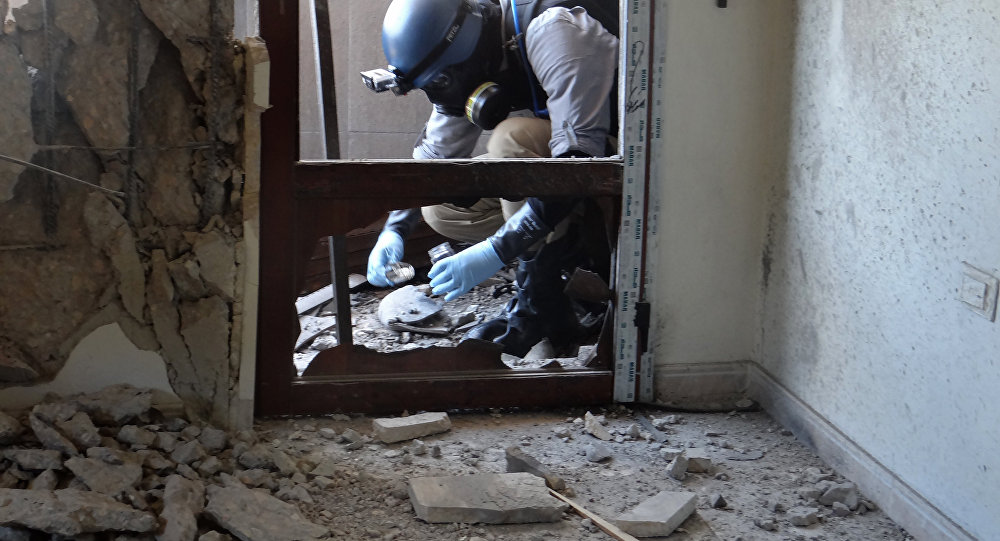 CIA Director Mike Pompeo said that the United States possesses evidence that the Syrian Army was involved in the use of chemical weapons in the Syrian province of Idlib earlier this year.

According to Pompeo, following the chemical incident on April 4 in Khan Sheihoun, President Donald Trump demanded that the truth about what happened be found out. Pompeo said that after Trump’s demand the US intelligence community began to work on the issue and held contacts with US partners.”I told him [Trump] that the intelligence community had concluded that the chemical weapon had indeed been used in the attack and it had been launched by the Syrian regime… I knew that the intelligence community had solid evidence… I said to Mr. President that we have high confidence that this really took place,” Pompeo said Tuesday at a dinner hosted by the Intelligence National Security Alliance.

In an interview with Radio Sputnik, Oleg Glazunov, a military analyst and associate professor of the Sociology and Political Science Department at the Russian Plekhanov Economic University, expressed doubts over Pompeo’s statement.

“They don’t have evidence. This is a double standards policy again. Just remember the situation with Iraq – chemical weapons and the white substance in a jar. Later, it was found out that all of that was falsified. Now, there is a falsification again,” Glazunov said.

The expert stressed that while accusing Damascus of using chemical weapons Washington turns a blind eye to the well-known fact that Daesh terrorists have such weapons.”There was a large chemical laboratory in Mosul. Former specialists of Saddam Hussein’s army and specialists from Europe and the US worked there. They helped Daesh produce chemical weapons. But these facts are ignored. Instead, they make up stories and myths about [Syrian President] Bashar Assad,” Glazunov said.

According to him, CIA operatives are “craftsmen of falsified stories.”

“They’re doing this to change regime in Syria. They would even make a deal with the devil if it was necessary to remove Assad from power,” the expert concluded.

Absurdity or Provocation: What’s Behind US Claims of Chemical Attack Preparation in Syria

On April 4, the National Coalition for Syrian Revolutionary and Opposition Forces supported by the US blamed the Syrian government for an alleged chemical weapon attack in Khan Sheikhoun in Syria’s Idlib province.Reacting to the incident, Washington, which had not presented any proof of the chemical weapons use by Damascus, launched 59 Tomahawk cruise missiles at the Syrian governmental military airfield in Ash Sha’irat on April 6.

Damascus has repeatedly denied any involvement in the incident and said that the Syrian government doesn’t possess chemical weapons as the full destruction of Damascus’ chemical weapons stockpile had been confirmed by the OPCW in January 2016.

In an interview with Sputnik on April 21, President Assad characterized the alleged chemical attack in Khan Sheikhoun as a provocation to justify the US strike on Ash Sha’irat. The Syrian leader also warned of the possibility of the new provocations similar to the one in Khan Sheikhoun.

Last week, the Russian Foreign Ministry said that terrorists in Syria were planning to stage provocations involving chemical weapons in order to justify US strikes on the Syrian Army and its allies.

“According to information available [to us], Syrian terrorist groups plan staged provocative actions with the use of chemical poison gases to justify US strikes against the positions of the Syrian government forces,” Foreign Ministry Spokesperson Maria Zakharova said at a daily press briefing.

She added that Daesh has deployed chemical laboratories and special equipment for creating chemical bombs to Deir ez-Zor from Raqqa.A week earlier, the White House claimed that a new attack involving chemical weapons was in the works by the Syrian government, however, declined to present any evidence. Washington vowed to make Syrian authorities “pay a heavy price” in the case of chemical weapons use.

The Kremlin commented on the White House’s claim and said that it considers the US’ threats against Syrian legitimate leadership to be “unacceptable.” Damascus also denied the information.