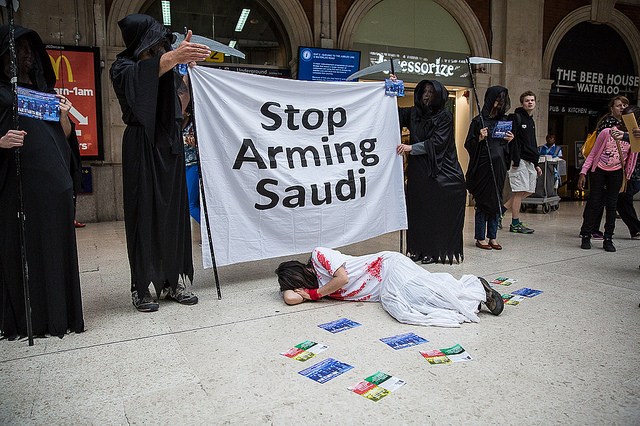 Campaigners are furious with a High Court decision in London allowing the UK Government to carry on exporting arms to Saudi Arabia for use against Yemenis.

The Campaign Against Arms Trade (CAAT) brought the legal action against the Secretary of State for International Trade for continuing to grant export licences for arms to Saudi Arabia, arguing that this was against UK policy, which states that the government must refuse such licences if there’s a clear risk that the arms might be used to commit serious violations of International Humanitarian Law.

It is undeniable that Saudi forces have used UK-supplied weaponry to violate International Humanitarian Law in their war on Yemen. According to the United Nations, well over 10,000 people have been killed, the majority by the Saudi-led bombing campaign which has also destroyed vital infrastructure such as schools and hospitals and contributed to the cholera crisis. 3 million Yemenis have been displaced from their homes and 7 million are on the brink of dying from famine. UNICEF reports that a child is dying in Yemen every ten minutes from preventable causes including starvation and malnourishment.

A crippling naval blockade of the country by the US has been key to the cruel onslaught. The European Parliament and numerous humanitarian NGOs have condemned the Saudi air strikes as unlawful. And 18 months ago a UN Panel of Experts accused Saudi forces of “widespread and systematic” targeting of civilians.

Yet the UK has licensed £3.3 billions worth of arms such as aircraft, helicopters, drones, missiles, grenades, bombs and armoured vehicles to the Saudi regime and refused to suspend the supply of  weaponry for use in Yemen in the face of the horrors perpetrated. It is claimed that the Government has even ignored warnings by senior civil servants and its own arms control experts, and that some records of expressed concern have gone missing.

So who is the UK’s helping hand behind that vile regime’s murderous adventure in the Yemen? Why, it’s none other that senior Israel stooge Dr Liam Fox, now Secretary of State for International Trade and the lead on trade and investment in the defence and security sector. He of course oversees export licensing.  He also has ‘form’ when it comes to thinking silly thoughts and doing stupid things in the foreign affairs arena, and he’s known as a crazed flag-waver for Israel and a sworn enemy of Iran.

While Secretary of State for Defence, Fox told us: “Israel’s enemies are our enemies and this is a battle in which we all stand together or we will all fall divided.”

Fox was forced to resign as Defence Secretary in 2011 following the scandal involving him, his ‘close friend’ Adam Werritty, the UK ambassador to Israel, and Israeli intelligence figures allegedly involved in plotting sanctions against Iran.

The reason for the British government’s hostility towards Iran was spelled out by David Cameron in a speech to the Knesset in 2014: “A nuclear armed Iran is a threat to the whole world not just Israel. And with Israel and all our allies, Britain will ensure that it is never allowed to happen.” That position carries forward into the present day.

And in June 2015 Fox declared: “It is logical to assume that Iran’s intentions are to develop a nuclear weapons capability and any claims that its intentions are exclusively peaceful should not be regarded as credible… Iran’s nuclear intentions cannot be seen outside the context of its support for terror proxies, arguably the defining feature of its foreign policy. The risks are clear.”

What he omitted to say was that Iran’s intentions must also be seen in the context of Israel’s foreign policy, its refusal to sign the Nuclear Non-Proliferation Treaty and the grave threat posed by the Zionist regime’s 200 (or is it 400?) nuclear warheads. Israel hasn’t signed the Biological and Toxin Weapons Convention either, and has signed but not ratified the Comprehensive Nuclear Test-Ban Treaty, likewise the Chemical Weapons Convention. Iran and all the other nations in the region have every right to feel nervous.

As is well known, Israel and Saudi Arabia have formed a cosy alliance. No entities deserve each other more. And Britain will do anything, it seems, to get at Iran through these repulsive ‘friends’.

Instead of dangling from a lamp-post on Tower Bridge, Fox was quickly rehabilitated and re-promoted to senior office by fellow stooges like Theresa May. Just lately prime minister May has accused Iran of working with Hezbollah, interfering in Iraq, sending fighters to Syria to help Assad, and supporting the Houthis in the conflict in Yemen. The British Government, of course, can meddle where it pleases and do dirty weapons deals with the Saudis which, Mrs May assures us, are for the sake of long-term security in the Gulf. “Gulf security is our security,” she says, arguing that the same extremists who plot terror in the Gulf states are also targeting the streets of Europe.

So how did Fox manage to defeat the campaigners in court? After all, as Rosa Curling of Leigh Day (acting for CAAT) said, “The law is clear: where there is a clear risk that UK arms might be used in the commission of serious violations of international law, arm sales cannot go ahead.

“Nothing in the open evidence presented by the UK government to the court suggests this risk does not exist in relation to arms to Saudi Arabia. Indeed, all the evidence we have seen from Yemen suggests the opposite: the risk is very real…. Our government should not be allowing itself to be complicit in the grave violations of law taking place by the Saudi coalition in Yemen.”

Andrew Smith of CAAT said: “If this verdict is upheld then it will be seen as a green light for government to continue arming and supporting brutal dictatorships and human rights abusers like Saudi Arabia that have shown a blatant disregard for international humanitarian law….

“This case has seen an increased scrutiny of the government’s toxic relationship with Saudi Arabia. It is a relationship that more than ever needs to be examined and exposed. For decades the UK has been complicit in the oppression of Saudi people, and now it is complicit in the destruction of Yemen.”

Rachel Sylvester in The Times noted that the judges concluded there was “a substantial body of evidence suggesting that the [Saudi-led] coalition committed serious breaches of international humanitarian law in the course of its engagement in the Yemen conflict”, but the ruling was based on a narrow legal point about whether ministers had followed proper procedures and acted rationally in assessing the risks.

“Whatever the result of the legal process,” she wrote, “it’s time for the government to reconsider Britain’s poisonous relationship with Saudi Arabia, starting with the suspension of arms sales to a country that stands accused of appalling human rights abuses within its own borders as well as the funding of extremism abroad. What is UK foreign policy for if not the promotion of this country’s values around the world?”

And, as she points out, last year the UK committed £85 million to the aid effort in Yemen, making the Department for International Development the fourth largest donor to the crisis.

So, just as we pour £millions of aid into the Palestinian Territories to subsidise the illegal Israeli occupation while at the same time supplying the regime in Tel Aviv with arms to sustain its occupation, we are spending all this taxpayers’ money in Yemen to clean up the mess we’re helping the Saudis to make.

Fox succeeded thanks to ‘closed sessions’. This meant that CAAT and their legal team weren’t allowed to see much of what was presented by the Government, which could only be examined by a security-cleared “special advocate”.

The secret evidence is said to have included Saudi Arabia’s “fast-jet operational reporting data”, “high-resolution MoD-sourced imagery” and “UK defence intelligence reports and battle damage assessments”. The MoD and Foreign Office analysis had “all the hallmarks of a rigorous and robust, multi-layered process of analysis” while the evidence presented by the campaigners was “only part of the picture”. The Court said the secret evidence could not be referred to in open court for reasons of “national security”.

But what has all the MoD’s high-faluting technical tosh to do with justice? Or the basic concept of right and wrong? An especially International Humanitarian Law?

And our national security? Yeah, yeah, yeah. So the slaughter must go on in that distant land…

Labour’s shadow international trade secretary Barry Gardenier suggested in the House of Commons that the “secret” evidence should be made available to MPs for scrutiny “on privy council terms” or handed to the Intelligence and Security Select Committee. Sounds reasonable enough.

Yeah, and so do Yemeni civilians…. from us.

He admitted that “Yemen is indeed a humanitarian disaster” but said it was right to keep selling arms to Saudi Arabia. He may have won the legal point – for now. But he has clearly lost his moral compass, if he ever had one.

As Rachel Sylvester remarks, “So craven is the Whitehall establishment that the government has refused to publish a report on the foreign funding of terrorism, for fear of annoying its Saudi friends.”