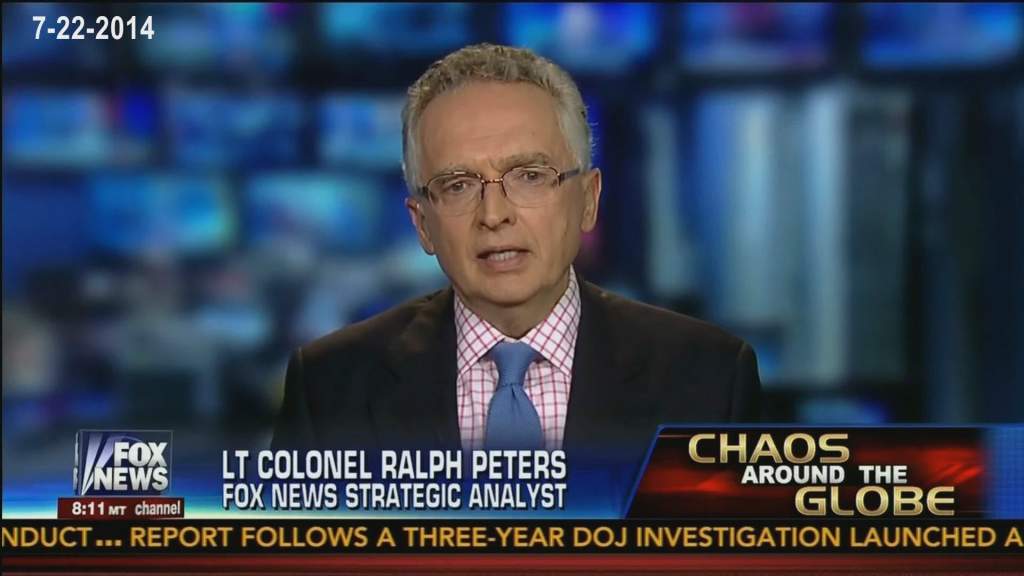 I’ve always told people that if they want to be entertained a little, then they ought to grab some munchies and some nice orange or mango juice, sit down, and just listen to a number of New World Order agents on TV. You probably won’t be able to hold your laughter.

Take for example former retired US Army lieutenant colonel, author, and media commentator Ralph Peters. He has recently declared on Fox News that Vladimir Putin “is as bad as Hitler”! Perhaps Tucker Carlson should have brought a copy of Harry G. Frankfurt’s book with him and give it to Mr. Peters.[1]

Vladimir Putin, Peters says, “hates America. He hates us.” Putin, he continues, “isn’t fighting ISIS. He is fighting the anti-Assad people, while letting us fight ISIS.” Peters isn’t that dumb. But he is living in a fantasy world which does not allow him to string two coherent thoughts together. Sometimes I feel sorry for those people.

Peters wrote an entire book in 2006 defending the surge in Iraq.[2] By March of same year, serious thinkers realized that Iraq was a total disaster. Peters risibly wrote an article in the New York Post entitled, “Dude, Where’s My Civil War,” in which he stated:

“The Iraqi Army has confounded its Western critics, performing extremely well last week. And the people trust their new army to an encouraging degree.”[3]

Those who believe that Iraq was a failure, said Peters, were “irresponsible journalists.”[4] Five months later, Peters seemed to have choked on his own words by saying that the “civil war is closer than it was…The leaders squabble, the death squads rule the neighborhoods.” By November of the same year, Peters was even more pessimistic:

“Iraq is failing. No honest observer can conclude otherwise. Even six months ago, there was hope. Now the chances for a democratic, unified Iraq are dwindling fast (…) Iraq could have turned out differently. It didn’t. And we must be honest about it.

“We owe that much to our troops. They don’t face the mere forfeiture of a few congressional seats but the loss of their lives. Our military is now being employed for political purposes. It’s unworthy of our nation.”

“The notion of sending more U.S. troops is strategic and practical nonsense. Had the same voices demanded another 100,000-plus troops in 2003 or even 2004, it would have made a profound, positive difference. Now it’s too late.”

Now Peters is arguing that Putin is evil. He is also advocating for regime change in Syria. He thinks that the American people don’t know about his history. He is just an apologist for the Israeli regime and the Neoconservatives in America. Plain and simple. In fact, he has promiscuously argued that “anti-Israel” is “anti-Semitism.”

The sad part is that people like Peters don’t want to admit that the most Americans aren’t buying fake news anymore. People are tired of politicians who are actually perpetuating categorical lies, fabrications, and hoaxes. Perhaps Peters and his circles need to stop being marionettes for the Israeli regime and the warmongers.