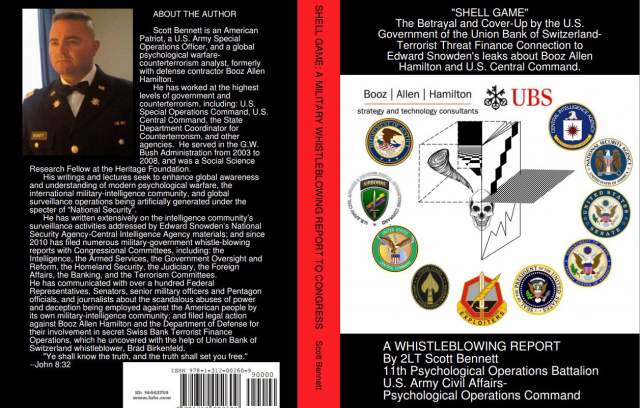 Through a very strange set of changing circumstances, Scott Bennett was moved during his six-month imprisonment.

Scott ended up being in the cell next to Brad Birkenfeld, who was one of the chief executives for Swiss bank UBS that laundered money to terrorist groups.

Brad Birkenfeld had been jailed to discredit him so that his testimony would not be accepted in court and implicate his superiors and associates.

Brad Birkenfeld made arrangements to provide Scott with key “smoking gun” documents that illustrated how terror was financed covertly by the USG through this large Swiss bank.

Scott Bennett is a total stand up man who took his oath seriously to defend the USA against all enemies, both foreign and DOMESTIC.

Scott has never given up in his mandated mission to discover and expose the source of terror financing and do everything possible to help stop it.

Upon release, Scott tried to contact every member of Congress. He had provided each with a book he authored entitled, Shell Game, which contained these “smoking gun” documents. The only Member of Congress who got back to Scott was Representative Rand Paul.

Thus, it is rational to conclude that the US Congress has no desire to eliminate terror financing or to actually win their supposed “War on Terror”.

Sadly, it certainly appears like this so-called “War on Terror” is like every other phony USG war (War on Poverty, War on Hunger, War on Crime, etc.). These wars are phony cover stories used to create more of the serious problems they were supposedly designed to eliminate.

This is designed to increase funding for the USG, the US Military, Intel and LE like any previous real war effort. As remarkably well-documented in the Michael Rivero movie, “All wars are Bankers’ Wars”, we now know that the BT/RKM/COL Banksters work all sides to make more profits for themselves and their associated families that own big blocks of stock in the large defense contractors.

In the following documentary, terror financing is exposed for exactly what it is. If you have the time to watch this, great. If not, it is important to note that we now have smoking gun evidence that ISIS et al. is a paid mercenary army financed by the USG and other governments.

Some Intel experts believe ISIS et al. is a fusion of and an extension of the CIA’s Mujahedin and Gladio C. Its apparent purpose is to eventually destabilize and Balkanize every Mideast nation except Israel. Why?

Because Israel has been chosen by the *BT/RKM/COL Banksters to be their main action agent to establish their long desired Globalist NWO plan. This secret plan requires the creation of “Greater Israel” as the final step toward establishing their one-world government run by them.

When Scott did his job too effectively and discovered that certain powerful factions inside the Pentagon and American Intel were actually financing terror through a Swiss bank, he began blowing the whistle. He was then immediately and illegally jailed on a non-existent, phony charge to keep him quiet. Despite being thus persecuted, Scott did not back off. Through a stroke of providence, he ended up being given smoking-gun documents from Brad Birkenfeld and quickly published these in book form.

Scott disseminated this excellent book to every sitting member of the US Congress (only one responded – Congressman Rand Paul). And Scott Bennett continues to disseminate this truth to anyone who will listen, has his own radio program, and appears as a regular guest on another one, The Truth Versus the News. Scott has also appeared more than once on Mike Harris’ VT Radio Program, The Short End of the Stick.

VT has its own group of hard core, heavy duty Intel Cowboys who are heroes. Some actually carry the highest military ranks available, but display a lessor rank or none at all. And four of VT’s best (Chairman Gordon Duff, Managing Editor Jim Dean, and Directors Colonel Jim Hanke and Mike Harris) attended the International Conference to Combat Religious Extremism and Terrorism in Damascus in December 2014 and played a major role in exposing the true source of ISIS et al. (which just happens to be the world’s largest organized crime syndicate). The participation of these VT Directors in this ground-breaking conference helped prevent a full scale ICBM-based nuclear WWIII over Syria and Iran.

Scott Bennett is unique because he was regular Army Intel, Psychological Operations, a man who by his own hard work, intelligence and diligence rose up into a position assigned to high level investigations of terror financing. His dissemination of the information he discovered was not classified and has helped prevent a Nuclear WWIII, also. Like VT’s Intel Cowboys, Scott Bennett is a great American Hero and a fearless truth warrior.