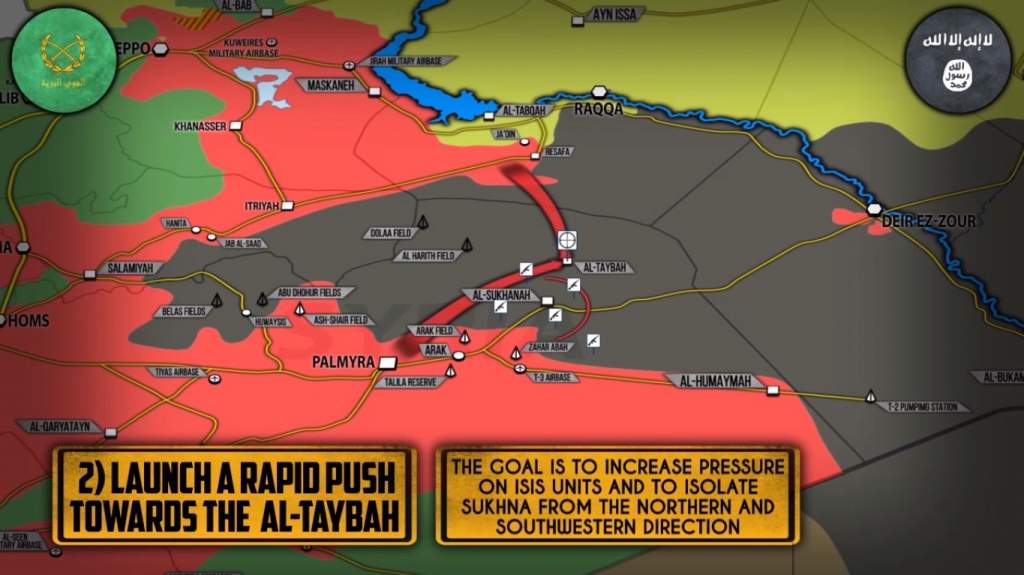 On Thursday, the Syrian Arab Army Tiger Forces and tribal forces, backed up by the Russian Aerospace Forces, have launched a military operation against in the southwestern part of Raqqah province. Initially, pro-government troops advanced south of Resafa and liberated Bir al Zenati, Bir Itaw and Bir Hiwaran villages. On Friday, they captured Ridgem-Abe el-Kalat Hills and deployed in a striking distance from the Dubaysan oil field and the Bir al-Zamlah crossroad.

According to pro-government sources, the ongoing anti-ISIS operation involves about 6,500 fighters from Raqqah tribes loyal to the Syrian government. However, this number cannot be confirmed independently.

When the Tiger Forces and their allies secure the Bir al-Zamlah crossroad, they will have 3 options:

1. To develop momentum southwest of Resafa, capturing oil fields in the area, steadily recapturing the ISIS-held area south of the Ithriyah-Resafa road. The goal of this advance is to secure the western flank of the military grouping that will push to the ISIS-held town of Sukhna from the Resafa direction.

2. To launch a rapid push towards the ISIS-held town of Taybah north of Sukhna. The goal of this move is to increase pressure on ISIS units in the eastern Palmyra countryside and to attempt to isolate Sukhna from the northern and southwestern direction.

In any case, the government advance in southern Raqqah will also lead to intensification of clashes between the army and terrorists east of Salamiyah. If government forces capture the whole Resafa-Palmyra road, ISIS units remaining west of the road will be cut off from supplies and reinforcements from Deir Ezzor province and the Iraqi border area.
Meanwhile, government forces made notable gains in the southern desert, recapturing Abu Khashbah, al Ghudaht, at Tayyar and Ard Umm ar Rumum and deploying closer to the full encirclement of the area formally controlled by US-backed militants. Clearing this pocket, the Syrian command is seeking to shorten the frontline in southern Syria in order to free additional forces for operations against ISIS.

Next 7-10 days will be very important for the army and show if the Iranian-Syrian-Russian alliance is able to achieve their key goals, including the lifting siege from Deir Ezzor, on the Syrian battleground before US-backed forces capture the city of Raqqah.