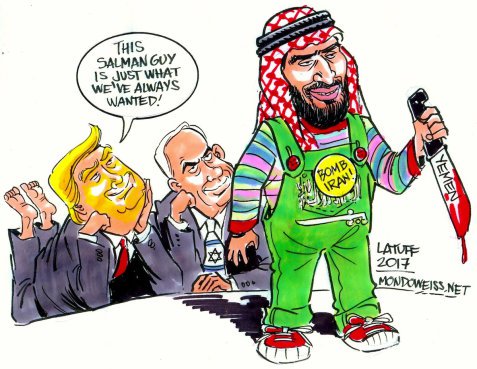 Why are the Saudi-led GCC countries REALLY ganging up on Qatar?

In my recent debate with Frederick Peterson on Press TV (watch it above) I suggested that it’s really about Israel. Bibi Netanyahu doesn’t like Qatar supporting Palestine, so he has pressured his stooges in Riyad, Cairo, and Abu Dhabi (not to mention Washington DC) to put pressure on Doha.

Peterson was horrified by my interpretation, warning that it could lead to global nuclear war. His unspoken implication was that the truth, too boldly spoken, could push the Zionist regime to lash out by inciting a regional war or even exercising its Samson Option. The safer alternative, then, is to use mealymouthed “diplomatic” language to obscure the real nature of the battle between the Zionist-imperialist forces (Israel, al-Sisi’s Zionist-occupied Egypt, and the GCC) and their relatively independent adversaries (Iran, Turkey, and Qatar, in order of relative independence).

Who will win this battle?

The GCC countries, by contrast, are all comprador regimes standing in for Western imperial interests. They are brutal, thuggish dictatorships infested by backwards, authoritarian, sycophantic, obscurantist versions of Wahhabi Islam. Their partner, al-Sisi’s Egypt, is by far the worst human rights abuser in the region, having slaughtered thousands of peaceful demonstrators and brutally repressed supporters of the legitimate, democratically-elected government of Mohamed Morsi. These regimes are pure thug-ocracies. They are the Middle East’s version of Orwell’s boot stamping on a human face forever.

In the long run, the future belongs to the de facto anti-GCC alliance of Iran, Turkey, Qatar, Palestine, and their distant supporters in Russia and China. The dinosaur dictatorships in Riyadh, Tel Aviv, Cairo, and Abu Dhabi cannot continue to loot the Middle East and oppress the people of the region forever.