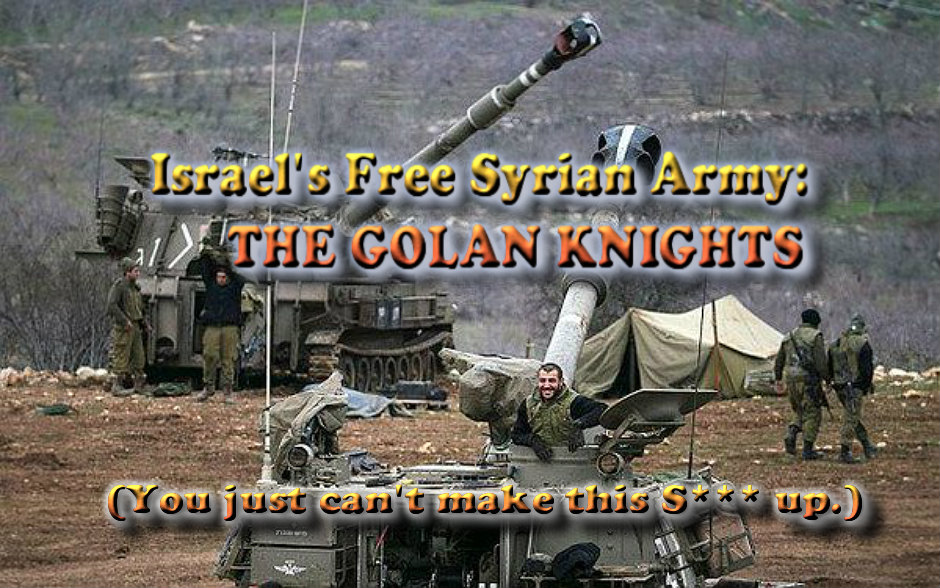 [ Editor’s note: Phil Butler reminds us of the vast oil and gas riches at stake in the Golan Heights, and how the West and the Rothschild groupies simply will not be denied claiming Golan as their territory. He also brings to our attention the Golan Knights, operating in the Golan Heights – a wordplay that might be too good for Hollywood producers to miss… ]

“An error doesn’t become a mistake until you refuse to correct it” – John F. Kennedy quoting Orlando Battista

Europe has been content to blame its current societal and economic decline on malfeasant leaders like EU Jean-Claude Juncker, German Chancellor Angela Merkel, or France’s ex-president François Hollande. If the people of Europe only knew the real actors behind, Israel would not be unscathed in this whole Arab Spring charade. Yes, Europe has the Israelis to thank for sapping what’s left of the EU’s strength. Here’s a story you won’t read in the New York Times, but one the Wall Street Journal will hint at.

This morning I was astonished to find a Wall Street Journal story that framed Israel’s support for Syrian insurgents against the government of President Bashar Hafez al-Assad.

In a strange twist of the fates, by reporters Rory Jones in Tel Aviv, Noam Raydan in Beirut and Suha Ma’ayeh in Amman, Jordan, the newspaper owned by Genie Oil investor billionaire Rupert Murdoch suddenly decided to spill some of the beans on Israel’s role in the Syria. The WSJ story is but one of the recent revelations hinting at how Israel played a key role in the conflict that has destroyed Syria, and which has flooded Europe with refugees and potential terrorists.

The lead from the WSJ is telling:

“Israel has been regularly supplying Syrian rebels near its border with cash as well as food, fuel and medical supplies for years, a secret engagement in the enemy country’s civil war aimed at carving out a buffer zone populated by friendly forces.”

But Murdoch’s newspaper only skims the surface on the Israeli operations directly relating to the war to unseat Assad no matter what. For months I’ve asked the question, “How could the Arab nations’ most hated foe keep from being bloodied by ISIL?” Some of the answers now emerge. This story1 from Syria Deeply was probably sourced from the same informants that the WSJ used. Its intro paragraph points to a bigger story.

“Over the past five years, Israel has been quietly working to establish a foothold in southern Syria to prevent Syrian government-backed forces from controlling the area and to bolster its claim over the Golan Heights.”

There’s some clear reasons the older Syria Deeply story (June 15th versus June 17th for the WSJ version) is different from the new WSJ one. First and foremost, Israel’s claims over the Golan Heights link Rupert Murdoch and several other prominent western figures to the conflict in Syria via Genie Energy. While it’s no secret the whole Arab Spring upheaval was in part over pipelines and energy wars, the carving up of Syria for select interests has been a lesser known fact.

On Genie Energy, the reader may be interested to know Genie Oil and Gas (GOGAS) found substantial oil and shale reserves in the Golan Heights. This border region is now seems to be associated with more US and British billionaires and power brokers than any stretch of land east of Manhattan. From dumped Donald Trump security adviser James Woolsey to the homicidal maniac former US VP Dick Cheney, the Genie machinates are in our face trying to profit from Syria’s destruction.

By October 2015, Genie Energy Ltd.’s chief geologists assured investors that major oil reservoir were indeed in the Golan, and then in early 2016 Israel’s Prime Minister Benjamin Netanyahu began losing his mind over the deals the US, Russia and the rest of the West were discussing settlement of the Golan affair as being “Syrian land”. If you’re wondering if Netanyahu has a stake in the western oligarch play for energy in Syrian territory, his later statements were also telling:

“The Golan will always remain in Israel’s hands. Israel will never withdraw from the Golan Heights.”

Fast forward to this presidency and Donald Trump’s kinship with Netanyahu and Israel. Political analyst Anthony Bellchambers encapsulated what a Trump presidency means for Golan and for Syria overall. He wrote for Global Research2 on what a Trump White House means:

“It would almost certainly embolden Israel to unilaterally annex the occupied Palestinian West Bank, East Jerusalem, and the Syrian Golan Heights in gross violation of international law and in contempt of the United Nations…It would increase the likelihood of a global war between the US and Russia, and their respective allies…”

Returning to the Israeli real and logistical support for insurgents inside Syria, this recent UNDOF report spoke of “a significant increase in interaction” in between the IDF and the opposition to Assad across the alpha-beta fence in between Golan and Syria proper. The report speaks of both “personnel and supplies being observed to have been transferred in both directions.”

Instances of the Israelis treating “moderate jihadist wounds”, as well as government-organized aid entities trucking in medical aid, food and clothing are well documented (US News & World Report from 20153); but what’s not so publicized are the funding and support for Israel’s own Free Syrian Army faction, known as the Golan Knights (Liwa Forsan al Joulan) made up of between 300 and 1000 fighters.

On the wider scale, the Israelis have also been promoting the National Salvation Front leader Fahad al Masri, who has publicly called for Israeli intervention in Syria. All of this activity exactly mirrors what the Israelis did in Lebanon back in the early 1970’s to the mid 2000’s.

Once ISIL reared its ugly head to further the effort to unseat Assad, Israeli officials began expanding Israeli settlements in Golan, as well as infrastructure projects there.

Where funding of ISIL is concerned, the Russian air forces bombing black market oil headed from ISIL-held territory to Israeli ports was well documented by me and many others.

Direct contact in between anti-Assad insurgents, Israel’s military and leadership, and US Senator John McCain has also been documented by Global Research founder, Professor Michel Chossudovsky and others.

Finally, the underneath support from Israel to anyone opposing the Assad government was made clear by me on my personal blog some months back. Supported by reports from other sources, this was my conclusion on the Israel role in all this back in September of 2015, when the Russia air campaign was about to go into full swing. Israel is set to benefit from Assad’s downfall accordingly:

“With Assad gone, and with US duplicity in these matters, Israel would become the ultimate powerhouse of stability in this region. Her enemies dispersed like wandering nomads, the Jewish state could go ahead and eradicate the Palestinians, expand her territories uninhibited, and dictate policy for the whole region. That is, with Washington’s say so.”

Back then the Jerusalem Post4 revealed most of Israel’s oil actually came from Kurdistan, so my theories were not unsupported by evidence of Israel’s role. Looking at the situation today, one nation has benefitted more than any other since the onset of what became known as “Arab Spring”.

Gabriel Scheinmann, Ph.D. candidate in international relations at Georgetown University, wrote a piece evidencing just such a win. “The Real Big Winner of the Arab Spring” reflects on what I would call “the subterfuge the Israeli lobby inserted” into think tank mentalities from the start, that somehow Israel lost from this upheaval in the Arab world. The article also reveals a more logical reality.

“There is good reason to think, however, that this assessment is largely incorrect. In fact, the changes wrought by the Arab Spring are likely to be of long-term benefit to Israel. Its most dedicated enemies, especially the Iran-led “Axis of Resistance,” have been seriously weakened, both economically and militarily. The Arab states, hostile and otherwise, will be unable to directly challenge Israel for a long time. “

Israel, surrounded by enemies, is one of a handful of neighboring states that have been totally unscathed by these wars and revolutions. Meanwhile, millions of refugees flood Europe. Terror spreads to the rest of the world. And bankers line up in anticipation of additional military spending, trillions in reconstruction costs in Syria and elsewhere, and the economic loans half a hundred nations will soon need.

The EU is sinking under austerity and added pressure from this crisis, and somehow nobody looks at who is benefitting? If there is any real justice in the world, then Israel’s role in all these conflicts will be revealed.