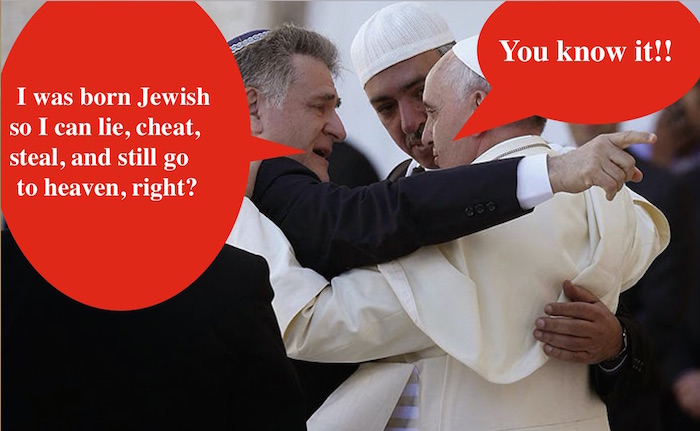 We have been discussing the tricky concept of “Fake News” quite a bit on False Flag Weekly News…most recently, during the first segment of this week’s show.

So here is a Fake News Intelligence Test. Below is a story I came across on the internet. Is it fake news? Why or why not? Your answers in the comments section will be graded. 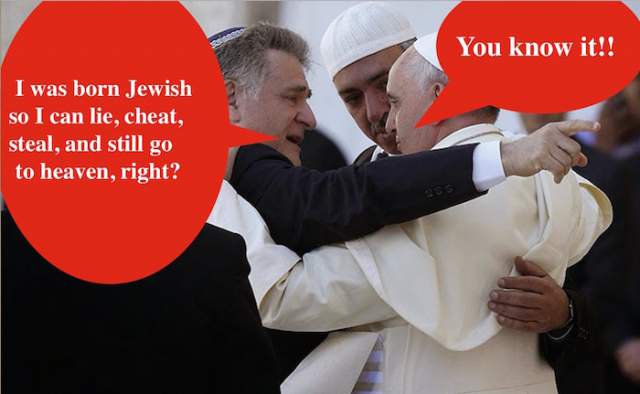 An Open Letter to Pope Francis, by the converted Jew Pinchus Feinstein

I am a Jew. I have the assurance, as did Menachem Mendel Schneerson of Crown Heights, Brooklyn, of direct descent from King David on my father’s side (my mother, I was assured was descended of Hillel).

I am 74-years-old. I converted to the Roman Catholic Church at the age of 17 in the last year of the pontificate of Pope Pius XII. I did so because I was under the conviction that I had to accept and have faith that Jesus Christ was my savior, and I believed it. And I believed that I had to be a baptized member of his Church to have a chance of salvation. So I converted and was baptized in the Catholic Church, and then I was confirmed.

Over the years I have contributed tens of thousands of dollars to both Peters’ Pence (the pope’s own treasury about which you of course must be very familiar), and my local parish and diocese.

Now in 2015 and 2016 I have read your words and those of your “Pontifical Commission.” You now teach that because I am a racial Jew, God’s covenant with me was never broken, and cannot be broken. You don’t qualify that teaching by specifying anything I might do that would threaten the Covenant, which you say God has with me because I am a Jew. You teach that it’s an unbreakable Covenant. You don’t even say that it depends on me being a good person. Logically speaking, if God’s Covenant with me is unbreakable, then a racial Jew such as I am can do anything he wants and God will still maintain a Covenant with me and I will go to heaven.

Your Pontifical Commission wrote last December, “The Catholic Church neither conducts nor supports any specific institutional mission work directed towards Jews…it does not in any way follow that the Jews are excluded from God’s salvation because they do not believe in Jesus Christ as the Messiah of Israel and the Son of God.”

You are the Pontiff. I believe what your Commission teaches under your banner and in your name, and what you declared during your visit to the synagogue in January. As a result, I no longer see any point in getting up every Sunday morning to go to Mass, say rosaries, or attend the Rite of Reconciliation on Saturday afternoon. All of those acts are superfluous for me. Predicated on your teaching, I now know that due to my special racial superiority in God’s eyes, I don’t need any of it.

I don’t see any reason now as to why I was baptized in 1958. There was no need for me to be baptized. I no longer see why there was a need for Jesus to come to earth either, or preach to the Jewish children of Abraham of his day. As you state, they were already saved as a result of their racial descent from the Biblical patriarchs. What would they need him for?

In light of what you and your Pontifical Commission have taught me, it appears that the New Testament is a fraud, at least as it applies to Jews. All of those preachings and disputations to the Jews were for no purpose. Jesus had to know this, yet he persisted in causing a lot of trouble for the Jews by insisting they had to be born again, they had to believe he was their Messiah, they had to stop following their traditions of men, and that they couldn’t get to heaven unless they believed that he was the Son of God.

Your holiness, you and your Commission have instructed me in the true path to my salvation: my race. It’s all I need and all I have ever needed. God has a covenant with my genes. It’s my genes that save me. My eyes are open now.

Consequently, you will be hearing from my lawyer. I am filing suit against the papacy and the Roman Catholic Church. I want my money back, with interest, and I am seeking compensatory and punitive damages for the psychological harm your Church caused me, by making me think I needed something besides my own exalted racial identity, in order to go to heaven after I die.

I am litigating as well over the time that I wasted that I could have spent working in my business, instead of squandering it worshipping a Jesus that your Church now says I don’t need to believe in for my salvation. Your prelates and clerics told me something very different in 1958. I’ve been robbed!

P.S. I’m transmitting this letter to Hoffman, an ex-AP reporter from New York, in the expectation that he will bring it to the attention of those who should know about it. I am transmitting it to him in the form of a dream, but nevertheless, it represents the feelings of many victims of your robber Church.—Pinch