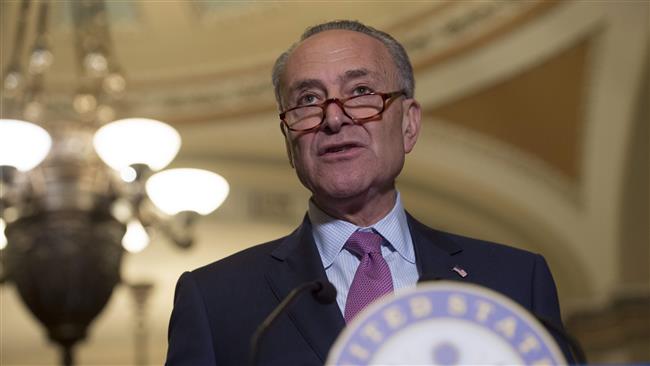 “It would be one of the greatest, greatest breaking of rule of law, of traditional democratic norms of what our democracy is about,” the New York senator said on ABC’s This Week. “It would cause a cataclysm in Washington.”

Schumer also said he cannot imagine his Republican colleagues “just standing by” if the president was to pardon himself or any of his aides who are under investigation. Trump tweeted Saturday that “all agree the US President has the complete power to pardon.”

President Trump and his inner circle are facing congressional and independent investigations for possible collusion with Russia in its alleged meddling in the 2016 presidential election.

The Justice Department appointed Mueller as special counsel in May, following Trump’s surprise firing of James Comey as FBI director, who was then leading the probe.

The US intelligence community has concluded that Russia tried to help Trump to power. Moscow strongly rejects the allegation and Trump calls the probe a “witch hunt.”

The president is getting increasingly impatient with the investigation. Trump’s lawyers and aides are investigating Mueller and his team, looking for conflicts of interest they could use to discredit the probe, according to The New York Times.

Mueller is also examining a broad range of transactions involving Trump’s family businesses as well as those of his associates, including his son-in-law and adviser Jared Kushner.

In a recent interview with the Times, Trump said that Mueller would be crossing a “red line” if he expanded the probe to his family business.

The president floated the idea of pardoning people after it was reported that Attorney General Jeff Sessions met the Russian ambassador to Washington during the 2016 presidential race and discussed the Trump campaign.

Ambassador Sergey Kislyak told his superiors in Moscow that he discussed campaign-related matters with Sessions, contrary to public assertions by the attorney general, The Washington Post reported Friday, citing current and former US officials.

Kislyak’s conversations with Sessions, who was then a senator from Alabama and a foreign policy adviser to Trump, were intercepted by US spy agencies.

A sitting president may have constitutional power to grant pardons, but Trump’s legal advisers claim that is not on the agenda.

“We’re not researching the issue because the issue of pardons is not on the table,” Jay Sekulow, one of Trump’s attorneys, said on ABC. “There’s nothing to pardon from.”