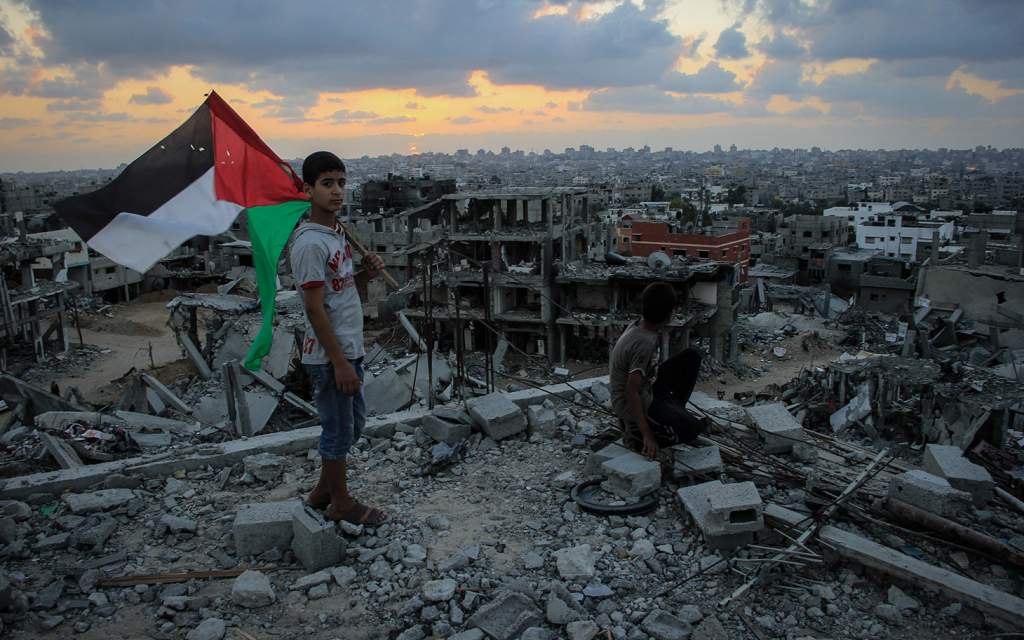 Every Palestinian I met on my visits to the Holy Land urged me to tell their story when I got home. Some have written to me with very moving accounts of misery and excruciating hardship under Israel’s brutal occupation, reinforcing the appalling truths I’d seen for myself.

Two years ago a young woman, a war-weary mom of three in a Gaza refugee camp, wrote to tell me that schools in Gaza were working in 2 or 3 shifts a day “especially in areas where displaced people of the last war still shelter in UNRWA schools — they don’t have any other place to go.”

She also said it’s “difficult for us to live or to leave” and “We just dream of leading a decent life.”

Let’s call her Amal, which means Hope in Arabic. The pseudonym is her idea. She has a university degree and her English is remarkably good. Palestinians, especially the ladies, are very keen on education and determined to pursue it as best they can. Her message powerfully described her little family’s situation in the aftermath of Israel’s 7-week genocidal assault (Operation Protective Edge) the previous year which killed 2,250, mostly civilians, did massive damage to homes and infrastructure, and brought Gaza almost to its knees. She told how she and her neighbours were overwhelmed by death, destruction, grief and chronic deprivation.

I relayed her words in an article titled How on earth do they survive in that ‘hell called Gaza’? in May 2014.

Amal’s latest email is again in three instalments because of severe power disruption and internet transmission problems. She tells me to edit or re-write as I think fit, but I’ve hardly touched it. Only a word here and there has been changed for clarity.

“I have nothing new to tell you about except that things are getting a lot worse, so it is frustrating. My grandmother passed away a few months ago and that left me depressed. She was so dear and pretty. She was the last member of my family who witnessed Al-Nakba (1948 Palestinian ‘catastrophe’) and used to tell us stories about how they were happy there, living peacefully in their homeland, and how they fled or were expelled from their homes.

“She told us about massacres, the destruction of Arab villages, years of displacement and oppression, and how we became refugees as a result; and how what is called Israel state was declared. My grandmother told us stories like a bazaar of bad dreams about losing everything, and how the members of each family were displaced into the refugee camps in Palestine, refugee camps in the Gaza Strip and West Bank, refugee camps in Jordan, Syria and Lebanon, and in other parts of the earth, enduring the worst kinds of pain, discrimination and suffering but with hope and faith that we will return one day.

“In the aftermath of the hostilities of June 1967 and the Israeli occupation of the West Bank and the Gaza Strip, more refugee camps are established to include new waves of displaced persons. My grandmother is not here to tell us more stories; however, I can’t forget. I’m a refugee by origin and I still live in a refugee camp that lacks adequate facilities and services.

“People in the refugee camps keeps good social relationships but endure extreme poverty, frustration and insecurity. UNRWA barely takes the responsibility to provide the basic services of education, health and social services. May your soul rest in peace, my grandmother, in a place where you no longer suffer the injustice of being a Palestinian from Gaza.

Punished by the Palestinian Authority, their own people

“In the besieged enclave of the Gaza Strip you don’t know where to begin when talking about humanitarian crises. Electricity is still a luxury and we receive up to two hours in 24 hours as a recent agreement between the Palestinian Authority and Israel reduces Gaza’s electricity by another 40 percent. It is one of several punitive measures by the Palestinian Authority in West Bank against Hamas de facto government in Gaza. These measures included a 30% cut in the wages of employees of public sector in Gaza, which means that more households are falling under the poverty line.

“Due to the horrible rates of poverty and unemployment an employee has to provide for his own family and some of his relatives’ households as well. Those employees were told by the PA to stop attending their workplaces following the military coup in 2007 and they stay at home with severe social and psychological strains. Some of them committed suicides or crimes.

“Another punitive measure includes the very poor families which benefit from the social safety net as thousands of them have their humble benefits cut. The worst one is the cutting of medical supplies and medications, threatening the lives of thousands of persons who suffer serious illnesses. The referral system to West Bank hospitals is cancelled too.

“The acute shortage in power has become a water catastrophe as it affects the availability of water for household use, with supply being dangerously low resulting in even poorer quality of water. The inability to treat the wastewater in Gaza due to the lack of electricity is threatening to contaminate the water supplies. The pumping of untreated wastewater into the sea poses a major risk of environmental and health hazards and deprives people of the only entertainment place. Fuel reserves for hospital generators will run out soon with obvious threats to the wellbeing of patients.

“Weather is unexceptionally hot this summer which increases the suffering of people whose utmost wish becomes to drink cold water or to run the fan. It is really a dilemma!

Hamas chiefs living it up

“The Rafah crossing [to Egypt] is closed. It has been opened for very few days only in 2017. More than 30,000 persons are registered to get out Gaza for critical reasons. Those who have no pressing reasons to get out Gaza may include me and the rest of Gaza’s residents. It is like a joke – I don’t own a passport as I can’t dream to use it.

“Egypt uses the military instability in Sinai as an excuse for not opening the crossing. I really can’t describe in words the suffering of people who need to leave Gaza for medical treatment and educational scholarship abroad, and people with residential and business or professional dealings. You can simply imagine yourself as a prisoner.

“I don’t mean to disturb you with all this amount of bad circumstances with no prospect of detente or even easing of strains. I don’t know how much we can really bear this. The most important thing which we all think about is why the Hamas regime is determined to stick to governing this poor, desperate place called Gaza.

“It’s simply because Hamas members are leading luxurious life in Gaza. They own money and power to solve their problems. They live in palaces, drive 4×4 vehicles, have their electricity generators and free fuel to run them, got jobs for themselves and their wives and sons, run their own businesses and collect as much as taxes for themselves. They implement an external agenda and receive support from several countries, mainly Qatar and Iran.

“On the other side, President Abbas in the West Bank punishes only Gazan people and his measures don’t hit the internal or external interests of Hamas. Also, Egypt punishes our people by closing the borders. The international community doesn’t care, especially in view of the many other hot-spots in the Middle East that attract attention and support. In such a context, holding out hope (Amal) that conditions will improve is against all logic. It is the same like holding out hope of returning to Historic Palestine.”

So hope is dwindling for Amal and her family, and for all the others trapped in Gaza with nowhere to run and no means to escape. They can only pray the almost daily Israeli air-strikes miss them as they await with dread the next major blitz, which will surely reduce Gaza to an uninhabitable ruin.