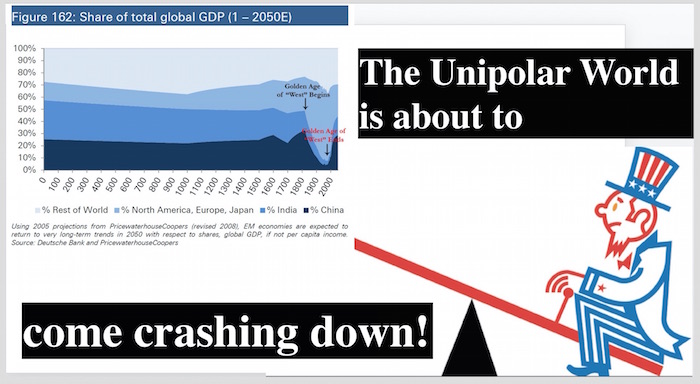 Was this the week the Unipolar World Order ended?

According to Haaretz, Trump officially handed over Syria to Russia and Iran. Tehran is getting a naval base in Syria. A top US Special Operations General says the Russian military can force the US out of Syria.

And it isn’t just Syria that’s going multipolar. Iraq is also bringing in the Russian and Iranian militaries. And China is also moving into the Middle East. That’s a nice  “New American Century” mess you’ve gotten us into, Wolfowitz!

That 9/11 New Pearl Harbor thing must have seemed like a great idea at the time.

How will the Unipolar World Warriors respond? This week they skirmished with Chinese jets over the Yellow Sea, fired warning shots at an Iranian ship in the Persian Gulf, and announced that military action against North Korea will begin in “a few months.”

Meanwhile Israel is going all out to keep the world in general, and the Middle East in particular, in a state of terminal chaos…and making a killing off it by stealing organs from corpses and selling them on the black market, among their myriad other scams. Somehow 9/11 worked out well for them, not so well for anyone else. Like the world wars. Pure coincidence, of course.

It’s a wild and crazy world out there. And the best way to keep up with events is to spend one measly hour per week watching False Flag Weekly News. Enjoy it while it’s still legal!