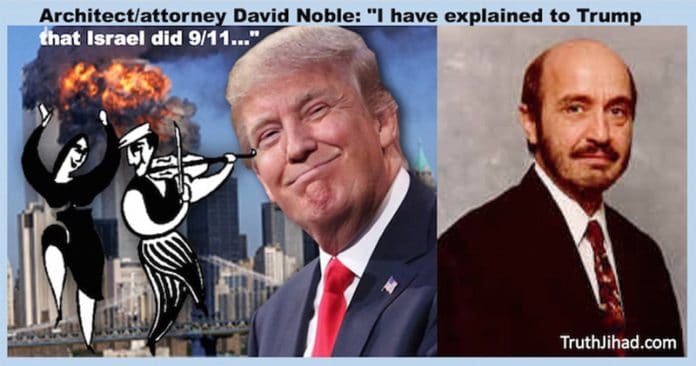 David Noble is an attorney – and a retired architect who belongs to Architects and Engineers for 9/11 Truth. He is also a notable member of the Republican Party of Orange County, California.

In this interview, David Noble discusses his series of letters to President Donald Trump concerning the events of September 11th, 2001. In those letters, Noble lays out the evidence that 9/11 was a neocon-Zionist coup d’etat executed primarily on behalf of the state of Israel. (In his most recent letter,  David Noble urges Trump to open a real 9/11 investigation, pointing out that this would quickly lead  to criminal charges against former FBI Director Robert Mueller, who is currently leading an investigation of Trump.)

Is Trump reading Noble’s letters? Perhaps not…but people around the President definitely are…and taking them seriously. (Noble campaigned for Trump and has connections close to the White House.)

Some of the architects, engineers, and lawyers in the professional associations Noble works with have urged Noble to back off from the Israel-did-9/11 approach, and instead focus on the evidence for controlled demolition (and other evidence disproving the official story but not implicating any particular suspects). Noble disagrees, arguing that the “who did it” and “why they did it” are every bit as important as “how we know the official story is a lie.”

So who’s right? Listen to the interview and decide for yourself.