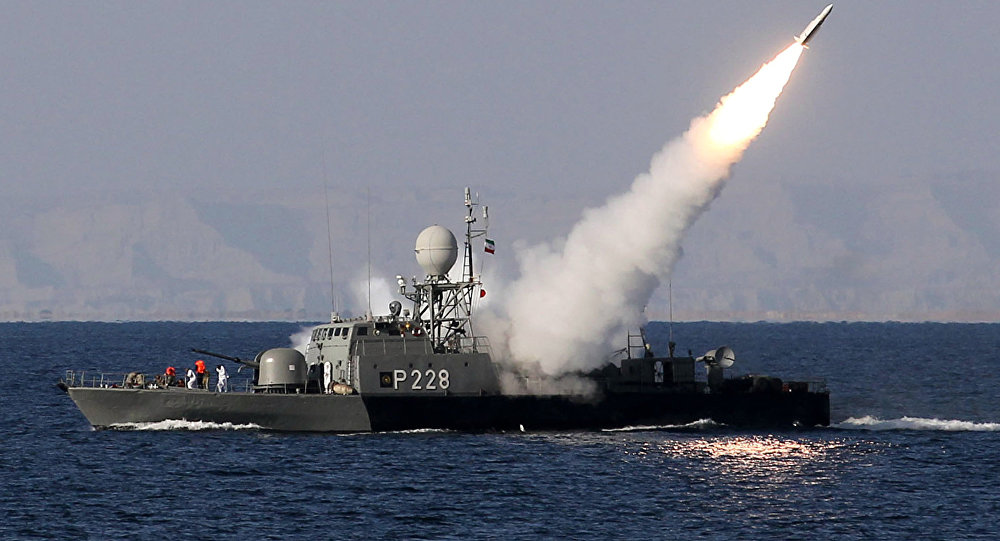 The situation in the Persian Gulf is on the pressing issues in the already tense relations between the United States and Iran. Washington has been increasingly building up its military presence in the region, thus provoking Iran for tough responsive actions.
Trump Setting Stage for War With Iran – US Advocacy Group

Earlier this week, US media reported that the USS Thunderbolt patrol ship fired several warning shots at an Iranian Revolutionary Guard Corps ship in the Gulf.”The Iranian vessel did not respond to repeated attempts to establish radio communications as it approached,” a source in the US Navy’s 5th Fleet told US Naval Institute News.

The Iranian boat sailed within 150 yards of US ships on Tuesday, according to the US Navy.

The Pentagon also released video footage of the incident.

The Iranian Navy said the US ship “fired two warning shots into the air with the aim of provocation and intimidation,” according a statement provided to Press TV. “The IRGC Navy’s ship paid no attention to the ‘provocative and unprofessional’ move by the US Navy and continued with its mission,” Press TV added.

All such maneuvers by the US military in the Persian Gulf are “unprofessional” and aimed at “demonstrating force,” a colonel of the Iranian Air Force told Sputnik Persian on the condition of anonymity.

According to the source, the recent incident was rather a “propaganda provocation” and an attempt to find a pretext for using force against Iran.

“At the same time, it was a clumsy attempt to find an excuse for the new anti-Iranian sanctions bill which is being discussed in Washington,” the source added.

Russia Sanctions Pass US Senate By a Landslide

Vessels of several countries simultaneously conduct patrolling missions in the northern part of the Persian Gulf, and their encounters are very likely.”In such a situation, firing warning shots was an excessive measure. Moreover, the US vessel was very close to the Iranian border. The Iranian Navy closely monitors the maneuvers of the US Navy because the region is strategically important,” the colonel said.

Commenting on the possibility of a US-Iranian conflict in the Gulf, the source suggested that it is highly unlikely despite the persistent tensions.

“Speaking hypothetically, if a conflict broke out in the Gulf it would affect the entire region. The Persian Gulf is the world’s largest oil producing region, with over 70 percent oil tankers passing there. A hypothetical conflict would be a threat to the global economy. The US is unlikely to do that,” the source said.

Ali Reza Rezakhah, an Iranian political commentator and expert in international politics, pointed out that the US is playing with fire in the Persian Gulf but there is zero possibility of a military confrontation.”The recent incident in the Gulf should be taken in its correlation with the developments in US domestic policy. Currently, President Donald Trump is being pressured as many senators and policymakers in Washington have challenged his legitimacy as national leader due to his alleged ties to Russia. As a result, the deeper these tensions are the more aggressive Washington’s foreign policy gets. This was not the first such provocation. But there is no reason for concern,” Rezakhah told Sputnik Persian.

The expert underscored that Iran has every right to protect its borders and the Iranian military is always on guard to deal with such provocative actions.

“Iran has a solid potential to deter aggression. The US understands that and will not engage in a conflict. Washington doesn’t want inexcusable losses. The US continues to stick to the military scenario of resolving the ‘Iranian problem.’ But it’s nothing but window dressing. Such a policy is aimed at discrediting Iran in the international arena. In practice, the military scenario will not be implemented,” Rezakhah concluded.