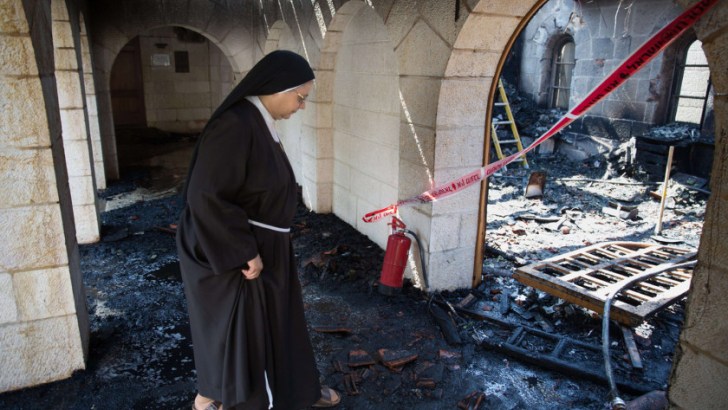 A month ago, after reading a desperate cry for help from the National Coalition of Christian Organisations in Palestine (NCCOP) addressed to the World Council of Churches, I emailed eight churches in my locality asking whether that heart-rending appeal had trickled down to them at parish level.

If not, I hoped to find out where the break in communications occurred, as this wasn’t the first time churches in the Holy Land had sought support from Western Christendom. Previous appeals were largely ignored and left to civil society for action.

Now, say the Palestinians, the situation is “beyond urgent”. So had the NCCOP’s latest plea actually arrived on the desks of parish priests in my neighbourhood? And if so, how were grass-roots Christians responding?

I included a link to the actual crisis document, which should have made every churchman sit up, and a gentle reminder that their faith and their job of work are rooted in the Holy Land.  “So what are the chances, I wonder, of seeing concerted action from Western churches before it’s too late? And what part can local parishes play?”

The key point was this: it’s beyond urgent. So are our spiritual leaders, those upstanding ‘men of the cloth’, mobilising their troops?

Only one of the eight replied — the local Catholic vicar-general — who dismissed the subject in two sentences. So there you have it. If this local bunch are representative of the Christian community in the UK, they don’t give a four-X for their brothers and sisters in the Occupied Palestinian Territories. And they are utterly indifferent to the fact that the place where Christianity was born is being stolen from under their noses.

If that’s a wrong interpretation, and Christians in the West do actually wish to help, the issue is straightforward enough. Churches in Palestine are asking churches here to call things as they are: to recognize Israel as an apartheid state in terms of international law and the UN report which says so. They are concerned that States and churches are still dealing with Israel on a business-as-usual basis, as if the situation were normal, and ignoring the criminal reality of military occupation.

Churches came together in opposition to apartheid in South Africa and helped end it. Why haven’t they done the same in Palestine?

They ask us to unequivocally condemn the Balfour Declaration as unjust, and they rightly demand that the UK asks forgiveness and compensates the Palestinian people for their losses. Theresa May’s government, however, plans to celebrate the centenary of the Balfour Declaration “with pride” and has invited Mr Netanyahu to the fun.

Clearly Mrs May, God-fearing churchgoer that she is, needs to feel the heat of His wrath. The woman is so arrogant that her government intends to appeal against the recent decision by the Royal Courts of Justice defending our right to boycott Israel.

End the ‘Ecumenical Deal’, put interfaith dialogue through the wringer

The Palestinians want us to take the strongest possible stand against any theology or group that seeks to justify the occupation. That means of course challenging our religious dialogue partners and withdrawing from those partnerships if they won’t condemn Israel’s brutal occupation.

But I can hear our canting clerics muttering: “Oh dear, no, no, no. We mustn’t upset our interfaith colleagues. That would never do.”

Churches that sell their holdings or otherwise divest from companies that profit from the occupation of Palestinian lands often take years of agonising confab to reach such a commonsense position.  But they needn’t think just moving their money is enough. A recent example is the Mennonite Church USA, where it took (they say) a three-person writing team and a 10-member reference group working intensely during the past two years and consulting widely across the church and with Palestinian and Jewish partners, to come up with a modest proposal. And to sugar the divestment pill they declared that “the legacy of Jewish suffering is intertwined with the suffering of Palestinians”. What the Palestinians had to do with Jewish suffering or ever did to deserve having their lands and homes confiscated, isn’t explained. But it is used to provide an excuse to call on Mennonites to strengthen relationships with Jewish communities.

Why? Can they not understand that you have to be consistent in boycotting Israel? It involves boycotting the people who also support and advocate for Israel including those who fail to condemn the Zionist regime’s vile policies that hurt our Palestinian friends. As George Galloway has said, you simply don’t engage with them.

Christians who cannot grasp what is really going on out there, and don’t see what is needed to stop it, might find Robert Cohen’s excellent article Brace Yourselves for Costly Palestinian Solidarity helpful in pointing towards proper, meaningful action.

He explains why the Christian-Jewish dialogue needs re-setting. Central to the problem is the so-called Ecumenical Deal, a reluctance to question Jewish support for Israel for fear of unpicking decades of interfaith reconciliation following the Holocaust.  We appear to have cast ourselves in the self-defeating role of repenting for age-old Christian anti-Jewishness. Breaking out of it and criticising Israel would be seen as a re-emergence of that anti-Jewishness.

I’m not aware of Christian anti-Jewishness although continuing failure on the part of Jewish leaders to condemn the cruel policies of the Israeli regime, aka ‘the Jewish State’, is surely asking for it. Does anyone inside or outside the bubble of the Church seriously buy into this repentence stuff? From outside, among people who would never set foot in a church again but still call themselves Christians because they were brought up according to the Christian code, it looks pathetic.

Christians in Palestine, says Cohen, despair of our Church leaders’ endless hiding behind the cover of political neutrality and their unwillingness to offend their religious dialogue partners. Consequently, he predicts, Jewish-Christian dialogue “is about to go through the wringer”.

Time for some ‘really uncomfortable conversations’

Pressing the re-set button means “refusing to allow your local Jewish communal leadership to set the boundaries of permissible debate on Israel”. It also means “listening to the Christian voice under occupation before the Jewish voice living comfortably, with full equal rights, many thousands of miles from that same occupation”.

Operating the wringer, of course, will be followed by a distinct chill in relationships forcing Church leaders, local ministers and their congregations, as well as the Jewish leaders they have dialogue with, out of their comfort zone. Good. As Rebecca Vilkomerson, Jewish Voice for Peace, recently wrote in Haaretz, after 70 years of dispossessing and expelling Palestinians, 50 years of Israeli military occupation and 10 years of blockading Gaza, it is time for Jewish communities “to have some really uncomfortable conversations”.

How does the World Council of Churches react to those urgent pleas from Palestine?

They will study and analyse. “As we at the WCC consider our plans for 2018 and beyond, we want churches in Palestine to know that their perspective is heard and it is vitally important,” said the WCC’s general secretary. “We will continue with the same passionate spirit to work on specific objectives, strategies and partners for advocacy to end the occupation and to work for just peace in Palestine and Israel.”

The WCC’s Commission of the Churches on International Affairs has been asked to contribute a thorough analysis of the changing political landscapes and dynamics in the Holy Land with an eye toward developing a more specific advocacy strategy that works through nations and organizations with significant influence.

WCC has also started an online campaign, Seek #JusticeAndPeace in the Holy Land, which features profiles of peacemakers and various cries for justice.

WCC also plans to “explore theological reflections, studies and projects that will bring a perspective on just peace in the Holy Land from all parts of the world”, and strengthen communication about the situation in Palestine so that it can “help churches and other ecumenical partners address their constituencies and governments in a more systematic way”. This includes developing a set of principles and practices of responsible pilgrimages of justice and peace to the Holy Land.

Will the Palestinian churches be impressed? Their cry for help stated specifically: “We stand in front of an impasse and we have reached a deadlock. Despite all the promises, endless summits, UN resolutions, religious and lay leader’s callings, Palestinians are still yearning for their freedom and independence, and seeking justice and equality.”

They stressed that religious extremism is on the rise, with religious minorities paying a heavy price. “We need brave women and men who are willing to stand in the forefront. This is no time for shallow diplomacy Christians.”

When I called the Church of England press office yesterday they didn’t think any response had been made. Such concern, then. And when I ran through the members of the WCC’s Central Committee I noticed the two representatives from the Church Of England were both based in Europe. How helpful is that?

The power of hope

Christianity sometimes has great trouble telling right from wrong and doing something about it. The Holy Land is a case in point. Evil reigns there. Christianity across the world cowers. What would Christ say to that?

I know what Michel Sabbah says. He is a former Catholic Patriarch of Jerusalem, a courageous man of the front line and one of the great heroes of the struggle.

“The current situation is hopeless. In reality, there are no signs of hope at all for the Palestinian people. In spite of that, we hope.

We hope because Palestinians are persevering in claiming their rights.
It is a source of hope that we never gave up….

We hope because among Israelis, there are people who are trying to work with Palestinians for what is right. And there are an increasing number of movements for peace, strong in will….

If we had no hope we would not live. Hope is life, and history gives us hope. What is right will prevail.”

I fear that if he pins any hopes on the wets of the Western churches he’ll be disappointed. But he already knows that, surely.