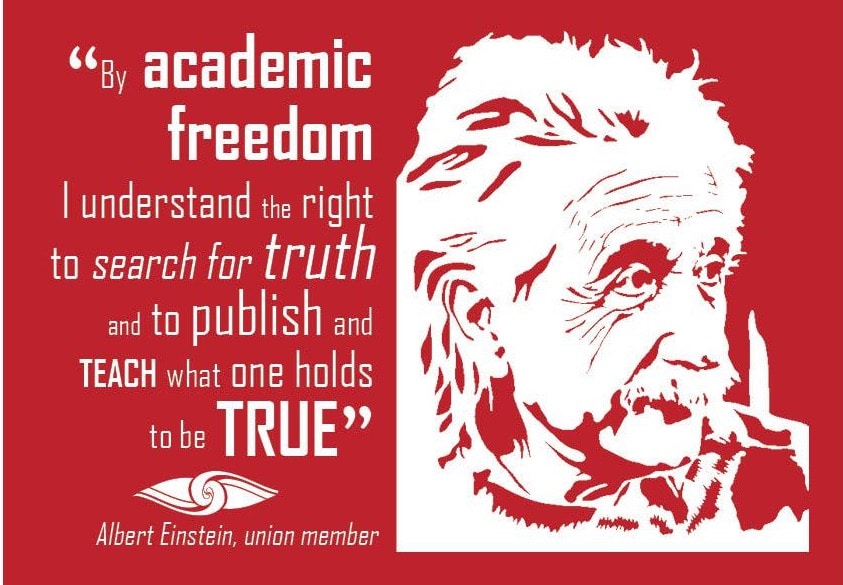 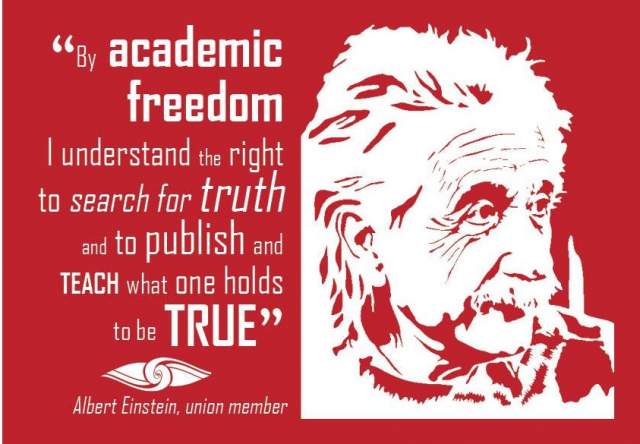 An Open Letter to Pres. Mike Mahon on His Suspension of Academic Freedom in Alberta Canada, written and sent by Andrew Blair, Ph.D.

The lines of the contention are drawn on the eve of court proceedings beginning on August 8.

I have always found universities to be the most wonderful of places. There is always so much going on, so much to do, and so much to learn. And, best of all, they normally encourage critical thought.

The Canadian Charter of Rights and Freedoms guarantees freedom of conscience and freedom of expression. While these freedoms are not unlimited they can only be limited, according to Section 1 of the Charter, by “such reasonable limits prescribed by law as can be demonstrably justified in a free and democratic society.”

These fundamental freedoms are not cast off upon entering the workplace, especially not tax-supported workplaces engaged in education. In suspending Professor Hall, you have kept him out of the classroom, thus suppressing his freedom of expression and opposing his conscientious attempt to defend the oppressed of the world. In addition, I have reason to believe that you have augmented the intimidation that other academics feel, resulting in self-censorship.

I imagine that you believe that the actions that the university administration has taken do place justifiable limits on Professor Hall’s fundamental freedoms. If “anti-Semitic” were an accurate description of Professor Hall’s views it would indeed provide some support for such a limitation. But a very warped understanding of prejudice is required in order to make the description fit. It is akin to accusing someone of being anti-Christian because they say that residential schools were responsible for sexual abuse.

Moreover, it astonishes me that the complaint against Professor Hall to the Alberta Human Rights Commission makes claims which purport to be facts that take the side against Muslims, thus maligning them as a religious group in a far more stereotyping way than anything Professor Hall has said about Jewish people. For example, the complaint simply states, as if it were an established fact, that the attacks of September 11, 2001 were committed by “Islamic terrorists”.  (Here is a partial image of the complaint.) This is a widespread belief propagated by the U.S. government, but how do we know it is true? Are you able to cite some peer-reviewed articles that offer evidence for the belief? Are there peer-reviewed articles which grapple with the counter-evidence?

Aside from the prejudicial assumptions of the complaint, the logic is faulty. It supposes that if “Islamic terrorists” did 9/11 then the Israeli government was not involved. The term “Islamic terrorist” is an overly vague stereotype and the conclusion is a non sequitur. One plausible scenario, not envisaged by the complaint, is that the 19 9/11 hijackers, from Muslim countries like Saudi Arabia, were CIA assets labelled “Islamic terrorists”, used by deep state agents within the U.S. and Israeli governments as patsies in a false flag operation.

Until universities have given all arguments about 9/11 a fair hearing, including those to which Professor Hall subscribes, the public cannot know whether the official narrative is true. The very action you have taken against Professor Hall undermines the possibility of arriving at knowledge about this with even a minimal degree of certainty.

It is utterly against the spirit of democracy for a university to pronounce without evidence on a matter such as this, and then suppress the voice of those who have a different view. How can the truth emerge if some of the arguments are forbidden? Surely universities should endorse no institutional position about such matters, but encourage respectful dialogue, and defend the academic community against all who engage in character assassination.

The conflict between the university administration and Professor Hall is not merely a tempest at the University of Lethbridge. It is an episode in the development of “inverted totalitarianism,” to use a term coined by the political philosopher Sheldon Wolin. Such a political system pays lip service to freedom and democracy, while at the same time undermining it by management of public perception.

This tempest is not a matter of academic interest only. Lives are at stake. In this connection I refer you to an opinion piece of mine, titled Peace, Democracy and Academic Freedom, that was published in the Lethbridge Herald. It mentions that tens of millions have been killed in the post-9/11 wars in the Middle East. I did not arbitrarily make up this up. The source is Gideon Polya’s estimates, which include avoidable deaths caused by war, and not just deaths caused by direct violence.

I do not blame you if you do not see this tempest as I do, but my challenge to you is that you find a way to restore the reputation of the University of Lethbridge as a place of academic freedom, as identified as such in the Destination 2020 vision and strategy statement. I have a suggestion about how to do this. Hold a conference at the university, titled something like this: “Sifting Truth from Falsehood in Competing Conspiracy Theories: The Role of Academic Freedom and Responsibility”. (The official narrative of 9/11 is, itself, a theory about a conspiracy.)

If anyone else has some suggestions please feel free to make a comment on this letter. You could reply by email, but I would prefer that you make your comment public by posting in the comment box below this post of this email.

For anyone who wants more background on this case you could go to the home page of Academic Freedom and Responsibility. This site is being constructed by me and it is still under construction. My apologies to anyone who finds its structure to be confusing.

The opinion piece, Peace, Democracy and Academic Freedom, published on July 15, 2017 in the Lethbridge Herald, is very much related to this open letter. It makes the point that leaders of democratic countries are tempted to deceive the public when they want to go to war but the populace wants peace. Academic freedom provides a crucial constraint on this temptation.

If you are interested in pursuing still more detailed ideas about all this, you might want to look at my response to Gabrielle Brenner, who commented on a post of Professor O’Donnell’s.

Once again, President Mahon, I urge you to change course and uphold the principles which underpin democratic decision making. At this point changing course may be very difficult, but it is still possible to snatch integrity from the jaws of confusion. Why not have a conference in which the university community itself can address the issue of academic freedom and responsibility? We might all learn a lot from each other.

P.S. For those cc’d on this open letter, I am trying to draw attention here to the relation of academic freedom to democratic decision making, but there is an additional issue that the University of Lethbridge Faculty Association is trying to address: the obligation to fulfil contractual agreements.

In this connection I see that the University of Lethbridge Faculty Association has published a notice of a public court hearing on Aug. 8, 2017, at 2:00 pm. The Board of Governors is arguing that there should be a judicial review of Alberta’s Post-Secondary Learning Act, which they regard as giving the president the right to suspend Professor Hall without following the procedures laid down in the Faculty Handbook. But an arbitrator has already been appointed by the Alberta Labour Relations Board to resolve the matter, and so the Board seeks a stay of the arbitration process until the judicial review has been completed. The faculty association is arguing that there should be no stay granted, and that there is no need to review the law at all.