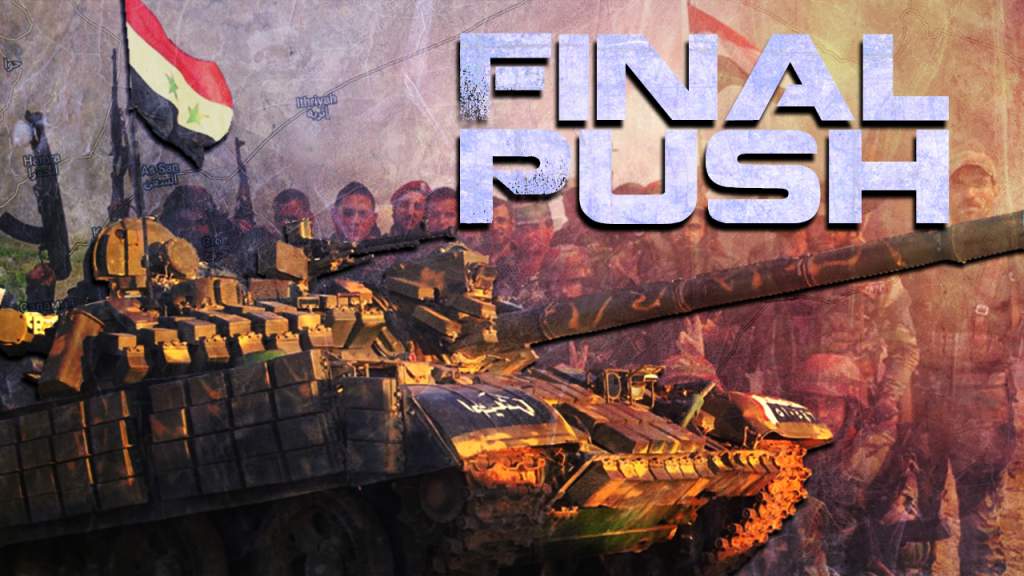 On Wednesday, the Syrian Arab Army and the National Defense Forces (NDF) began a direct storm of the ISIS—held town of Sukhna at the Palmyra-Deir Ezzor highway.

Government forces captured the ISIS fortifications south and west of the town, stormed the southwestern entrance of the town, and captured several buildings. Syrian and Russian warplanes and attack helicopters supported the advance.

According to reports, a majority of the ISIS fighters withdrew from Sukhna last week, but dozens of them decided to stay in the town to defend it. Most of these fighters are suicide bombers and snipers.

On Thursday, clashes in the area continued as government forces made additional efforts towards securing the town. If the SAA and NDF are able to fully control the Sukhna area, government forces will be able to cut off supply lines leading to a collapse of the entire ISIS defense in the eastern Hama countryside.

The ISIS-linked News Agency Amaq claimed on Thursday that 32 Syrian soldiers were killed as a result of an attack on SAA positions east of Salamyah. According to Amaq, ISIS fighters captured 6 SAA checkpoints near Al-Mafkar village and an SAA HQ in the Olive Press. During the attack, ISIS fighters also managed to capture a tank, two bulldozers, two 23mm guns, two cars loaded with ammunition, and several vehicles.

The Syrian Defense Ministry announced that 330 vehicles, 3 battle tanks, 11 artillery pieces, 5 machine guns, 12 headquarters, and 3 weapons and munition depots belonging to ISIS were destroyed during the recent operations near the Euphrates River in the southern Raqqah countryside. Government forces are now developing momentum in an attempt to consolidate the recent gains and to take control over additional important points in the area.

Hayat Tahrir al-Sham (HTS) announced that its special operations forces infiltrated the Mallah area in western Aleppo and killed some 20 pro-government fighters, injured 10 others, and damaged a BMP vehicle. According to pro-government sources, the SAA and NDF repelled the infiltration attempt and inflicted heavy casualties upon the terrorists.

The Syrian government has reportedly disbanded the Desert Hawks Brigade (Liwa Suqur al-Sahara). The decision followed a series of the questionable events linked to the group. The Desert Hawks Brigade had been temporarily deployed to the eastern Hama countryside for a widely-expected operation to liberate the ISIS-held town of Uqayribat. However, the brigade withdrew from the area after a few days of fighting. According to local sources, tensions with the SAA and other pro-government units were the reason behind the decision.

Members of the Desert Hawks Brigade will reportedly have an opportunity to join the SAA 5th Assault Corps, the Qalamoun Shield Forces, or other pro-government units. The Desert Hawks Brigade’s commander, Colonel Mohammad Jaber allegedly left Syria and is now in Russia where he and his brother, Aymen al-Jaber, have some property.