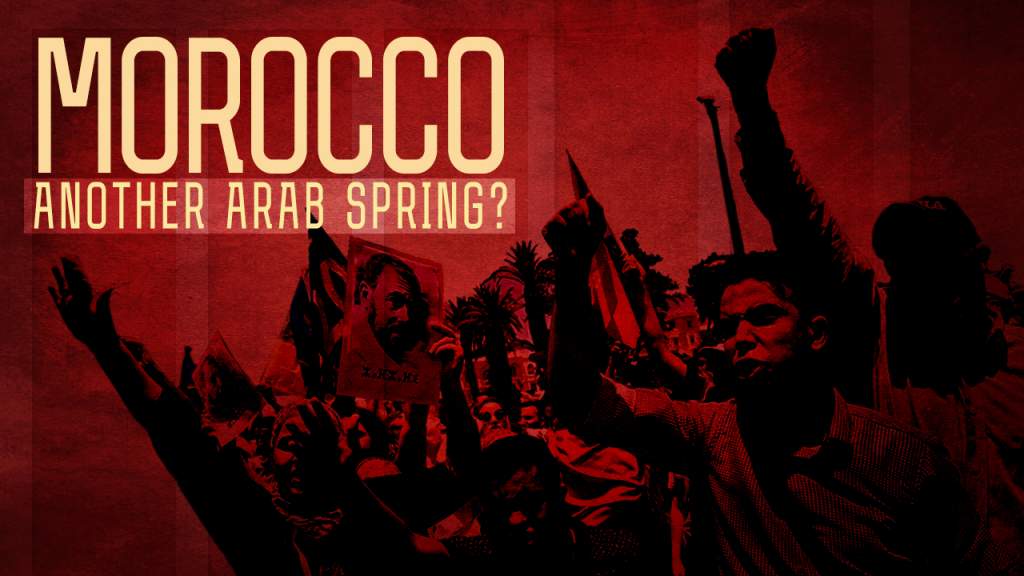 In nearly every case of a forcible, West-led, regime change in the Middle East or Ukraine, the process began with low level public protests against a real or imagined abuse of power by security forces. Morocco’s current situation appears to follow the same scenario. The killing of Mouhcine Fikri, a fisherman who was crushed by a truck while attempting to retrieve fish that was confiscated by the police in October 2016, had sparked several waves of unrest and civil disobedience initially in the city of Al-Khoseima which later spread to other parts of the Rif region.

Zefzafi, moreover, demanded to enter into negotiations with the king himself rather than his representatives, a demand that was bound to be rejected due to its unprecedented nature. Interestingly, Zefzafi accused the king of having entered a scheme with Gulf Arab states in order to settle Arabs in Morocco, thus displacing the native Berbers.

Morocco’s government responded by dispatching a delegation with promised 1 billion euro over the course of five years and by accusing the protesters of separatism and, on May 29, arresting Zefzafi and other protest leaders who now stand accused of promoting separatism, encouraging rebellion, obtaining financial support from foreign powers, attempting a forcible regime change, which under Morocco’s criminal code may be punished by death.Ultimately 32 of the key activists were sentenced to 18 months of prison, while others received 2 or 3 month sentences.

Alas, far from tamping down on the unrest, the trial proved a rallying point for a variety of forces which hope to capitalize on the protests and turn them to political advantage. About 600 attorneys representing the vast majority of legal offices in the country expressed willingness to challenge the ruling. In Rabat there was held a solidarity protest with up to 40 thousand participants which included such organizations as the February 11 Movement which appeared during the original Arab Spring, the Istiqlal Party which is now much diminished in spite of having won the country independence in the 1950s, and the Al Adl Wa Al Ihssane (Justice and Spirituality), a semi-legal Islamist association, which is tolerated by the Moroccan authorities. It also took part in protests of the Arab Spring with the slogan of introducing Sharia law in Morocco which refuses to participate in the legitimate political process and has a strong presence in Rif. Mohammed VI, clearly not wishing to see the situation escalate into bloodshed, recognized the right to protest and indicated the need to investigate why the 650 million euro development plan for Rif was not implemented.

Indeed, the economic situation in the Rif region is the reason why so many segments of society jumped on the bandwagon of protest, which is a recurring phenomenon in this part of Morocco. The most important form of economic activity is the…cultivation of cannabis and smuggling of Latin American narcotics from West Africa. Even though this is fairly lucrative trade, little of it trickles down to ordinary citizens, with government officials being accused of skimming off the profits. The poverty also prompted many of the region’s young men to join various terrorist factions in Iraq and Syria, and with the fighting in these two countries slowly coming to a close, these men now pose a threat to the long-term stability of Morocco.

Morocco is fortunate in that, unlike in the other cases of regime change, the wave of protests did not coincide with an effort by the US or other Western powers to overthrow its government. Washington appears pleased with the monarchy and is not calling on Mohammed VI to step down. Morocco’s main strategic rival is Algeria which seeks to wrest away Western Sahara, but is in no position to mount major actions of any kind. The unrest in Morocco did coincide with the Saudi-Qatari confrontation and, considering that various Moroccan factions have ties to either Saudi Arabia or Qatar, the future of this country’s politics will be influenced by the outcome of the Gulf power struggle. Mohammed VI is fairly close to the House of Saud and the UAE which are major investors in Morocco (investments in 2016 France – 22%, UAE – 15,2%, SA – 11,2 %, USA – 9,6%, Qatar – 7,8%). According to some experts, in this situation, protests could be initiated by Qatar through several religious movements which are under its control.

One of the weakest aspects of royal power is the religious sector. The king has complicated relations with Islamic movements within the country. After the terrorist attack in Casablanca in 2003, Mohammed VI began actively strengthen personal power in religious institutions trying to achieve firm control over the religious sector. During his reign, new Islamic governance bodies were established, and many Islamic research centers were opened. Currently Mohamed 6, being a direct descendant of the Prophet Mohamed, is viewed as the highest religious authority in the country and the commander of the faithful (amir al-muminin). He positions himself as a defender of traditional moderate ‘maliki’ Islam. The Mohammed VI Institute for the Training of Imams, Morchidine and Morchidate, which was established in 2015, annually trains hundreds of imams from Nigeria, Chad, Guinea, Côte d’Ivoire, Tunisia and France. Morocco, along with Egypt and Saudi Arabia, is one of the world leaders in the field of Islamic education. This allows the country to influence foreign states. However, the king was not able to substitute fully for his control of the religious sector.

According to some experts, a significant part of Muslims within the country are affected by the Muslim Brotherhood and Qatar. Qatar’s possible link to Morocco’s politics is the Party of Justice and Development (PJD) which has been pressing the king to relinquish part of its powers by allowing a new constitution. The PJD leader Abdelilah Benkiran for several years (November 2011- april 2017) was the prime minister of Morocco. The current prime minister Saadeddine Othmani is the incumbent PJD Secretary-General. It is known that PJD has ties to the Muslim Brotherhood. Though PJD didn’t take part in the protests and there is no direct evidence Qatar was involved in stoking the protests, Qatar’s involvement cannot be ruled out. The Moroccan protests would have been advantageous to Qatar as a means of demonstrating the country’s ability to destabilize Morocco and therefore compel the Mohammed VI to stray from his Saudi-friendly position and, indeed, Morocco has not joined the Saudi economic and political blockade of Qatar.

For the moment, Morocco’s political future is not facing any clear threats. The country’s economy is performing reasonably well and the king is popular and has the backing of the army and security forces. The wild card, as usual, is the United States which has been known of turning on its own allies without a moment’s notice in order to achieve its economic objectives. It is possible that Morocco owns a golden share in the current conflict in the Gulf, this may affect the future of Morocco which may yet find itself the battleground for the struggles between the world giants. The Rif protests may have been simply the first volley of that war.