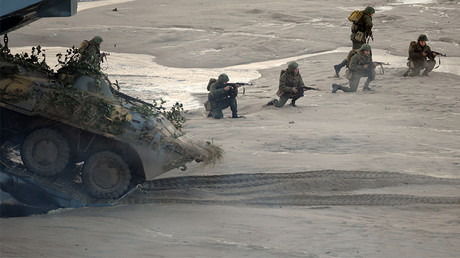 The US military is shifting towards a “more global” exercise program in preparation to deter what they term a “more assertive Russia” as well as countering other complex threats, a senior officer commanding the US forces in Europe has said.

“What we’re eventually going toward is a globally integrated exercise program so that we (are)… all working off the same sheet of music in one combined global exercise,” Air Force Brigadier General John Healy, who directs the drills of US forces in Europe told Reuters.

Healy said troops need to be prepared for increasingly complex threats across all domains of war – land, sea, air, space and cyber sphere. The general went on to say the training must include rehearsing possible conflicts and take into account the global nature of the military threats facing the US.

The goal of the Pentagon is to hold exercises that would involve troops from all nine US unified combatant commands instead of being limited to a specific region or a military branch, he said. Such drills could be staged as early as 2020, he added.

Healy said Russia was his primary concern in Europe and expressed the West’s unease over the September Zapad-2017 exercises involving Russian and Belarusian troops.

The US general, citing ‘experts’, claimed the joint Russian and Belarusian drills could involve about 100,000 soldiers. He then criticized Moscow for being “non-transparent” in its military exercises, referring to the the fact that Russia has not invited US and NATO observers to its war games.

“They’re not being as transparent as we are,” he said, adding, that Russian observers attended the recent US and NATO drills in the Black Sea region.

Healy, though, is not the first high-ranking US officer to speculate about the upcoming Russia-Belarus drills. Last month, another top military official, Lieutenant-General Ben Hodges, commander of US Army forces in Europe, called it “a Trojan horse” and said “people are worried” about the exercises.

Earlier, the Polish Ambassador to the US, Piotr Wilczek, claimed the maneuvers are potentially dangerous for Ukraine and other regional countries. The Baltic States also seemed to be particularly concerned over the drills as Estonia planned to host more US and other allied troops in light of the war games while Lithuania issued a report claiming it could be a provocation against the Baltic state.

Moscow and Minsk have repeatedly issued assurances surrounding the planned war games. The joint exercises pose no threat to any other country and are defensive in nature, the Belarusian defense minister Andrei Ravkov said in July. Ravkov also pointed out that Zapad-2017 is far less modest than the Anaconda drills in Poland last year. Zapad-2017 involves around 12,700 troops alongside 680 pieces of weaponry compared to the more than 30,000 soldiers from NATO states and their allies with 3,000 items hardware involved in the 2016 NATO drills.

While the planned scale of the war games is below the threshold that requires the invitation of foreign military observers, the Belarusian foreign ministry spokesperson said last month that invitations will still be sent to military attaches accredited in Belarus.

Russian deputy foreign minister Grigory Karasin denounced the allegations concerning the drills by saying that they are aimed to “artificially justify” the NATO military buildup around Russia.

The alliance’s buildup includes the modernization of airfields, ports and other military sites, as well as the deployment of new elements of the US missile defense system, Russia’s defense minister Sergey Shoigu said.

In June, Shoigu also expressed concerns over NATO’s “unjustified actions” and the “blatant unwillingness” of certain Western states to stop “pursuing an anti-Russian agenda” which together “leads to [an] erosion of the global security system.”

‘Trojan horse’: Top US commander in Europe says Russia might use Belarus drills to move weapons

In mid-July, less than a week before the bloc’s naval drills in the Black Sea, NATO forces staged drills in Romania. On June 19, British, Polish, American and Lithuanian troops took part in military exercises on the border between Poland and Lithuania, “protecting” NATO’s soft spot from the “Russian threat” for the very first time.

Around the same time, another 10-day NATO exercise called Iron Wolf was staged in Lithuania. The two drills were part of a broader NATO exercise known as Saber Strike, playing out in the Baltic states and Poland, also aimed at deterring the alleged “Russian threat.”

And if this was not enough, the US military for the first time, deployed Patriot anti-aircraft systems to Lithuania as part of the ‘Tobruq Legacy 2017’ air defense drills in July. 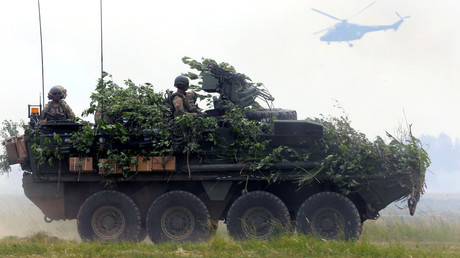 In his interview with Reuters, Healy confirmed that over 40,000 US and allied forces took part in the various military maneuvers performed across Europe this summer, adding, that the initial assessment of the exercises was positive.

The military buildup trend is apparently catching on. Sweden, which is not a NATO member, plans to hold what it calls the “first and largest” exercise of its kind in over 20 years involving all of its military branches together with several NATO members in September.

Healy also offered a glimpse of some of the US military’s plans for next year. It involves 11 major exercises bringing together air, ground and naval forces that will be held in a number of the European countries, including the UK, the Baltic States and even Finland, which like Sweden, is also not a NATO member.